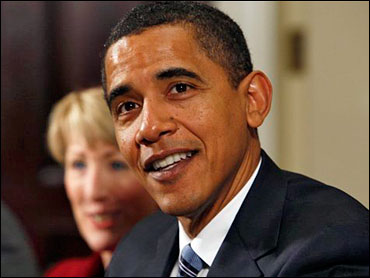 "We don't have a moment to spare," Mr. Obama said in the East Room of the White House, just hours before a crucial House roll call vote. The measure intended to steady the ricocheting economy was expected to pass, but likely with little of the bipartisan support that Mr. Obama wanted. The issue then goes to the Senate where the new president hopes to draw more GOP backing.

Mr. Obama tempered the sense of urgency in his voice with his observation that he and corporate leaders "left our meeting confident that we can still turn our economy around."

His brief remarks were designed to put his stamp on the debate while the action was taking place at the other end of Pennsylvania Avenue.

During his talk and in the earlier Roosevelt Room session with business CEOs, Mr. Obama said the people running the companies that are the engine of the American economy are behind him. Asked at one point if he was confident of getting Republican support, he replied only: "I'm confident we're going to get it passed."

But while popular perception is that Mr. Obama's plan enjoys wide support among economists, CNET's Declan McCullough writes that there is substantial skepticism in the field about the stimulus package's prospects for success.

There does seem to be one thing most can agree on, though - something needs to be done.

"I think the vast majority of economists on the liberal side, the conservative side, think we do need a stimulus along with other policy steps. But we need stimulus," Mark Zandi, of Moody's Economist, told CBS' The Early Show Wednesday.

Mr. Obama has spent his first days in office trying to drum up bipartisan support for his expensive and expansive plan to help pull the country out of the year-old recession. It's the first major test of Mr. Obama's presidency; how he handles the volatile situation, and the effect of his stimulus package on the economy, could well set the tone for his presidency.

The House measure includes about $550 billion in spending and roughly $275 billion in tax cuts in hopes of spurring the economy and helping those directly affected. Much of the spending would be for items such as health care, jobless benefits, food stamps and other programs that benefit victims of the downturn.

On Capitol Hill, a day of debate on the measure opened with most Democrats pressing for passage and trumpeting the measure as the elixir for what ails their jobless constituents; Republicans generally griped about "insane" programs that would be funded in the plan and "minuscule" tax relief for small businesses as they urged opposition.

"We need to address this economic crisis head on," said Rep. Doris Matsui, D-Calif. "This package is a substantial step forward."

"This package before us is badly flawed," countered Rep. David Dreier, R-Calif., who also lambasted Democrats. "It appears that there is very little focus on the merits and most of the attention is focused on politics," he said.

House Minority Leader John Boehner wouldn't say how he thought the vote would turn out. He did emphasize anew that GOP members are worried about billions in domestic spending that "has nothing to do with creating jobs or preserving jobs."

Senate GOP leader Mitch McConnell of Kentucky told CNN that "where we have differences with the House Democrats is that the package just doesn't seem to reflect our priorities, nor the president's."

McConnell said the proportion of tax cuts versus spending increases in the version being pushed by Democrats has been "crammed down" to about 20 percent of the total instead of the 40 percent envisioned by both Republicans and Mr. Obama.

Congressional leaders have promised Mr. Obama they would send him the measure by mid-February.

In his remarks, Mr. Obama called on everyone - corporate executives and factory floor workers, educators and engineers, health care professionals and elected officials - to abandon a "sense of irresponsibility that prevailed from Wall Street to Washington."

And he said his administration would make certain the money would be spent in full view of the public, with ways to check where it goes and how it will be used - a nod to skepticism about the "size and scale" of the plan.

He left no doubt that he means to see it signed into law, and quickly - and that he thinks those who stand in the way will suffer the wrath of angry voters.

"All we can do, those of us in Washington, is help create a favorable climate in which workers can prosper, businesses can thrive, and our economy can grow," Mr. Obama said. "And that's exactly what I intend to achieve - soon."