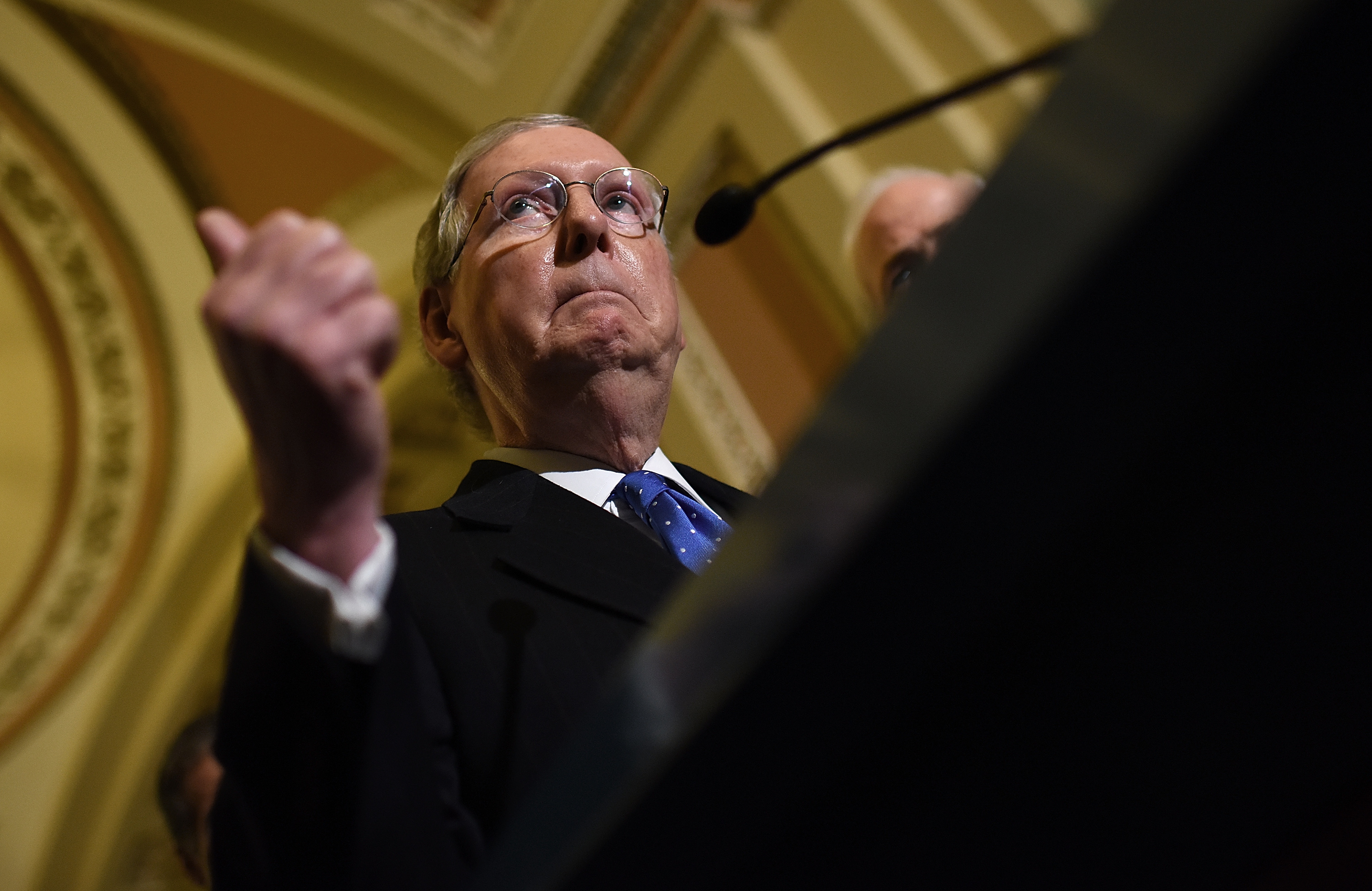 Republicans are plenty outraged about President Obama's plan to defer deportations for millions of immigrants in the U.S. illegally. What they don't have, however, is a plan to stop it.

"If President Obama acts in defiance of the people and imposes his will on the country, Congress will act," Senate Minority Leader Mitch McConnell, who will be the majority leader in January, said Thursday. "We're considering a variety of options. But make no mistake -- make no mistake -- when the newly elected representatives of the people take their seats, they will act."

The biggest problem angry Republicans face is a lack of viable options. To defeat the president, they'll probably have to get creative -- and maybe marshal some Democratic support along the way.

There are three avenues for chipping away at his actions: legislation, litigation, and the budget, but some of those may dead end. Otherwise, they will have to wait for a president who wants to undo whatever Mr. Obama did.

"Congress could pass a law that purported to bar the president from providing certain forms of relief to people who are expected to receive relief under the program," New York University Law Professor Adam Cox, an expert in immigration and constitutional law, told CBS News. "That is not a very promising pathway for them because it seems obvious that the president would veto, if you had a standalone piece of legislation."

Litigation can be a difficult road because Congress would have to find someone who has the standing to challenge the president's actions in court. Federal courts require the party bringing the suit to prove concrete injury, which members of Congress would be hard-pressed to do.

A group of Immigration and Customs Enforcement agents tried to sue former Homeland Security Secretary Janet Napolitano to stop the Deferred Action for Childhood Arrivals program, known as DACA, which deferred deportation for certain young immigrants brought to the U.S. as children. But a federal judge dismissed the lawsuit in 2013, arguing that the agents lacked the necessary jurisdiction. Some one million of the immigrants who will gain relief under the president's latest order will do so because the age limits on the DACA program are being removed.

Other Republicans may try to bring their case to the courts: Texas Gov. Rick Perry said Wednesday at the Republican Governors Association meeting that "it's a very real possibility" that Texas will sue the federal government after Mr. Obama implements the executive action. Gov. Scott Walker, Wisconsin's Republican governor, agreed the Republican Party should go to court over the issue.

Leveraging the power of the purse is Congress' last avenue for trying to block the president.

Often, if the president is directing an agency to behave in a way that Congress frowns upon, it can use appropriations bills --which usually fund those agencies -- to give specific instructions about what they can and cannot use the money to do.

This action will be trickier: U.S. Citizenship and Immigration Services (USCIS), the agency which will be in charge of fielding applications for deportation deferral, is entirely self-funded by the fees it collects on immigration applications, with the exception of the employment verification program.

In short, the Committee is admitting that USCIS holds its own purse strings and is perfectly free to carry out the president's expansion, even if Congress doesn't like it. To change that fact would require Congress to pass a law changing the way it is funded. Even if that happens, the president could veto the bill. And even if the issue forces a government shutdown, USCIS would not be shuttered because it would still be collecting those user fees and funding its operation.

There will be at least a few Republicans willing to try, however, including Rep. Steve King, R-Iowa, who accused the committee of offering up a "red herring" argument to deflect blame. There will also likely be lawmakers who say Congress should refuse to pass any spending bills to keep the government open unless the president rescinds his actions on immigration.

"What the fight is really going to be about is how this really unfolds in the budget process," Cox said. "That's really about bargaining and brinksmanship" -- frequent characteristics of our recent politics - "so it's not inconceivable that would happen."

McConnell, who will be the majority leader next year, has ruled out a shutdown, but House Speaker John Boehner has not. The White House is also steering clear of making any promises.

"It certainly would not be a proposal that the president would support, obviously," White House spokesman Joshua Earnest said Wednesday of any government funding bill that attempted to block the president from taking immigration relief into his own hands. "But I think we would evaluate these individual proposals on the merits before we made a final decision."

Democrats are also waiting to figure out how they'll respond to any Republican attacks on the president's actions. Although they will no longer hold the Senate majority come 2015, the Republicans will have less than 60 seats, which still allows Democrats to create some procedural havoc.

"Why don't we just wait and see what they're going to do?" outgoing Majority Leader Harry Reid, D-Nevada, said of the Republican response.

That leaves the GOP with a limited number of options, unless they are willing to take some confrontational measures.

In an interview on Fox News Wednesday, Sen. Ted Cruz, R-Texas, said that the Senate should refuse to confirm a single judicial or executive nominee other than vital national security positions unless the president stops his "illegal amnesty."

"Now, that's a big and dramatic step. It's never been done before in Congress but the framers put in place checks and balances and the confirmation power is a tremendously potent authority given to the Senate. The Senate Majority Leader has the unilateral ability to stand up and say if you defy Congress, if you defy the constitution, if you defy the American people, none of your nominees will be confirmed," Cruz said.

And then there's the ultimate step: impeachment.

Many Republican leaders say their party won't go there. But that isn't stopping some members from bringing it up.

"Nobody wants to go down that route," King told CNN earlier this week. "If that should happen...we have constitutional authority to do a string of things. That would be the very last option but I would not rule it out."