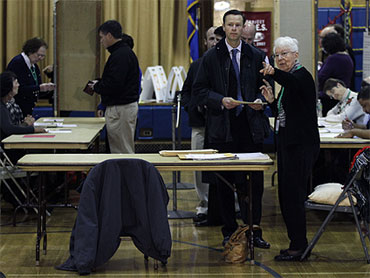 The fate of the Democratic Congress was put before voters Tuesday in midterm elections that drew Americans to balloting stations starting before dawn, some clamoring for change, others digging in their heels against resurgent Republicans. Expectations took hold in both camps that the political order was in for a makeover in these anxious times.

"This is going to be a big day," House Republican Leader John Boehner, likely to become speaker if the GOP wins the House, said after voting at a church near his West Chester, Ohio, suburban home. He said that for those who think the government is spending too much and bailing out too many, "this is their opportunity to be heard."

The control of Congress will come down to two key numbers - 10 and 39. For a majority in the Senate, Republicans need to pick up an additional 10 seats. In the House of Representatives, the magic number is 39.

It's a near certainty the GOP will be able to hit that goal in the House. The only question is whether they can pick up a win of epic proportion, wresting 60 or more seats from their Democratic foes, reports CBS News correspondent Nancy Cordes.

In the middle-class Cleveland suburb of Parma Heights, Ohio, Fred Peck, 48, explained his vote for Republicans - and by extension against President Barack Obama's agenda - by pointing to a 20 percent increase in his health care premiums and the declining value of his retirement fund. "I see nothing changing for the better," said Peck, who works in university campus maintenance.

In Miami's liberal Coconut Grove neighborhood, teacher Steve Wise, 28, voted for independent Charlie Crist for the Senate and Democrats for other offices. Mostly, he welcomed the end of a national campaign so often toxic in its tone. "I just want this day to be over," he said. "Because it's been too much - political ads, newscasts, too much talking heads. I just want to move on and get this country back."

In Pelham, N.Y., Raymond Garofano, 66, who works in packaging for Revlon, voted a straight Democratic ticket and allowed that Obama "is doing an adequate job. Nobody's perfect."

The president gave a series of radio interviews, geared in part to urban black audiences, encouraging traditional Democratic supporters not to sit on the sidelines. "Even though my name is not on the ballot, my agenda is going to be dependent - our agenda is going to be dependent - on whether folks turn out and vote today," he told the "Radio Big Boy" show on KPWR in Los Angeles.

"Across the board, things have gotten better over the last two years," he said. "We can only keep it up if I've got some friends and allies in Congress and in statehouses." He planned a post-election news conference Wednesday afternoon.

Republicans buoyantly forecast that they would win the House and usher in a new era of shared governance, two years after Democrats sealed victory in the presidency, the House and the Senate and set about reshaping the agenda in a time of severe recession and war. Democrats did not seriously dispute expectations that they would lose the House this time, even while campaigning through the final hours to stem losses.

Democrats tend to be strong closers, with a vaunted operation by the party, Mr. Obama's organizers and unions to get supporters to voting sites on Election Day. This time, they faced a ground game infused by the tea party, less polished than the other side but full of energy.

The midterm elections are a prime-time test for that loosely knit and largely leaderless coalition, a force unheard of just two years ago. Tea party supporters rattled the Republican establishment in the primaries, booting out several veteran lawmakers and installing more than 70 candidates, nearly three dozen of whom are in competitive races Tuesday.

If successful, that conservative movement could come to Washington as a firewall against expansive federal spending, immigration liberalization and more, as well as a further threat to the historic health care law that Republicans hope somehow to roll back.

Democrats have had to struggle against apathy by their supporters and many who motivated themselves to vote Tuesday sounded lukewarm about Mr. Obama even as they cast ballots for his party.

"I think he's doing OK, I wouldn't say great, I wouldn't say horrible," said Heather Walczuk, 26, a social worker in Manhattan. She moved from Virginia a few years ago and used to vote Republican but has changed. She reported that her mother recently joined the tea party. "I don't think she fully, really, knows what exactly she's involved in or everything that they stand for," she said.

At a precinct in Windsor Heights, a western suburb of Des Moines, Iowa, several voters said it might be a good thing to have Democrats and Republicans sharing power, and Mr. Obama's reach curbed.

"I voted mostly Republican," said Jodi Alberts, 47, an insurance company worker. "I think some of his policies are a little bit too social. We need to rein him in."

Kelly Travis, 46, a homemaker, said of her votes: "I kind of mixed it up. I don't like it when they talk about growing government. I guess I did want to send a signal."

In Bayville, N.J., retiree John Powers voted Republican because he thought Democrats rammed through Mr. Obama's health care law even when it was clear, at least to him, that most people did not want it. "I've never felt as much despair as I do now," Powers said. "I think we are at the lowest point in our country we have ever been at."

Boehner promised Monday to hold weekly votes to cut federal spending, make jobs the top GOP priority and fight to repeal the health law. Former President Bill Clinton, campaigning for Democrats as if his own future were on the line, stumped late into the night in New York, Pennsylvania, West Virginia, Kentucky and Florida.

Voter mobilization efforts have been unfolding for weeks as more than 14 million Americans cast early ballots.

In Nevada, home of the hot Senate contest between Democratic Majority Leader Harry Reid and tea-party pick Sharron Angle, registered Democrats and Republicans came out early in similar numbers. In Pennsylvania, another battleground, more than half the early voters were Republican, by the latest count.

Some races could go days or more without a winner, thanks to the multitude of expected close contests - in Colorado, Nevada, Illinois, West Virginia, Ohio, Alaska and more - and the persistence of shaky voting systems in some places a decade after the presidential-election counting disaster in Florida.

Hundreds of lawyers from both sides are ready to roll. This was a campaign marked by the ragged anger of partisans and caustic ads by candidates, now spilling into an Election Day that's likely to lead to complaints of voting irregularities, fraud or machine meltdowns - and hair-trigger legal challenges.

Here's a snapshot of what's at stake in the election:

On Election Day, 37 Senate seats are up for election, 19 held by Democrats and 18 by Republicans. Fourteen of these seats are open - six Democratic and eight Republican - meaning there is no incumbent competing in the election.

Three of the races are open because the incumbent lost his or her party nomination, either in the primary or state convention: Republican Sen. Bob Bennett of Utah; Republican Sen. Lisa Murkowski of Alaska; and Democratic Sen. Arlen Specter of Pennsylvania. Murkowski is running as a write-in candidate.

The party breakdown in the Senate is 57 Democrats, 41 Republicans and two independents who caucus with the Democrats.

The party breakdown in the House is 255 Democrats, 178 Republicans and two vacancies.

Thirty-seven state governorships are up for election. Of these 19 are held by Democrats and 18 by Republicans. Twenty-four are open - 12 Democratic and 12 Republican.

The party breakdown on governorships is 26 Democrats and 24 Republicans.

One hundred sixty ballot questions will be decided in 37 states. Of these, 42 were initiated by citizens.

One of the most well-known ballot measures is the California initiative to legalize recreational use of marijuana. Three other states will also tackle this issue to different degrees. Arizona and South Dakota will both vote on the legalization of using marijuana for medical purposes. A measure in Oregon would establish a medical marijuana supply system and allow limited sales of marijuana.

In Colorado, the ballot will include a proposed amendment that would define a person in the state's bill of rights from the beginning of "biological development," potentially laying the framework for outlawing abortion in Colorado.

Arizona, Colorado and Oklahoma have proposed amendments aimed at taking down the segment of the new federal health care law that will require people to have health insurance.