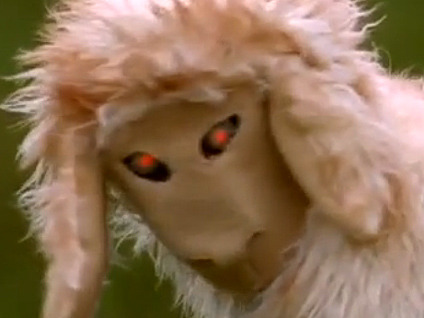 This week we will countdown to the number one ad of the 2010 midterms.

Starting us off, we travel to the California - where money was no object in this election. The number five ad comes from way back in the primaries (remember them?) courtesy of Republican Carly Fiorina. She was in a pitched primary battle against two opponents and in this viral video, attacked former Rep. Tom Campbell for being a "Fiscal Conservative in Name Only" or a FCINO.

This ad plays on the "wolf in sheep's clothing" saying to show that Campbell is a demon sheep - someone who claims to be a fiscal conservative, but in reality, is far from it. The ad made the list because it was striking, creative and got people talking. It showed Fiorina as a fighter and dented Campbell's appeal.

Ah.. Alan Grayson. One of the most outspoken members of Congress, the Democrat from the Orlando area may have done more harm than good to his re-election bid with this ad against his Republican opponent - Dan Webster.

The ad takes something Webster said, when speaking about the Bible, out of context and used it to try to say that Webster was anti-women's rights. The Bible quote is "Wives submit yourself to your own husband" and Grayson attempts to paint Webster as a religious fanatic, i.e. the Taliban.

Webster was actually recounting a story of him telling his wife not to live by that quote. Because many saw the ad as being over the top and outlandish, it backfired on Grayson and it shows the perils of pushing the envelope of political ads too far.

This ad from West Virginia Governor, Democrat Joe Manchin, shook the political landscape. It's one of the most extreme ways a Democrat has tried to distance himself from the Obama White House. Manchin literally fires back at Washington.

Shown with his hunting rifle in hand, Manchin loads up. "I'll take on Washington and this administration to get the federal government off our backs and out of our pockets" says Manchin, promising to cut federal spending and repeal bad parts of "Obamacare."

This ad worked because it grabbed voters, responded creatively to his opponent's claim that he would be a rubber stamp for Obama, and it grabbed the media's attention.

How could any mention of top ads of the election not mention this one -- with the most famous four words to start a political commercial this year: "I'm not a witch."

That statement by Republican Senate candidate Christine O'Donnell in Delaware was a direct response to the major dust-up that erupted in the campaign after comedian Bill Maher released a clip of O'Donnell on his show Politically Incorrect admitting that she'd "dabbled into witchcraft."

The fact that O'Donnell had to go on television to say that she is not a witch shows us what this race has come down to - a fringe candidate wins the Republican nomination with support from the Tea Party Express political group and is forced to defend what she used to say on the Bill Maher show.

Like many of these newly minted tea party candidates, O'Donnell has to try to explain things she's said in the past and statements made that are a bit out of the mainstream. While O'Donnell has run for office before, she's never gotten support or attention to make her run serious enough that she needed to make a statement such as this.

This ad really shows how crazy a year it has been and how some new blood in the political arena, while bringing fresh energy, comes with its own baggage.

Thank you John Hickenlooper. Thank you for this ad. The 2010 election season will be remembered, in part, for the expensive and expansive use of television ads, especially some nasty attack ads from outside groups of all stripes and sides of the political spectrum.

Early in his campaign for Colorado Governor, Hickenlooper, the mayor of Denver made a pledge to stay positive. He kicked off that push with this ad--showing his disgust for negative nasty campaign ads.

"I guess I'm not a very good politician, because I can't stand negative ads. Every time I see one, I feel like need to take a shower," he says...and he does... taking a shower numerous times in this ad, each time fully clothed.

It's a great ad, one that resonates for humor, civility and cleanliness. At the end of this campaign, it's refreshing just to write those words.

That's it for Hot Ads of the Week. Thanks for following the ad wars with us here at CBSNews.com.