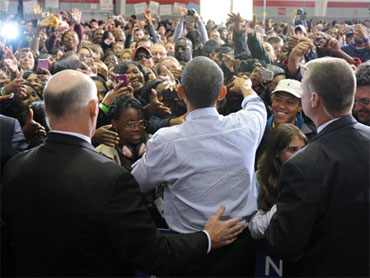 The White House said Tuesday that Mr. Obama will take reporters' questions Wednesday at 1 p.m. in the East Room.

It'll be the first chance for Mr. Obama to react to what are widely forecast to be major Democratic losses in the midterm elections, including the possible Republican capture of one or both houses of Congress.

The announcement came as Mr. Obama continued a round of radio station interviews, phoning in from the Oval Office to talk shows in Los Angeles, Chicago, Jacksonville and Las Vegas.

CBS News White House correspondent Mark Knoller says it is customary for a president to hold a news conference a day or two after midterm elections.

The fate of the Democratic Congress was put before voters Tuesday in midterm elections that drew Americans to balloting stations starting before dawn, some clamoring for change, others digging in their heels against resurgent Republicans. Expectations took hold in both camps that the political order was in for a makeover in these anxious times.

In the middle-class Cleveland suburb of Parma Heights, Ohio, Fred Peck, 48, explained his vote for Republicans - and by extension against Mr. Obama's agenda - by pointing to a 20 percent increase in his health care premiums and the declining value of his retirement fund. "I see nothing changing for the better," said Peck, who works in university campus maintenance.

In Pelham, N.Y., Raymond Garofano, 66, who works in packaging for Revlon, voted a straight Democratic ticket and allowed that Mr. Obama "is doing an adequate job. Nobody's perfect."