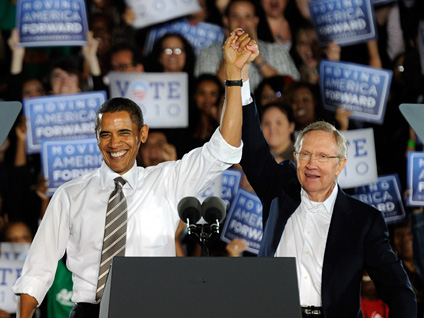 Get your last bits of election speculation and guessing out now--because starting Tuesday night we will have actual facts. People will vote. Candidates will win. Careers will end. Power in Washington will shift. There are 435 elections in the House, 37 in the Senate, and 37 gubernatorial elections. To help you sift through the returns, here's a reader and viewer's guide to some key things to watch.

The official unemployment rate is 9.6 percent, though the true picture may be closer to 17 percent. In states with key races, the unemployment rate is worse: In Nevada it's 14.4 percent; in Ohio it's 10 percent. President Obama's approval rating is about 45 percent. The generic ballot shows voters picking Republicans over Democrats by seven points. The congressional approval rating is below 20 percent.

There are nearly 100 contested House races to watch. (Follow them all on the spreadsheet I created that tracks votes, the partisan makeup of their district, and Tea Party support.) All but five represent possible Republican pickup opportunities. Each one is interesting, and those of you who want to talk through all of them can stay after class. Here, though, are a few pairs of races to watch to get a sense of whether this will be a big night for the GOP or a gargantuan night.

If you are a Democrat you can light a little candle for the few Republican seats that your party might pick up. For every one that the Democrats win, the Republican pick up needs to be one seat greater. They might be the difference between Republicans needing 39 seats and 44 seats. The districts to watch are Delaware's at-large, Florida's 25th, Hawaii's 1st, Illinois 10th, Louisiana's 2nd and California's 3rd and Washington's 8th.

To review: Republicans have to take 10 Senate seats from Democrats to gain control of the Senate. Three are pretty much gone: Indiana, North Dakota, and Arkansas. Wisconsin looks good for Republicans. Of the six remaining, almost all are toss-ups. This means it could be a very late night of vote counting. If Democrats win the early-poll-closing states of Pennsylvania and West Virginia, the GOP will have to run the table the rest of the night--including California, which looks tough going into Election Day. Here's a quick rundown of places to watch to see how the night is going.

On big national election nights, governors don't get the love they should. Yet there are two important reasons to pay attention: redistricting and battleground positioning. Governors play an important role in the once-a-decade process of redrawing congressional districts. The party in control of the governor's mansion and the legislature can draw those districts in a way that helps members of their party get elected. In Texas, the last time this happened, the Republicans who ran the show took six congressional seats away from Democrats.

The key states to watch with big redistricting implications are:

In both Michigan and Wisconsin, the GOP candidate is favored for governor. Democrats have to hope that the Michigan House stays in their party and that in Wisconsin they hold on to narrow majorities in the House or Senate.

The other reason to pay attention to governor's races is that many of them are in key presidential battleground states. Strategists believe that a candidate has an easier time in a state if he or she can take advantage of the organization of the top elected official there. Eight key battleground states totaling 112 electoral votes are up for grabs in 2010: the five above plus Nevada, New Mexico, and Iowa.

There was indeed a giant enthusiasm gap in this election: between the people who used that term repeatedly and the audience who grew sick of it quickly. Now we'll see just how much more fired up conservatives were than Democrats. The key figure to watch going into the election was the difference between registered voters and likely voters. In the last Gallup poll, Democrats were down among both: Republicans led among registered voters 48 percent to 44 percent and among likely voters by a whopping 15 points, 55 percent to 40 percent. It was, said Gallup, "a lead large enough to suggest that regardless of turnout, the Republicans will win more than the 40 seats needed to give them the majority in the U.S. House."

So the question of the evening Tuesday is not whether Democrats can match Republicans everywhere. They can't. The question is whether, when Democrats put on their full effort in the specific places, they were able to build a wall against Republican advances. Specific toss-up districts to watch to see if all the effort paid off: Ohio's 1st, Ohio's 15th, Wisconsin's 7th, Nevada's 3rd, and New York's 1st.

A number of Democrats tried to keep their distance from President Obama this year. Gubernatorial candidate Alex Sink didn't want him to come back to Florida. In West Virginia, Joe Manchin--the governor and a candidate for Senate -- refused to endorse Obama's re-election. In Indiana's 2nd District, Rep. Joe Donnelly ran an ad touting his conservative stance on immigration over pictures of Obama and Pelosi. "That may not be what the Washington crowd wants, but I don't work for them," Donnelly says. "I work for you." Rep. Gene Taylor in Mississippi's 4th District said he didn't vote for Obama. (And all this is to say nothing of the Democratic voters who are distancing themselves from Obama. A recent AP poll showed 47 percent want him to have a primary challenge.)

Other candidates under threat did embrace Obama. Rep. Tom Perriello of Virginia called for the firing of Obama's economic advisers earlier this year, but he welcomed the president's visit at the end of the campaign. Sen. Barbara Boxer appeared with Obama at a late rally in California and put him in her final ad. Incumbent Democratic Gov. Ted Strickland of Ohio campaigned with Obama several times, including just a few days before the election.

Which group of candidates--those who invited the president in, or those who kept their distance--fares better on Election Day is another theme worth watching.

Which "old bulls" will go down?

During the final pre-election excitement, when the projection for Republican gains appeared to grow by an order of magnitude every day, there was talk about 26-term veteran John Dingell being under threat of losing his seat. If the longest-serving member in House history loses, it will be a gargantuan night for the GOP. Most election prognosticators don't believe that will happen. But that doesn't mean there won't be losses among members who have been in the House for a long time. Places to look for possible career-enders: 18-term Rep. James Oberstar of Minnesota, 17-term Rep. Ike Skelton of Missouri, 14-term Rep. Rick Boucher of Virginia, 15-term Rep. Barney Frank of Massachusetts, 14-term Rep. John Spratt of South Carolina, and 13-term Rep. Paul Kanjorski of Pennsylvania.

Someone is going to make history

No matter what happens tonight it will be historic. Here are some bits of history that are likely to be undone:

Does unlimited campaign spending help the economy?
Whom will Democrats blame for their midterm defeats?
Tomorrow's spin today: Three ways the Democrats can lose, and how they'll explain it.