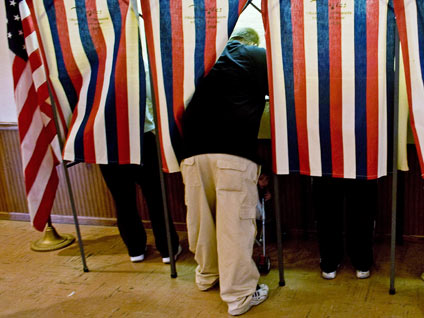 The Department of Justice has announced that it is deploying "more than 400 federal observers and department personnel to 30 jurisdictions in 18 states" from its Civil Rights Division to monitor polls on Election Day tomorrow.

It is the responsibility of state and local governments to administer elections, but the Civil Rights Division is empowered to make sure that Americans have equal access to ballots.

According to a Justice Department release, the poll monitors will, among other tasks, "gather information on whether voters are subject to different voting qualifications or procedures on the basis of race, color, or membership in a language minority group." The Civil Rights Division has also set up a phone number and web portal to allow people to complain of voter intimidation or coercion.

A representative for the Department of Justice told Hotsheet that she could not get into specifics about why certain jurisdictions were chosen. But the decision comes against a backdrop of warnings from both sides of the aisle of expected electoral fraud.

Tea Party groups around the country are sending citizen election observersto polls in what they say is an effort to ensure every vote is counted amid concerns on the right that groups like ACORN have in the past been engaged in electoral fraud. Democrats have cast such efforts as an attempt to suppress Democratic votes.

Jackson Lee's district is in Harris County, one of the jurisdictions that the Justice Department plans to monitor.

Also on the list is Cuyahoga County, Ohio, whose Board of Elections recently settled a lawsuit with the Justice Department over equal access for Spanish-speaking voters, and Maricopa County, Arizona, where controversial Sheriff Joe Arpaio faces a Justice Department lawsuit.