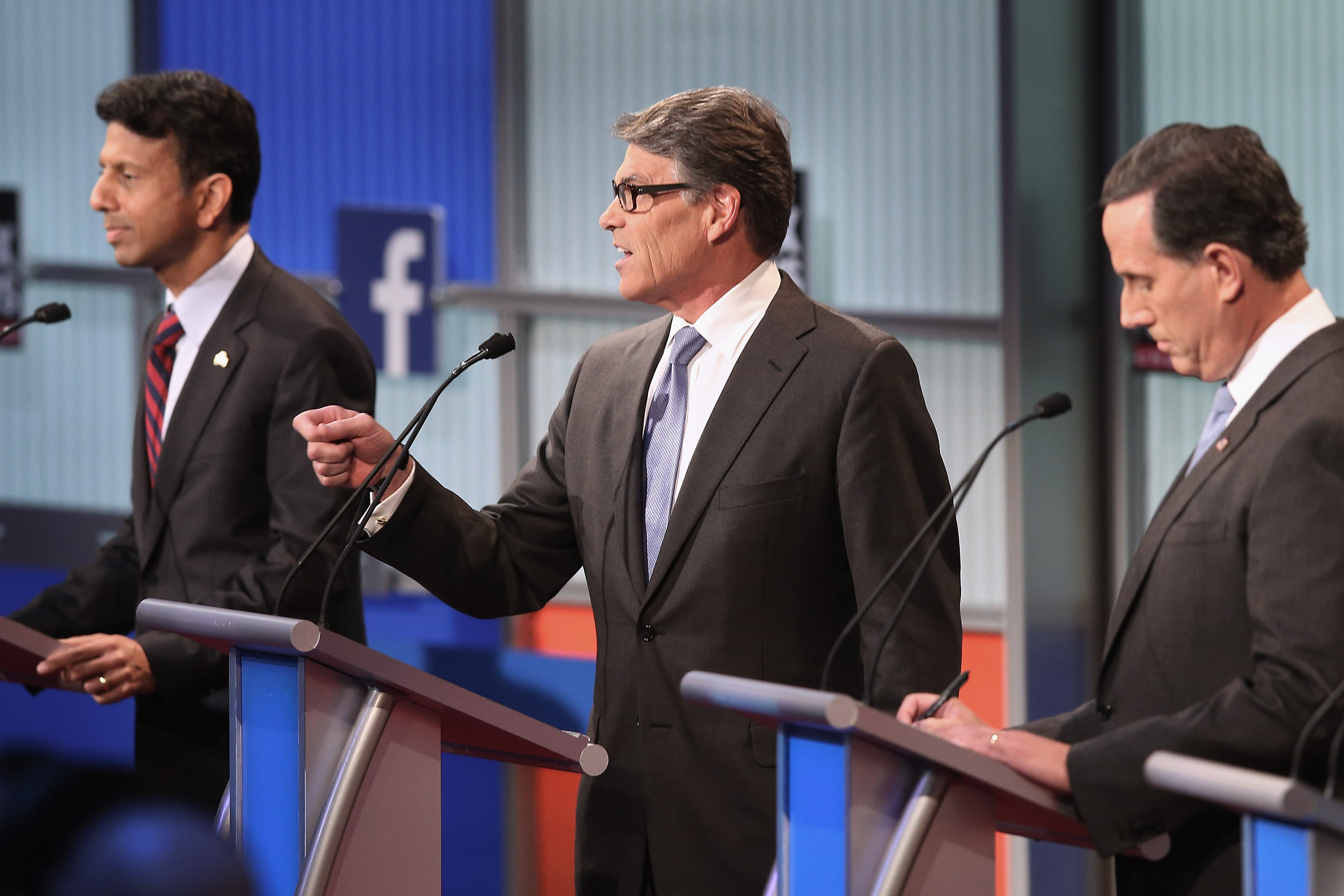 Republican front-runner Donald Trump won't be on the debate stage until 9 p.m., but that didn't stop former Texas Gov. Rick Perry and businesswoman Carly Fiorina from attacking him early on in the debate for the lower-tier GOP candidates.

Both Perry and Fiorina were asked by the Fox News moderators if Trump - who is the undisputed leader in the GOP field at the moment - was getting the better of them.

"Maybe it's because I hadn't given money to the foundation or donated to his wife's senate campaign," Fiorina said.

She added, "Since he has changed his mind on amnesty, on healthcare and on abortion, I would ask, what are the principles by which he will govern?"

As for Perry, he compared Trump's candidacy to that of former New York Mayor Rudy Giuliani, who led polls for months during the 2008 presidential campaign before flaming out early in the race. And he also questioned Trump's rationale for running for the GOP nomination.

"I talked about Donald Trump from the standpoint of being an individual who was using his celebrity rather than his conservatism," Perry said. "How can you run for the Republican nomination and be for single payer health care?"

Perry here seemed to be referring to something Trump wrote in his 2000 book, "The America We Deserve." Here's what he had to say about health care then:

"I'm a conservative on most issues but a liberal on health. It is an unacceptable but accurate fact that the number of uninsured Americans has risen to 42 million. Working out detailed plans will take time. But the goal should be clear: Our people are our greatest asset. We must take care of our own. We must have universal healthcare."

Trump went on to write that the long-term goal should be "to find an equivalent of the single-payer plan that is affordable, well-administered, and provides freedom of choice."

But then, he went on to point to the Federal Employees Health Benefits program as a guide for health care reform. He liked that "it is also very much market-based. It allows 620 private insurance companies to compete for this market. Once a year participants can choose from plans which vary in benefits and costs."

So, in other words, it sounds a little like Obamacare.

After the initial attacks on Trump, the businessman faded into the background as candidates talked about immigration, the Islamic State of Iraq and Syria (ISIS) and the recent controversy surrounding Planned Parenthood. Surprisingly, the Democratic candidate was hardly a factor in the debate - until moderators invited each participant to offer a two-word description of Clinton, recalling then-Sen. Barack Obama's description of her as "likeable enough" during a 2008 Democratic primary debate.

Here's what they had to say (clearly some of the candidates struggled to follow the instructions):

The only other extended attacks on Clinton came from Graham, who warned earlier in the night that, "To all the Americans who want a better life, don't vote for Hillary Clinton. You're not gonna get it."

Fiorina also used her closing statement to say, "Hillary Clinton lies about Benghazi, lies about her emails, is still defending Planned Parenthood, and is still her party's frontrunner." In an allusion to the verbal slip-ups from another GOP candidate, former Florida Gov. Jeb Bush, Fiorina added, "We need a nominee who will throw every punch, not stumble before he even gets in the ring."

The candidates otherwise avoided taking shots at the group who made it into the main debate, which will air at 9 p.m. Even when Jindal was asked whether another candidate, former Ohio Gov. John Kasich, made a mistake by expanding Medicaid in his state as part of Obamacare, he merely said when pressed, "I don't think anybody should be expanding Medicaid."