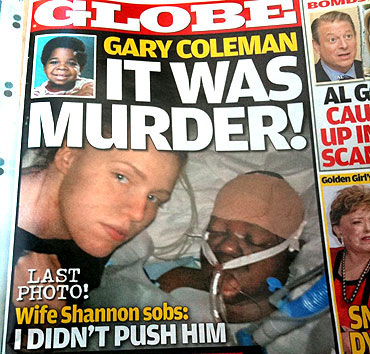 NEW YORK (CBS) A shocking deathbed photo of late former child star Gary Coleman taken just hours before his death was released Wednesday on the cover of Globe Magazine, with the actor's ex-wife, Shannon Price, posing by his side.

Dion Mial, the executor of Coleman's will, accused Price, 24, of selling the morbid image to Globe, who put it on their cover with the headline: "IT WAS MURDER."

Globe's parent company American Media confirmed it purchased the picture, however, spokesperson Samantha Trenk would not disclose the price paid or who sold the photo, according to CNN.com.

A Utah judge appointed Dion Mial, Coleman's longtime friend and former manager, as special administrator of the late actor's estate while the will goes through the probate process, CNN also reports. A will signed in 1999 named Mial as executor.

Mial was not able to stop Globe Magazine from publishing the deathbed image, which he accused Price of peddling to tabloids in an "ongoing desperate attempt" to profit from his death, the website states.

A statement issued by Price's press rep Monday did not deny Mial's accusation, but did say she needed money because she had helped Mial pay for a lawyer.

Although Coleman and Price were legally divorced at the time of his death, it was confirmed by Utah Valley Regional Medical Center that Price was granted legal rights by the actor to make medical decisions on his behalf.

Mira Sorvino reflects on her career