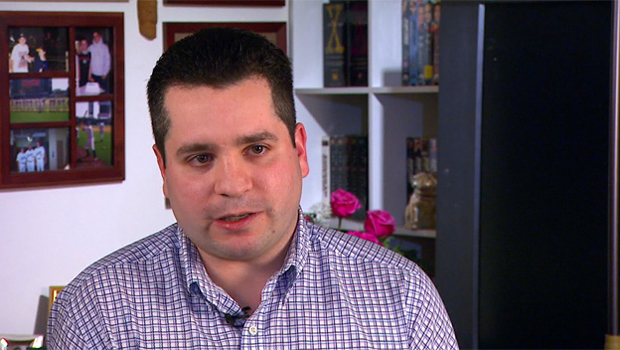 NEW YORK -- Gilberto Valle was dubbed the "Cannibal Cop:" an NYPD officer accused of planning to abduct, kill and cook a list of women, including his wife.

But his conviction was overturned, and this past December, a federal appeals court upheld the acquittal, making him a free man.

Valle, now 31, is speaking out to CBS New York station WCBS-TV about what happened and where he goes from here.

Media around the world had a field day with the headlines. So when did it all start?

But now, the world knows his darkest secret. In 2012, Valle, an NYPD officer at the time and married father, was accused of plotting to kidnap, torture and cook at least 100 women, including his wife.

She was the one who tipped off authorities after she put spyware on the computer.

"She saw me staying up late on the computer, and I, like, saw some of the paperwork that she filled out for the FBI. She thought I was having an affair, which I never did," Valle said. "She didn't expect it."

In reality, Valle had been spending his nights in fetish chat rooms, engaging in gory back-and-forths and writing things like, "letting her bleed out then butcher her while she hangs."

"They have a picture of a beautiful woman laid out on a platter that I found attractive, but as far as actually cutting her up, you know, none of that stuff ever, the blood stuff never appealed to me," Valle told WCBS-TV.

"I'd send a bunch of pictures to someone I was role-playing with, and they would pick which one they thought was the prettiest, so that person happened to pick my wife. It wasn't like I was shopping her out or that I intended to do any harm to her," he said.

"I'm not so much into the whole cannibal part per se. It's more about, like, the bondage stuff," Valle said.

However, Valle had mentioned things online about oven sizes, cutting people up and preparing them for consumption. So if he is not into cannibalism, what is the explanation for those comments?

"I had created this role where I was the cannibal guy. 'The chef' was my username, whatever it was," Valle said. "As time went on, you know, more and more people wanted to do these role plays with me because I was really good. I kind of wanted to provide and be a little more graphic and kind of not disappoint - again, the competitive side of me came out."

The former cop said that he is the least violent person you'll ever meet. He told WCBS that his online searches for methods of abduction were meant to "add realism to the stories" while role-playing and that he never intended to hurt anyone.

But in March 2013, he was convicted of kidnapping conspiracy. He spent 21 months in prison.

Valle had a job in the kitchen, which many can see the irony in.

"That was the only job available, so I didn't have a choice there, but I am a good cook, so people need to get over that," he said.

When asked if he would go back to visiting websites dedicated to the dark fantasies, Valle said, "I don't know. I can't answer that. I'm not interested in it right now, but if I wanted to, it's not illegal."

Valle was vindicated in the courts, but in the court of public opinion, he knows everyone has their own verdict.

"I wish I wasn't known this way. I wish I never went through this. I wish I still had my wife and daughter with me. I wish I was still a police officer. I miss that stuff every day," Valle said.

Valle's wife divorced him, and he hasn't seen his daughter since his arrest. She is now 4.

Since being cleared, Valle's focus is trying to get visitation rights. He is in therapy, had a girlfriend for a few months and is working in another field.

Inspired by his lawyer, Valle took the LSATs and is debating a career in law or even trying to get reinstated in the NYPD. He could sue to do so.