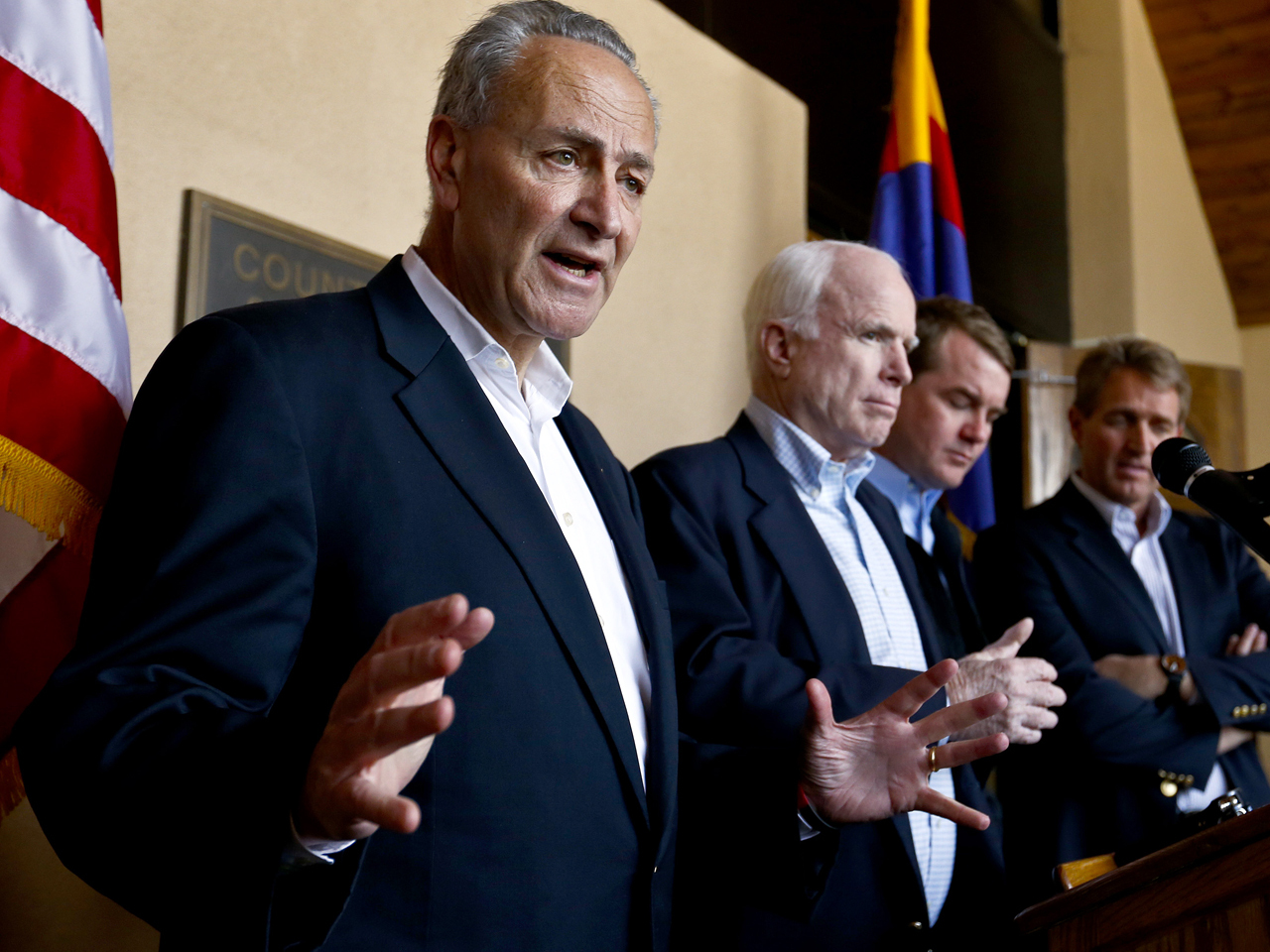 A bipartisan group of senators appears to be inching ever closer to a deal for overhauling the nation's immigration system, and having made recent progress on one of the issue's key sticking points, negotiators say they expect to present a version of the legislation by the end of this week.

The so-called "gang of eight," which has for months been involved in negotiations for a comprehensive immigration reform bill, is expected to announce committee hearings next week to debate the bill, and senators from both sides of the aisle will be briefing their caucuses today as to the ins and outs of the plans.

And while the process is not complete, one of the major sticking points appears to be headed toward resolution.

According to a spokesperson for Sen. Dianne Feinstein, D-Calif., a tentative agreement has been reached between Feinstein, Sen. Marco Rubio, R-Fla., Sen. Michael Bennet, D-Colo., and Sen. Orrin Hatch, R-Utah, for a deal between farm workers and the agriculture industry over worker wages and the number of visas provided to bring agriculture workers into the country.

"We are optimistic that we will be able to introduce legislation soon," a Senate aide told CBS News. "Chairman Leahy has agreed to hold a hearing as soon as possible after the legislation is introduced, and has promised to have unlimited debate and amendments during the committee mark-up. Assuming Republican members push for as much time as possible, the committee debate will last through the next recess, giving plenty of time for public debate and review."

The news of an impending deal comes just hours before thousands of immigration advocates are set to rally at the Capitol, reiterating their calls for increased rights -- namely including a pathway to citizenship for undocumented immigrants -- among a chorus of civil rights activists and leaders.

Since last year's election, when Latino voters overwhelmingly voted for Democratic candidates, Republicans have expressed a renewed interest in passing meaningful immigration reform, and an issue that once faced enormous hurdles has become top issue for Democrats and Republicans alike.

Despite the strong incentives for both sides to reach a deal, Rubio -- a primary leader on the GOP side of the negotiations -- expressed hesitation recently that the process was moving too quickly. Now, with assurances that the judiciary committee will have ample time to review and discuss the legislation, his concerns appear to have largely abated.

"Senator Rubio has said from the outset that we will not rush this process, and that begins at the committee level," said Rubio aide Alex Conant. "The Judiciary Committee must have plenty of time to debate and improve the bipartisan group's proposal, so it's good that senators and the public will have weeks to study this proposal before the Judiciary committee will mark it up. Senator Rubio will be requesting that his Senate colleagues arrange multiple public hearings on the immigration bill. We believe that the more public scrutiny this legislation receives, the better it will become."

Tuesday, even Sen. Minority Leader MItch McConnell, R-Ky., a dogged partisan, expressed what appeared to be a sense of moderate optimism.

"About all I can say about immigration at this point is that I think there is a bipartisan interest in moving the issue forward," he said. "We'll have to see what it looks like when we get it."

Despite its anticipated Senate passage, any immigration bill will face yet more hurdles in the GOP-led House of Representatives.

But "gang of eight" member Sen. Jeff Flake, R-Ariz., argued that Republicans -- and House Speaker John Boehner, R-Ohio -- will have a hard time ignoring a bill that has widespread bipartisan senate support.

"When the Senate passes something with 65 or 70 votes it's hard to ignore or put aside," he said.

He added, too, immigration is an issue Republicans want to have "in the rearview mirror."

"Nothing focuses the mind like a bad election," he said, of the importance of making up ground with Latino voters. "When people see a party that is not rational, they're not going to go with that party."