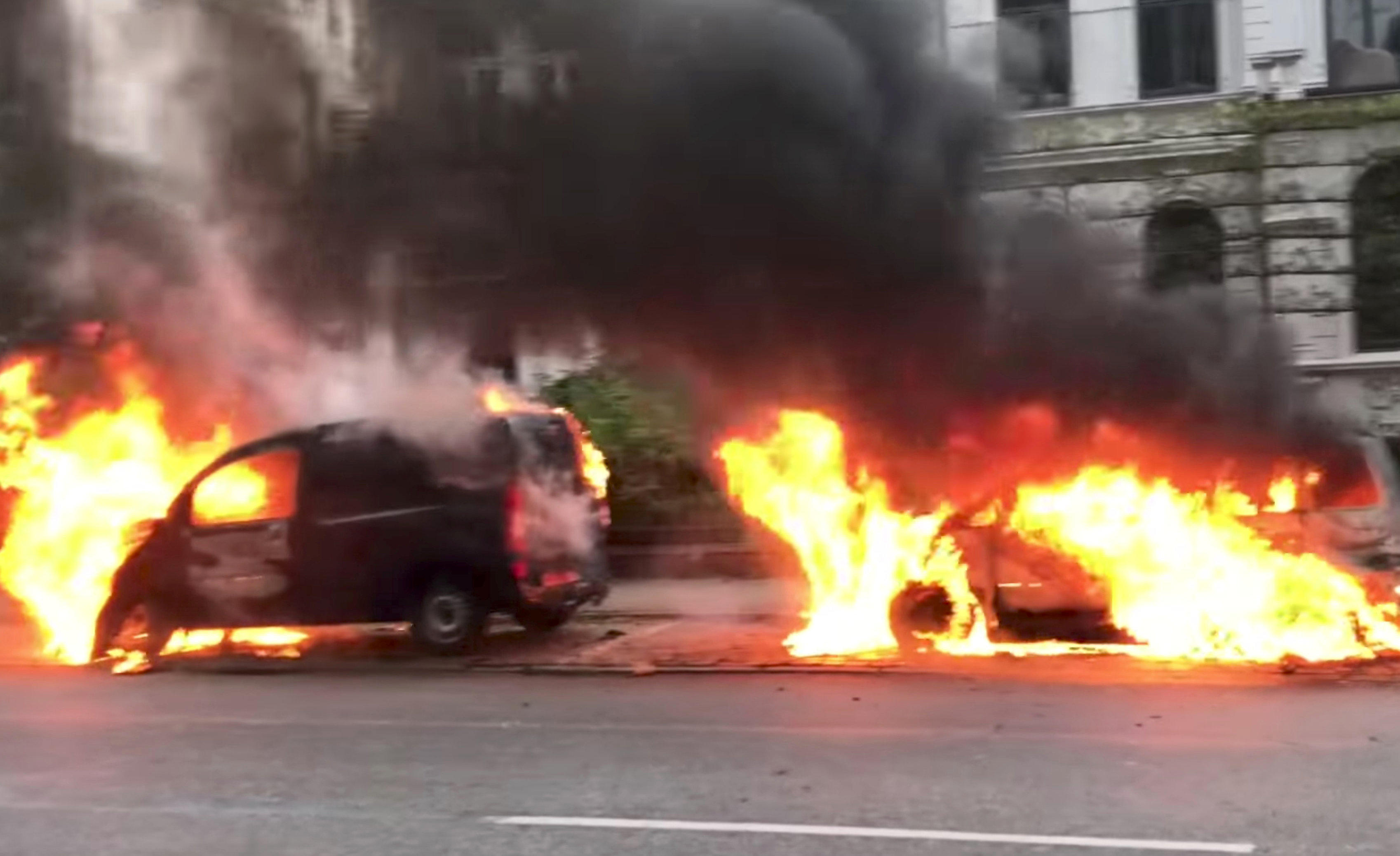 Responding to a second day of protests, police ordered in more than 900 additional officers from across the country to get the clashes under control. Over 160 police officers were injured, dozens of activists had to be taken to the hospital and more than 70 protesters were detained.

"I have every understanding for peaceful demonstrations," Merkel said. "But violent demonstrations endanger human lives, they endanger people themselves, they put police officers and security forces in danger, put residents in danger, and so that is unacceptable."

"These protests are against the violence of the G-20," Lickurr told Brennan. "We believe that there is no hope coming from the G-20. We want the American people to know that Donald Trump has no friends here and that when Donald Trump comes to Germany for his first visit to Germany there will be a massive opposition."

Merkel thanked security forces for their work as the Group of 20 met behind a heavy police presence in a no-go zone that was off-limits to most.

Thousands of officers in full riot gear patrolled as many as 30 different protest marches. Most of the demonstrations were peaceful and creative, but some rioters threw gasoline bombs, iron rods and cobblestones through the city.

More than 20,000 officers were on hand to guard the city's streets, skies and waterways.

Police trucks blasted protesters back with water cannons, and officers physically dragged away a group holding a sit-in at the entrance to the summit grounds after they jeered and yelled at a convoy heading inside.

Anti-globalization protesters also kept U.S. first lady Melania Trump from joining the spouses of the other world leaders at the summit.

Violence seemed to be escalating on Friday evening as anti-globalization activists forced their way into a closed train station by bending open the iron gates. Police responded by deploying a water cannon outside the Landungsbruecke station.

Protesters repeatedly tried pushing into the no-go zone - among them a group of 22 swimmers from Greenpeace who tried accessing the area from the Elbe River but didn't succeed, police said.

Later on Friday, activists also attempted to get near Hamburg's highly protected philharmonic hall, where international leaders were set to listen to a concert and have dinner together. Greenpeace boats blasted music toward the performance hall to disrupt the leaders' meeting there.

Police condemned the "shocking criminal energy and high potential of violence" on display and tweeted a photograph of an officer with a bloody wound they said was caused by slingshot catapults.

While most of the at least 160 injured officers were hurt only slightly, some had to be taken to the hospital, including an officer whose eye was injured when a firework went off in front of him.

The city's fire department said 11 activists were severely injured and taken to the hospital after falling off a 13-foot-tall wall after fleeing from a confrontation with riot police.

Police could not say how many activists were injured in the clashes, but the fire department said that as of Friday morning they had taken 60 protesters to hospitals across the city.

Kathleen Mueller, a 56-year-old protester from Potsdam near Berlin, criticized police for what she said were "brutal responses" to overwhelmingly peaceful demonstrations.

Mueller said she'd come to Hamburg to stop rampant consumerism and to tell leaders that "we need to ... rethink our economic systems." She said she saw riot police wrenching apart a peaceful human chain and dragging people off.

"They didn't have to do that, there was no resistance, it was just to cause pain and it shouldn't happen," said Mueller, who was participating in a protest of some 300 people in a park near the summit grounds.

Hamburg resident Kursat Bayazit, 42, expressed frustrations with both the summit and the demonstrations keeping him from getting to his work as a landscaper.

"Yesterday, there were big problems," Bayazit said while taking a stroll with his 2-year-old daughter in the St. Pauli neighborhood that had seen heavy clashes Thursday night.

He pointed across the street to a large, burned-out garbage can with an empty fire extinguisher lying nearby and the pungent smell of smoke still in the air.

"They burned that garbage can and in other places cars, it really scared my daughter," Bayazit said.

However, not all St. Pauli residents seemed to share Bayazit's frustration regarding the chaos overtaking Hamburg during the G-20 summit.

Few had their stores and homes boarded up and some residents seemed to welcome the protesters. Three young men wearing anti-summit T-shirts listened to reggae music on their balcony.

A few buildings away, bannners hung from a window saying, "Granny and grandpa are against G-20" and "G-20 - go get beer." Some bars had put up signs saying, "protesters welcome."

Sex workers on the city's famous Reeperbahn amusement strip could be seen dancing to the music of the activists on Thursday night and giving a thumbs-up to those passing by.