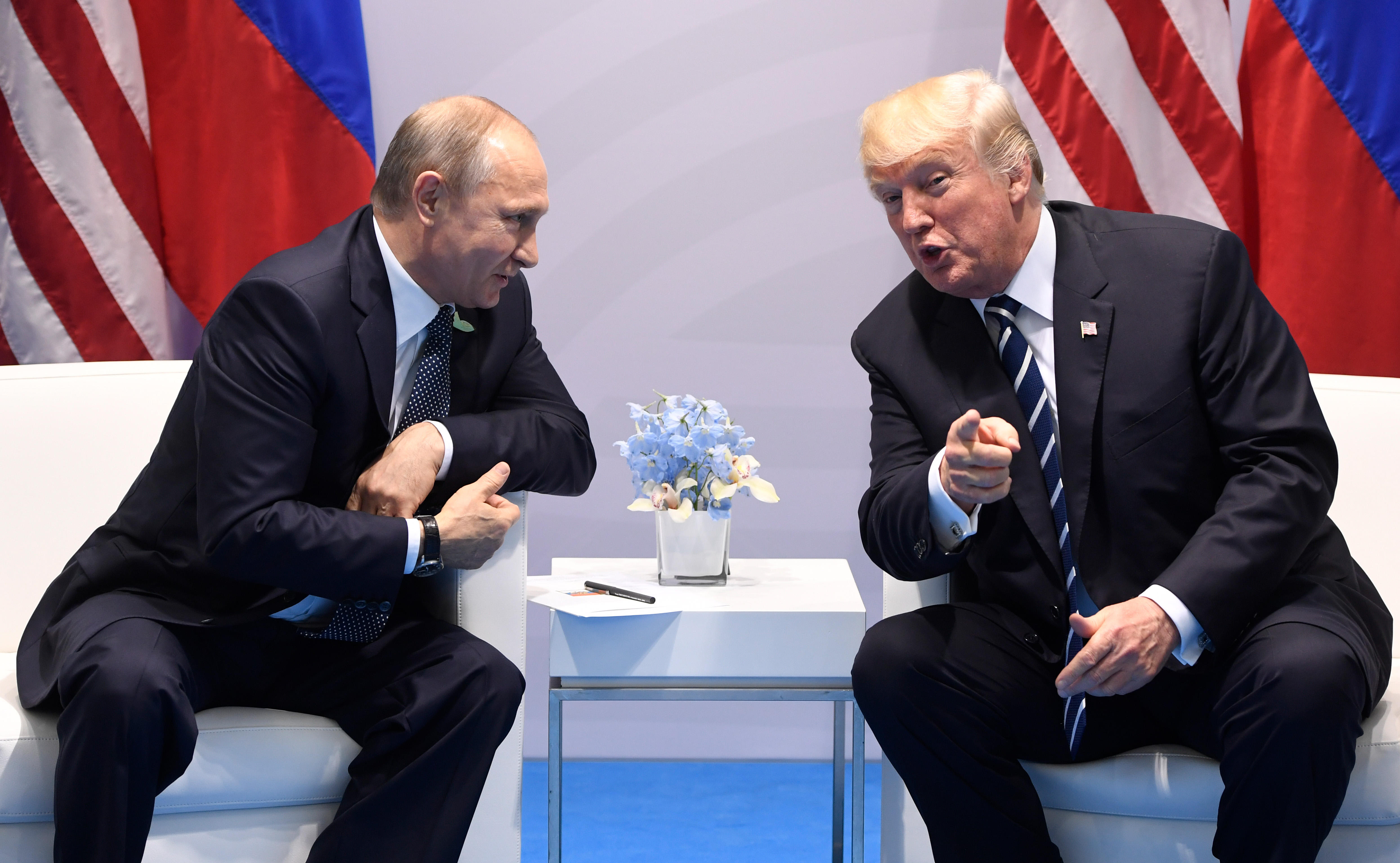 HAMBURG, Germany -- President Donald Trump and Russian President Vladimir Putin's meeting appeared to be off to a cordial start, as Mr. Trump shook hands twice briefly with Putin and told reporters the two had been "discussing various things," and "I think it's going very well."

"[W]e look forward to a lot of very positive things happening for Russia and the United States and for everybody concerned," the president said, and then addressed Putin, by saying, "And it's an honor to be with you."

Putin noted the two have spoken on the phone several times on "very important bilateral issues," but he added that phone conversations are never enough, and he pronounced himself delighted to be able to meet Mr. Trump in person.

The meeting between the two had been scheduled for 35 minutes. Instead, it went on for over two hours.

German authorities tried to prevent protesters from disrupting the G20 summit as it got underway Friday in Hamburg. But the tension outside, as cars were torched and protesters faced-off with water cannon-wielding police, may not rival the atmosphere inside, as President Trump prepared to meet Putin for the first time.

Mr. Trump's meeting with Putin had no set agenda, reported CBS News' Major Garrett, and the White House has said nothing about any plan for the president to protest the Russian election meddling during the encounter.

The two men's first, brief encounter came several hours before the sit-down meeting, as they mingled with other word leaders at a reception. They shook hands, but it wasn't clear if they exchanged anything more than pleasantries.

Mr. Trump and Putin were joined by U.S. Secretary of State Rex Tillerson and Russian Foreign Minister Sergey Lavrov. Tillerson has far more experience than his own boss in dealing with Putin, having negotiated regularly with the Russian leader and top Russian ministers as CEO of Exxon-Mobil.

The leaders were expected to delve into a series of vexing foreign policy issues, including the conflict in Syria and Russia's provocations in Ukraine. But much of the focus -- both in Washington and Moscow -- was on whether Mr. Trump would broach the issue of Russia's meddling in the election.

Before the meeting Friday, Mr. Trump tweeted that he was looking forward to the visit, saying there was "much to discuss." During a news conference in Poland on Thursday, he again refused to accept the conclusion by multiple U.S. intelligence agencies that Russia alone interfered to try to help Mr. Trump win last November. He said it could have been Russia, but that other countries could have meddled, too.

"Nobody really knows for sure," Mr. Trump said. He also renewed an accusation against his predecessor President Barack Obama, claiming he failed to act against Russia over the hacking after he learned of it in August 2016, "because he thought Hillary Clinton was going to win the election."

On Friday, Mr. Trump tweeted that "everyone" in Hamburg was talking about the Democrats' response to Russian election hacking.

"Everyone here is talking about why John Podesta refused to give the DNC server to the FBI and the CIA. Disgraceful!" Mr. Trump said in his tweet.

Podesta is the former chair of Hillary Clinton's presidential campaign. He did not run the Democratic National Committee.

U.S. intelligence agencies have blamed the hacking of the DNC, as well as Podesta's personal email account, on the Russian government.

U.S. lawmakers and federal investigators continue to look into Russia's election interference, along with possible collusion between Trump campaign associates and Russian government officials. That puts President Trump under intense scrutiny over how he handles the sit-down with Putin, a former Russian intelligence agent known to come to meetings like this well-prepared.

Mr. Trump, who likes to have neatly packaged achievements to pair with high-profile meetings, may have sought some concessions from Russia to show he's delivering progress and helping restore a once-productive relationship that he recently described as being at an "all-time low." Putin would almost certainly want something in return.

The list of issues ranges from Syria to Iran to Ukraine, and now North Korea, following Pyongyang's test this week of a missile capable of striking the U.S.

Russia wants the U.S. to return the two compounds in New York and Maryland that were seized by the Obama administration as punishment for election meddling. It also wants the U.S. to ease sanctions it imposed on Russia after Putin annexed the Crimean Peninsula, and over Russia's support of separatist elements in Ukraine.

The U.S. wants a resumption of adoptions of Russian children by American parents, which Russia banned in 2012, along with an end to what it claims is intensifying harassment of U.S. diplomats and other officials stationed in Russia.

Lawmakers in both political parties say Mr. Trump must confront Putin over the election.

Several senior Democratic U.S. senators served notice Thursday that Mr. Trump would be in "severe dereliction" of his presidential duty if he fails to confront Putin over the issue, telling the president in a letter that he must make clear that Russia's interference in U.S. democracy will not be tolerated.

"The upcoming elections cannot be a playground for President Putin," said Minority Leader Chuck Schumer of New York; Dick Durbin of Illinois, the Senate's No. 2 Democrat; and the top Democrats on the Intelligence, Armed Services, and Foreign Relations committees.

Rep. Adam Kinzinger, R-Ill., a member of the House Foreign Affairs Committee, said this week that he would "raise holy hell" if Mr. Trump goes soft on Putin. "It is very important for us to make a statement that Russia does not meddle not just in our elections, here and the future, but in our allies,'" he said.

Outside the summit on the streets of Hamburg, CBS News correspondent Margaret Brennan reports that police in riot gear forcibly removed several demonstrators staging a sit-in, trying to block the arrival of world leaders.

Later Friday morning, First Lady Melania Trump was forced to skip a planned event for leaders' spouses -- a talk on climate change organized by Merkel's husband -- due to the protesters blocking her exit from her hotel.

Prior to his meeting with Putin, Mr. Trump met with Mexican President Enrique Pena Nieto.

Pena Nieto had been scheduled to visit the White House shortly after Mr. Trump took office, but he scrapped the trip at the last minute due to disagreement with President Trump over his insistence that Mexico pay for the wall he has vowed to build along the U.S.-Mexico border to deter illegal immigration. Pena Nieto insists Mexico will not pay.

Mr. Trump has vowed to tighten border security and crack down on undocumented workers and drug cartels, but he has been less firm on getting Mexico to pay for the wall.

He reassured Pena Nieto in April that he would not pull out of the North American Free Trade Agreement, which involves the U.S., Mexico and Canada. But Trump said he could still withdraw if he concludes that a renegotiated pact would not produce "a fair deal" for all sides.

The Putin meeting is the highlight of a hectic, four-day European visit for Mr. Trump, who addressed thousands of Poles in an outdoor speech in Warsaw, Poland, on Thursday. He met in Germany with Chancellor Angela Merkel, the summit host, and had dinner with two Asian allies -- Japanese Prime Minister Shinzo Abe and South Korean President Moon Jae-in -- to discuss North Korea's aggression.

The Group of 20 gathering of the world's leading rich and developing nations is the first since Mr. Trump announced that the U.S. would withdraw from the Paris climate agreement, deeply disappointing Merkel and other U.S. allies who had hoped to maintain momentum in battling climate change. Even as Mr. Trump has said in vague terms he would like to renegotiate the Paris accord, European leaders have vowed to press forward.