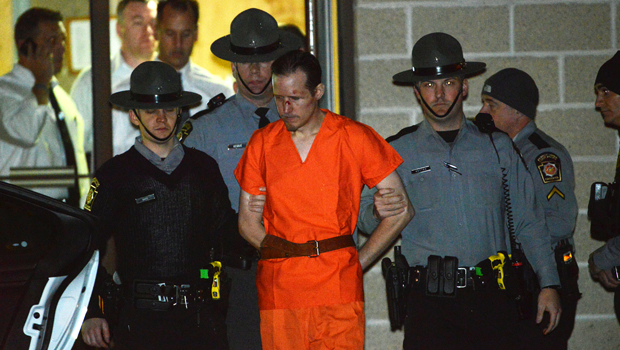 The target of an exhausting manhunt in northeastern Pennsylvania just spent his first night in jail.


"They ordered him to surrender, to get down on his knees and raise his hands, which is what he did," State Police Commissioner Frank Noonan said at a press conference Thursday night. "Once they approached him, he admitted his identity, and he was taken into custody."

On early Friday morning a handcuffed Frein was ushered into the Pike County Courthouse in Milford for his preliminary arraignment. Onlookers shouted, "Are you sorry?" and "Why did you do it?"

For 48 tense days, hundreds of law enforcement officials fanned out across the Pocono Mountains of northeastern Pennsylvania in a grueling manhunt for the 31-year-old survivalist armed with high-powered weaponry and explosives.

In the end, Frein surrendered meekly around 6 p.m. Thursday to a team of U.S. marshals who stumbled across him near an abandoned airplane hangar some 30 miles from the rural barracks where he allegedly opened fire Sept. 12, killing a trooper and seriously injuring another.

Noonan said Frein was "definitely taken by surprise" when searchers found the suspect in Tannersville, Pennsylvania, a few miles from his parents' home. "He was away from the hangar and in an open field when we apprehended him," he said.


Frein's arrest included a special salute to the trooper killed in the Sept. 12 ambush: Authorities placed him in the handcuffs of slain Cpl. Bryon Dickson and put him in Dickson's squad car for the ride back, under heavy police escort, to the Blooming Grove barracks.

State Police Lt. Col. George Bivens said Frein has spoken since his capture, but wouldn't disclose details of what he's said, or a possible motive. "I've characterized his actions in the past as pure evil, and I stand by that," Bivens said.

"One of the teams located him as part of a routine sweep of the woods they were conducting," Bevins said.

He said that Frein's capture brought "a sense of relief no one else would be injured in the course of this manhunt.

According to the State Police, the search has cost about $10 million.

Noonan, who characterized Frein as "dedicated to killing law enforcement members," said the suspect was in good physical condition following 48 days on the run: "He's not damaged at all and he did not require any medical attention -- healthier than I would have expected," he said.

After the shooting, Frein disappeared deep into the woods. He eluded multiple agencies looking for him, but left behind clues of his whereabouts including weapons, ammunition and soiled diapers.

The weapons of mass destruction charge came after investigators found a cache of items abandoned at a campsite, including two homemade IEDs.

"He has been stripped of his guns, his bombs, and now his freedom," Sam Rabadi, chief of the Philadelphia office of the Bureau of Alcohol, Tobacco, Firearms and Explosives, said at a late-night news conference.

Prosecutors say they want to see Frein convicted and then executed.

The quiet takedown of Frein, who kneeled and put his hands up when marshals approached him, ended weeks of tension and turmoil in the area, as authorities at times closed schools, canceled outdoor events and blockaded roads to pursue him. Residents grew weary of hearing helicopters whirring overhead, while small businesses suffered mounting losses and town supervisors canceled a popular Halloween parade.

"It feels good to know there's a guy like this off the streets," said Gregory Kubasek, 19, of Marshalls Creek, who drove to the barracks Thursday night to catch a glimpse of Frein.

The manhunt had disrupted some plans for trick-or-treating, but Halloween festivities in Barrett Township, in the heart of the search zone, were back on.

"We as a town think the kids have gone through enough," said Ralph Megliola, chairman of the township

Helen Blackmore, who lives in nearby Cresco, was ready for some normalcy.

"It was very crazy here. The helicopters were out all the time. Nobody was sleeping. Even today they were out," she said. "We're relieved. We're very relieved. We want things to get back to normal."

After being processed, Frein left the barracks in handcuffs around 1:30 a.m. Friday and was taken to the Pike County Correctional Facility. His nose looked swollen and he appeared slightly bloodied above one eye.

State police said they didn't know whether Frein, who was unarmed when captured, had been using the hangar as a shelter during his seven weeks on the run, and they wouldn't say what they found there.

Police said they linked Frein to the ambush after a man walking his dog discovered his partly submerged SUV three days later in a swamp a few miles from the shooting scene. Inside, investigators found shell casings matching those found at the barracks as well as Frein's driver's license, camouflage face paint, two empty rifle cases and military gear.

Officials, saying Frein was armed and extremely dangerous, had urged residents to be alert and cautious. Using dogs, thermal imaging technology and other tools, law enforcement officials combed miles of forest as they hunted for Frein, whom they called an experienced survivalist at home in the woods. At times, police ordered nearby residents to stay inside or prevented them from returning home.

Trackers found items they believe Frein hid or abandoned in the woods -- including soiled diapers, empty packs of Serbian cigarettes, an AK-47-style assault rifle and ammunition, and two pipe bombs that were functional and capable of causing significant damage.

They also discovered a journal, allegedly kept by Frein and found in a bag of trash at a hastily-abandoned campsite that offered a chilling account of the ambush and his subsequent escape into the woods. The journal's author described Dickson as falling "still and quiet" after being shot twice.

Authorities said Frein had expressed anti-law enforcement views online and to people who knew him.

Police found a U.S. Army manual called "Sniper Training and Employment" in his bedroom at his parents' house in Candensis, and his father, a retired Army major, called his son an excellent marksman who "doesn't miss," according to a police affidavit. Authorities believe Frein had been planning a confrontation with police for years, citing information they found on a computer used by him.

A man and a woman believed to be Frein's parents, reached separately by telephone on Thursday, declined to comment.

Frein is charged with first-degree murder and various other offenses, including two counts of possession of weapons of mass destruction filed after police discovered the pipe bombs.

Dickson, at his funeral, was called a devoted husband and father and "impeccable" ex-Marine who took his work seriously but also enjoyed making wooden toys for his young sons and finding humor in everyday situations.

Douglass was shot in the pelvis and critically injured in the ambush, which took place during a late-night shift change. He remained hospitalized until Oct. 16, when he was discharged to a rehabilitation facility, state police said.

Patrick Moryto, 21, of East Stroudsburg, rushed to the Blooming Grove barracks after he heard Frein had been caught, and got there in time to see him.

Frein was wearing camouflage pants and a dark hooded sweatshirt when he entered the barracks, Moryto said.