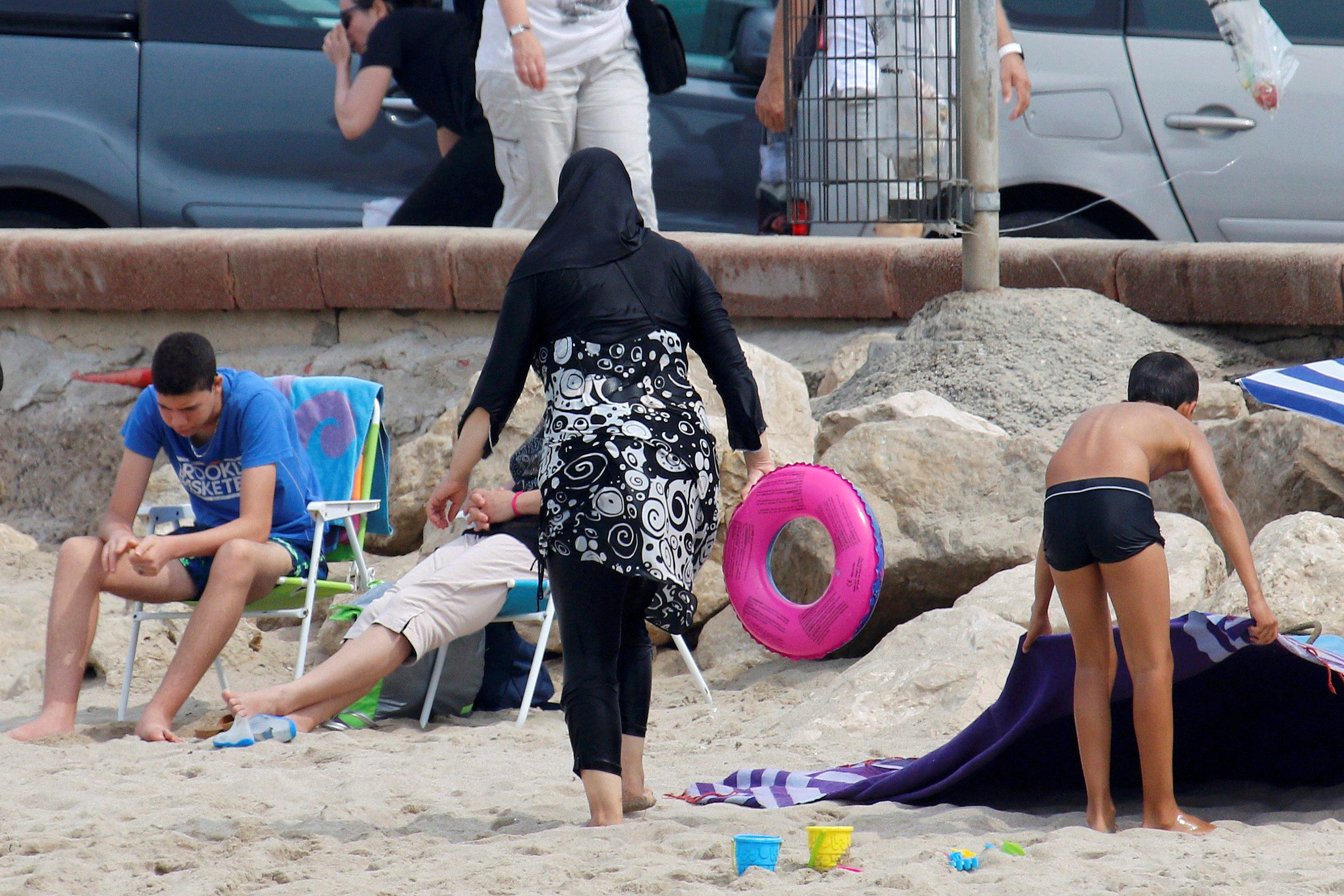 NICE, France -- As her young children played with their iPhones in a gated garden apartment in Nice, Feiza Ben Mohamed, a 30-year-old Muslim of Algerian and Moroccan descent, explained her protests against the increasingly common bans on the full-body bathing suits known as burkinis in her native France.

Born in Marseille, Ben Mohamed is vehemently against terrorism, but she believes the burkini bans won’t help prevent it and will only drive a wedge deeper through French society. A former hospitality manager, she’s become the spokeswoman for the non-profit group Fédération Des Musulmans du Sud (Federation of Southern Muslims).

She took on the role to combat what she feels is the collective blame being placed on Muslims in her country for the recent attacks against it.

“We already have this problem of Islamophobia since the attack of Charlie Hebdo, but now it’s worse and worse since, you know, here in this city, it’s very, very difficult for Muslim people to be what they are,” she told CBS News at her home.

After a terrorist with known psychiatric issues drove his truck into 400 Bastille Day revellers in Nice -- killing 86 of them – resort towns all along the French Riviera acted swiftly to ban the burkinis, calling them a threat to secularism and security. Cannes, home to the renowned film festival, was the first to enact such a ban, but a dozen French coastal cities quickly followed suit.

The bans are temporary, written only to cover the warmer months this year when the beaches are in wide use.

Authorities are enforcing the rules; this week women have been issued on-the-spot citations (about $35), given verbal warnings, and one was even forced to remove her burkini as armed police stood by and watched on a beach in Nice, drawing a massive backlash on social media.

When Ben Mohamed and her friends went to the moment of silence on the Promenade des Anglais in Nice after the July 14 truck attack to mourn friends who were killed, she was not wearing a hijab, but her friends were.

“Why are you here, to provoke us?” hounded some other attendees.

“They were watching us as if we were not in our own country, as if it was unacceptable to have Muslim people at the event, as if we were not normal citizens,” Ben Mohamed told CBS News. Later, when she went from the mosque in her hijab to the market, people spit on her.

Ben Mohamed said much of the current animosity is down to French politics; there is an election next year, and with a fast-rising far-right in the country (and elsewhere in Europe), some politicians may be feeling pressure to take a strong line on Muslim extremism.

There is fear, said Ben Mohamed, that French “Muslim politicians will start to run for office.”

The French Constitution establishes religious freedom and bans racial and ethnic discrimination. Nonetheless, many French -- including some judges -- invoke the principal of laïcité, or secularism, to justify a 2004 national law banning religious attire in schools, including Muslim headscarves, Jewish yarmulkes and Christian crucifixes.

In 2010, the niqab, or face covering of the burqa, was banned in all public places.

This week, an appeal of one locality’s burkini ban is being heard by France’s supreme court in Paris. The implications of the ruling will stretch to all the other towns with bans too.

It is a legal debate already playing out at the local level. In the Administrative Tribunal of Nice, located in an elegant courthouse in Mont Boron overlooking the Riviera, lawyers argued before three magistrates for 90 minutes on the burkini ban in the neighboring town of Villenueve-Loubet.

One of the judges, Magistrate Christophe Tukov, asked the lawyers whether the bans were really, fundamentally about secularism, or something else.

“This is just a pretext,” lawyer Patrice Spinosa told CBS News, “but it is not about Islamophobia, it is about terrorism and attacks in France.”

Ben Mohamed argues the politicians who have brought the bans are confused and have acted out of either fear or retribution rather than genuine security interests.

“When you see someone wearing hijab, it means that she is Muslim. But for the mayor of Cannes, if you are wearing a burkini, it means that you are a part of a radicalized organization,” she said.

Some observers agree the burkini bans look primarily like a way for leaders to give the appearance that they are doing something against extremism.

“It is easier to accuse them (French Muslims​) than to solve real social problems: unemployment, poverty, and social inequality,” Agnès De Féo, a sociologist and documentary filmmaker in Paris, suggested in an interview with CBS News.

“There are undoubtedly extraordinary situations in which a state or government may limit what people may wear… but a flat ban on wearing religious garb -- in this case a burkini -- is at war with the notion of personal freedom and, in particular, religious freedom,” Floyd Abrams, a prominent U.S. First Amendment lawyer, told CBS News.

Abrams, an admitted admirer of French secularism, concluded the burkini ban “will drive people who seek to wear burkini outfits to be more -- not less -- estranged from the secular state France seeks to remain.”

In an interview with CBS News at City Hall, Nice Deputy Mayor Rudy Salles made it clear that he believes most of Nice’s 12-percent Muslim population poses no threat -- but stressed the need for cultural assimilation.

“I’m working with Muslims in my office. They are people, so nice, completely French. They just have a different religion. They practice if they want to, or if they don’t want, I don’t mind, but they respect the rules of the country and are happy to live here: they are not responsible for anything, and they’re afraid.” But, he added, “I don’t say the same thing for some Muslims living here and wearing a hijab, for example. That’s very different.”

France is still reeling from several recent extremist attacks in the name of Islam. The Paris nightclub attack in November 2015, the Nice truck attack in July, and the murder of apriest at the altar​ in August in Normandy are still fresh in French minds.

Many businesses in the south of France are reeling, also, from a 30 percent decrease in tourism. Bruno Mercadal, the director-general of the Royal-Riviera Hotel in Saint-Jean-Cap-Ferrat, told CBS News that people are justifiably nervous about the ability of government security forces to prevent terrorist attacks in the region.

As the debate over the merits and wisdom of the burkini bans engulfs the country, more serious questions over the French government’s ability to detect and deter terrorist attacks remain unanswered.

Salles, like many of his fellow municipal leaders, is angry at the government in Paris.

He told CBS News he assailed French Prime Minister Manuel Valls for his claim that security on Nice’s promenade the night of the Bastille Day attack was similar to that in place on the Champs Elysee in Paris.

Contrary to published accounts, Salles insists there were no national police present where the truck entered the Nice Promenade, just municipal traffic officers. According to Salles, the Champs Elysee had four levels of security checkpoints, but not in Nice.

Other mayors and deputy mayors have argued that the national government has failed to provide enough help to local police departments, but Salles was clear that he asked for federal police on the promenade for Bastille Day, and was promised help, but it didn’t come.

“Mr. Prime Minister, you can say that to who you want but not to me because I was on the Promenade the 14th of July night. I know that you didn’t do the same, so don’t say that. Say we couldn’t prevent it because we couldn’t imagine that. We can’t understand, but don’t say we had the same security because that is not true,” Salles said of his conversation with the prime minister.

The deaf ear in Paris, Salles said, has prompted leaders like him to turn to other governments for advice. Six months ago he visited Israel to discuss terrorism.

It was advice from Prime Minister Benjamin Netanyahu and his top advisers, Salles said, that prompted him to ask Paris for national police support at the Bastille Day celebrations.

Until they feel leaders at the federal level in Paris are taking real action to detect and deter the threat of terrorism, it’s likely mayors and other officials along the French Riviera will continue to take matters into their own hands, in whatever way they feel they can. Even if those measures appear only to stoke the already tense atmosphere between French Muslims and non-Muslims.

“We have a lot of extremists that are going to Syria to make jihad. This is unacceptable to me and to French Muslims, but you cannot fight this kind of behavior by banning Muslim people’s clothing and bathing suits,” Ben Mohamed told CBS News.