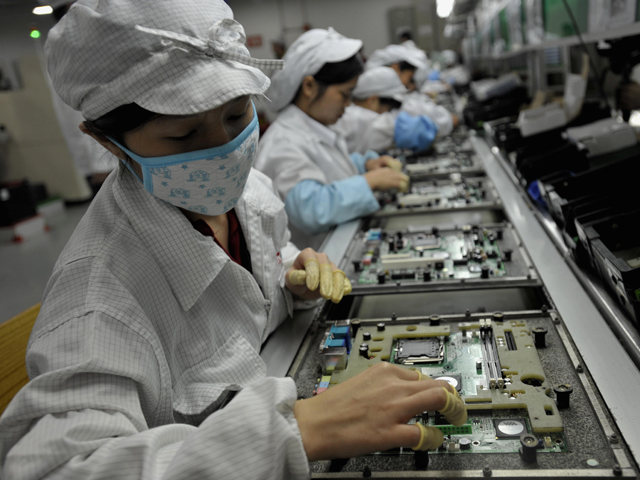 (CBS News) Questions over labor violations at Foxconn have resurfaced. This time, the manufacturing plant is under fire over allegations that it forced interns to work on assembly lines to build iPhones, by telling the students they would not graduate school if they did not work.

According to a New York Times report, students are allegedly being forced by teachers to work in factories in order to address staffing issues.

Demand for Apple's next iPhone is driving the need for more workers at the Chinese company. Foxconn manufactures about 50 percent of the world's electronics for companies like Microsoft, Amazon and Samsung.

"They don't want to work there - they want to learn," Li Qiang, founder of advocacy group China Labor Watch told the Times. "But if they don't work, they are told they will not graduate, because it is a very busy time with the new iPhone coming, and Foxconn does not have enough workers without the students."

According to the Times, local newspapers reported that students were forced to work 12-hour days and some did not have an educational path that aligned with an internship at Foxconn.Some students who are studying law or English are reportedly forced to work in assembly lines to meet the demand for iPhones.

Foxconn denied the allegations and in a statement given to the Times, said that schools "recruit the students under the supervision of the local government, and the schools also assign teachers to accompany and monitor the students throughout their internship."

The Fair Labor Association (FLA), which has been commissioned by Apple to investigate working conditions at Foxconn could not confirm the claims made by China Labor Watch, but a recent report released by the FLA said the progress is being made at Foxconn, including reforms to its internship program.

The issues at Foxconn came to light and after an explosive expose by the Times - with Apple at the center of the storm. Apple CEO Tim Cook released a letter to employees, saying that the company cares about every worker in its supply chain.

Apple entered a partnership with the FLA in January. In doing so, the company agreed to uphold the FLA's workplace code of conduct throughout their entire supply chain. Foxconn agreed to make improvements by July 1, 2013.

Foxconn isn't the only supplier that's made headlines. Samsung recently was scrutinized because of allegations by China Labor Watch that the company employed child labor. Samsung said it planned to audit 250 of its suppliers.

Samsung manufacturer in China employs child labor, group alleges
Samsung to audit 250 of its suppliers in China amid allegations of child labor violations

Apple did not immediately reply to CBS News' request for comment, but the company does mention internships in a portion of its supplier responsibility report:

"Our standards also require factories to adhere to student labor laws and to ensure that schools and universities follow the laws as well, which is particularly important as factories increasingly turn to these institutions for student interns."

According to the FLA's report, an annual evaluation of Foxconn's internship program is planned for Dec. 31, 2012.