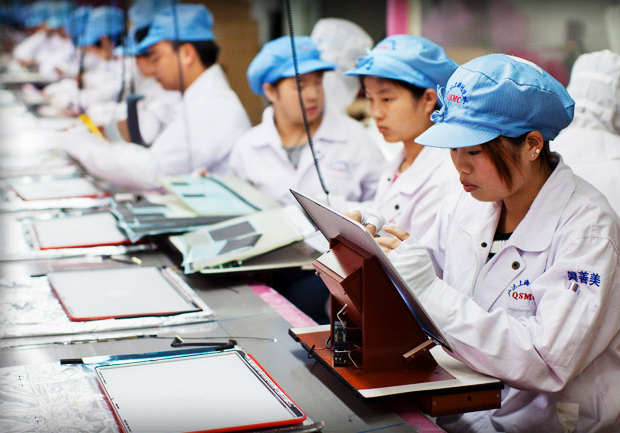 The blog 9to5mac obtained a copy of a letter Cook sent to Apple employees yesterday.

"We care about every worker in our worldwide supply chain," Cook said in the email. "Any accident is deeply troubling, and any issue with working conditions is cause for concern. Any suggestion that we don't care is patently false and offensive to us."

Although, there are reports Apple has audited factories and demanded changes, some allege the company doesn't push hard enough to make a real change across the industry.

A former Apple executive spoke with the Times, but requested anonymity because of confidentiality agreements.

"We've known about labor abuses in some factories for four years, and they're still going on," said the former Apple executive. "Why? Because the system works for us. Suppliers would change everything tomorrow if Apple told them they didn't have another choice."

The problem lies in the difficulty in finding a new supplier. Foxconn, where iPhones and iPads are manufactured, is the only factory that can keep up with the demand for Apple products. In case you're wondering, yes, Foxconn is the factory where hundreds of workers threatened to commit suicide because of unbearable working conditions.

The Times put a human face behind the lightening-fast iPhone or iPad release. But, until consumers voice their concerns over labor conditions overseas, it's unlikely there will be massive changes anytime soon.

As a company and as individuals, we are defined by our values. Unfortunately some people are questioning Apple's values today, and I'd like to address this with you directly. We care about every worker in our worldwide supply chain. Any accident is deeply troubling, and any issue with working conditions is cause for concern. Any suggestion that we don't care is patently false and offensive to us. As you know better than anyone, accusations like these are contrary to our values. It's not who we are.

For the many hundreds of you who are based at our suppliers' manufacturing sites around the world, or spend long stretches working there away from your families, I know you are as outraged by this as I am. For the people who aren't as close to the supply chain, you have a right to know the facts.

Every year we inspect more factories, raising the bar for our partners and going deeper into the supply chain. As we reported earlier this month, we've made a great deal of progress and improved conditions for hundreds of thousands of workers. We know of no one in our industry doing as much as we are, in as many places, touching as many people.

At the same time, no one has been more up front about the challenges we face. We are attacking problems aggressively with the help of the world's foremost authorities on safety, the environment, and fair labor. It would be easy to look for problems in fewer places and report prettier results, but those would not be the actions of a leader.

Earlier this month we opened our supply chain for independent evaluations by the Fair Labor Association. Apple was in a unique position to lead the industry by taking this step, and we did it without hesitation. This will lead to more frequent and more transparent reporting on our supply chain, which we welcome. These are the kinds of actions our customers expect from Apple, and we will take more of them in the future.

We are focused on educating workers about their rights, so they are empowered to speak up when they see unsafe conditions or unfair treatment. As you know, more than a million people have been trained by our program.

We will continue to dig deeper, and we will undoubtedly find more issues. What we will not do--and never have done--is stand still or turn a blind eye to problems in our supply chain. On this you have my word. You can follow our progress at apple.com/supplierresponsibility.

To those within Apple who are tackling these issues every day, you have our thanks and admiration. Your work is significant and it is changing people's lives. We are all proud to work alongside you.