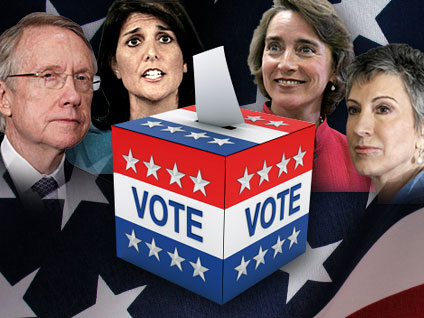 Voters in twelve states go to the polls today for primaries that will help decide whether Democrats maintain their hold in Congress in the November midterm elections. Here's CBSNews.com's guide to the four most interesting contests:

1. Nikki Haley's Wild Ride: It's been quite a campaign for Republican Nikki Haley, who is hoping to replace Mark Sanford as South Carolina governor. Thanks in large part to the backing of Sarah Palin, Haley shot to the top of the polls in the crowded GOP field. She was then hit by not one but two allegations of extramarital affairs - both of which she denied. And then, to top it off, she was called "raghead" by a political rival who apparently takes issue with the fact that her parents are Indian immigrants. (If it's any consolation, the rival in question, state Sen. Jake Knotts, also included President Obama in the "raghead" category.)

All this doesn't seem to have much hurt Haley: A weekend automated poll found her to be 20 points ahead of rivals Rep. Gresham Barrett, Attorney General Henry McMaster and Lt. Gov. Andre Bauer. If no candidate gets 50 percent of the vote, the top two candidates will enter a runoff - which is bad news for the frontrunner but potentially good news for connoisseurs of South Carolina's political theatre. (Two words: Appalachian Trail.) Incidentally, Haley has vowed to resign if she is elected and proof that she had an affair comes to light.

2. Harry Reid Cheers on the Tea Party: They make strange bedfellows, Democratic Senate Majority Leader Harry Reid and the Tea Party movement. But for one day, at least, they're on the same side: Both want to see Sharon Angle win Nevada's GOP primary.

The reason? Reid, whose approval ratings in Nevada are dismal, seems like a great candidate for a high-profile loss. In the general election, he was widely expected to face Sue Lowden, the establishment choice and former state party leader. (He already ran ads against her.) But Lowden has stumbled - she famously suggested bartering health care for chickens - while Angle has shined, winning the backing of the Tea Party Express and the anti-tax Club for Growth.

Angle now looks like the frontrunner over Lowden and businessman Danny Tarkanian. And that's good news for Reid, who hopes she is too extreme to win in a general election, even against an incumbent whose approval ratings are low. His well-funded campaign will have a field day with Angle's past positions, among them potentially privatizing and/or phasing out Social Security, closing the Department of Education and repealing the 16th Amendment, which allows the federal income tax that accounts for about half the government's total revenue.

3. Blanche Lincoln and the Case of the Disappearing Incumbent: This could be the end of the road for Blanche Lincoln, the moderate Democratic senator from Arkansas who garnered the labor movement's wrath for wavering on the health care bill and opposing legislation that would make it easier to form unions.

Lincoln got pushed to a runoff last month thanks to a challenge from Lt. Gov. Bill Halter, who has benefited from an aggressive push by unions to send the message that candidates who oppose their agenda will pay a heavy price. While both Lincoln and Halter face an uphill battle in a general election against likely opponent Rep. John Boozman, labor will consider a Halter victory today a win no matter what happens in November.

Lincoln recently played perhaps her strongest card, getting former President (and fellow Arkansan) Bill Clinton to stump and appear an ad for her. She has cast unions' efforts as meddling by Washington interests who are trying to use her for their own agenda. If she goes down, she'll be the third incumbent, after Sens. Arlen Specter and Bob Bennett, to fail to even reach the general election in this campaign cycle.

4. The Wealthy Republican Women of California: It's easy to get Carly Fiorina and Meg Whitman mixed up: Both are Republican former CEOs seeking elected office in the Golden State. And both are expected to win their primaries. Fiorina, who ran Hewlett Packard, is leading relatively moderate Rep. Tom Campbell and Tea Party favorite Chuck DeVore in the battle to take on Democratic Sen. Barbara Boxer in November. And Whitman, the former eBay CEO, has weathered attacks from California Insurance Commissioner Steve Poizner to enter the day as the front-runner to take on expected Democratic gubernatorial nominee Attorney General Jerry Brown.

Both women have spent lavishly to get where they are - Whitman has laid out $81 million already, $71 million of it her own money - though political opponents have not gotten much traction in trying to make their spending an issue. (The California Nurses Association has dubbed Whitman "Queen Meg.") More problematic may be the decision by both women, particularly Fiorina, to tack right to survive to the general election. Fiorina, who has the backing of Sarah Palin, opposes abortion rights and is on record as saying people on the no-fly list should be allowed to purchase guns; both women have taken hard lines on immigration, a risky proposition in California that could cost them in the general election.