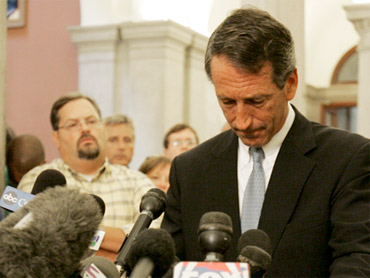 "I've been unfaithful to my wife, and I developed a relationship with what started as a dear, dear friend from Argentina," he said, breaking down in tears.

Sanford returned from a trip to Buenos Aires Wednesday morning. He told reporters he was "obviously not" alone there.

Asked if he was separated from his wife, Sanford said, "I guess in a formal sense we're not."

But Jenny Sanford put out a statement following the press conference saying she asked her husband to leave two weeks ago as part of a "trial separation" in order to "maintain my dignity, self-respect, and my basic sense of right and wrong."

Watch CBS Videos Online
"During this short separation it was agreed that Mark would not contact us," she said. "I kept this separation quiet out of respect of his public office and reputation, and in hopes of keeping our children from just this type of public exposure. Because of this separation, I did not know where he was in the past week." (Read more of Jenny Sanford's statement>.)

The governor, who was first elected in 2002 and is now in his second term, said that he would resign as chair of the Republican Governors Association. The RGA announced that Gov. Haley Barbour of Mississippi will replace Sanford as chair, effective immediately.

Sanford said he and his wife were trying to "work through" the situation, and that his wife has known about the affair for about five months.

"I've let down a lot of people," Sanford added. "That's the bottom line."

"Sanford's tearful admission of an extramarital affair comes on the heels of Sen. John Ensign's admission last week, and he is the second potential 2012 presidential candidate to announce such a revelation," said CBS News Political Director Steve Chaggaris. "As in the case of Ensign, it's safe to say that Sanford's future as a presidential candidate is all but over." 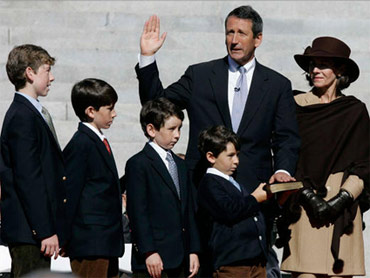 (AP)
"If there's a concern for the Republican Party, it's not that these admissions will have an effect on the various races that will take place this year and in next year's midterm elections," he added. "It's that they're losing some of their fresh faces as potential national voices. Both the 49-year-old Sanford and the 51-year-old Ensign's admissions come at a time when the GOP is struggling to find the next generation of voices to combat a Democratic president and Congress. And losing those voices is never helpful when a party is trying to turn the page on a disastrous election like 2008." (Read Chaggaris' full analysis here>.)

Sanford's office initially explained Sanford's disappearance from the state by saying the governor was hiking on the Appalachian Trail.

Upon arriving at Hartsfield-Jackson International Airport this morning, the Republican governor acknowledged to The State newspaper that he had been in Buenos Aires.

The governor said in a statement following his remarks Wednesday that he "misled" his staff about his whereabouts, "and as a result the people of South Carolina believed something that wasn't true."

"I want to make absolutely clear that over the past two days at no time did anyone on my staff intentionally relay false information to other state officials or the public at large," he added. "What they've said over the past two days they believed to be true, and I'm sorry to them for putting them in this position." 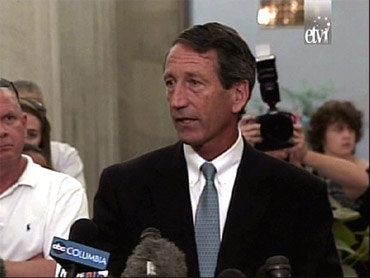 "Once again, Americans have another reason to throw their hands up and say, 'There's another politician who couldn't keep it in his pants, and who abused the public trust,'" said CBS News Chief Political Consultant Marc Ambinder. "Confidence in political institutions is as low as it was after Watergate, and the less confidence the public has in politicians, the less competitive elections will be; fewer good people decide to run for office, and the cycle perpetuates." (Read more from Ambinder on the political fallout from the affair>.)

Sanford, who is 49 years old and has four sons, asked Wednesday afternoon for a "zone of privacy" around himself and his family.

He said the extramarital relationship began innocently and that he had initially counseled the woman involved, who had been separated when she met Sanford, to get back together with her husband. 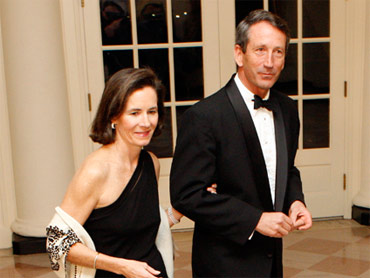 (AP)
The governor told reporters he had known the woman for eight years. He said their relationship began while Sanford was visiting Argentina on an economic development trip more than a year ago, and that he had seen her three times since then.
Sanford was not joined by his wife (pictured at left) in making the announcement Wednesday.

The governor has been one of the most prominent Republican voices opposing President Obama's federal stimulus package, and has won praise from conservatives for his position. He unsuccessfully fought in court to turn down a portion of the money allocated to his state.

In her statement, Jenny Sanford said her husband "has earned a chance to resurrect our marriage."

"This is a very painful time for us and I would humbly request now that members of the media respect the privacy of my boys and me as we struggle together to continue on with our lives and as I seek the wisdom of Solomon, the strength and patience of Job and the grace of God in helping to heal my family," she said.