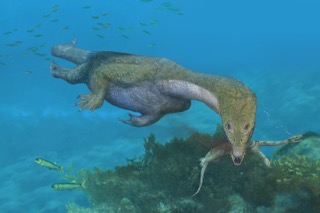 The discovery of a gigantic fanged sea dragon, which hunted the oceans in southwestern China around 247 million years ago, is a sign that global marine ecosystems recovered more broadly than previously thought after the world's worst mass extinction.

Named Nothosaurus zhangi after the researcher who discovered the fossil, it was described in Nature Scientific Reports as being 22-feet-long with fanged-like teeth and one of the largest known lower jaws among a group of Triassic aquatic reptiles called sauropterygians. Researchers uncovered the fossil in southwestern China in 2008 along with several other marine species.

"The huge size is definitely the most apparent feature of this predator," said Jun Liu, one of the authors on the paper and a research associate professor at the Hefei University of Technology.

"They would eat anything they could catch, including large fishes and other marine reptiles at the time," he said. "This predator is in the top of the prehistoric food web. Modern leopard seals from Antarctic might be an appropriate analogue for this giant predator from the ecological perspective."

Until discovering this predator which roamed what was then the Panthalassic and western Tethyan oceans, there was a debate as to whether a complex ecosystem had been completely reestablished following the Permian-Triassic mass extinction.

The event, known as the Great Dying, occurred about 252 million years ago and is believed to have wiped out from 93 percent to 97 percent of all species. Some believed it took millions of years for the earth's biodiversity to recover.

Scientists still don't know for sure what triggered the extinction. They know it was incredibly hot on what was then a supercontinent Pangaea that stretched from pole to pole in the Permian Period, which began 299 million years ago and ended with the massive extinction.

One of the leading theories is that the largest volcanic eruption in Earth's history was to blame.

Before this study, there was evidence that ecosystems in the eastern Tethyan ocean had recovered by the early Middle Triassic Period, but the same had not been shown in other areas.

"Our find shows that the biotic recovery in the sea is globally synchronous," Liu said.