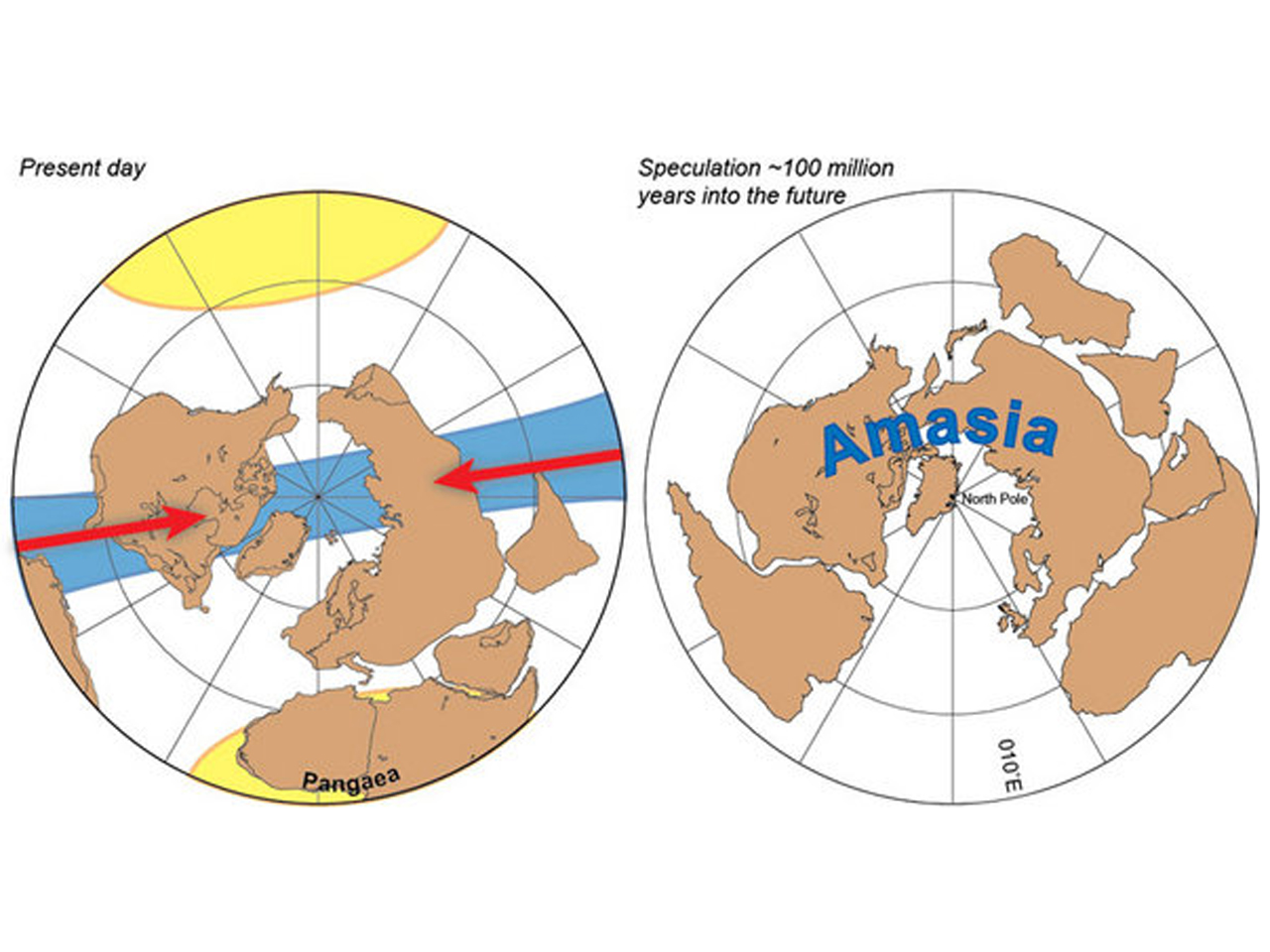 The Earth has been covered by giant combinations of continents, called supercontinents, many times in its past, and it will be again one day in the distant future. The next predicted supercontinent, dubbed Amasia, may form when the Americas and Asia both drift northward to merge, closing off the Arctic Ocean, researchers suggest.

Supercontinents are giant landmasses made up of more than one continental core. The best-known supercontinent, Pangaea, was once the world's only continent -- it was on it that the dinosaurs arose -- and was the progenitor of today's continents.

Conventional models of how supercontinents evolve suggest they form on top of the previous supercontinent, known as introversion, or on the opposite side of the world from that supercontinent, known as extroversion. Under these models Amasia would therefore either form where Pangaea once was, with the Americas meeting with Asia to close off the Atlantic Ocean, or form on the other side of the planet from where Pangaea was, with the Americas merging with Asia to close off the Pacific Ocean.

Now, geologists suggest that Amasia might emerge sideways from where Pangaea once existed, in what is now the Arctic, a process known as orthoversion. Moreover, this new model seems consistent with models of how past supercontinents formed, said researcher Ross Mitchell, a geologist at Yale University.

Which way did it form?

The introversion model, on the one hand, assumes that the oceanic plate between continents that formed when a supercontinent pulled apart has stopped spreading. As such, there is nothing to keep the continents from drifting back together and forming another supercontinent. The extroversion model, on the other hand, proposes that the oceanic plate that formed when a supercontinent pulled apart would keep spreading. The continents then drift away from it, meeting up on the other side of the planet to merge.

The new orthoversion model from Mitchell and his colleagues bases its motion of continents on where the edges of past supercontinents were. For instance, when Pangaea broke up, its rim dove or subducted downward into the earth. This subduction zone, which encircles the Pacific Ocean, is known as the Ring of Fire, and is where many of the largest earthquakes and volcanic eruptions now take place.

The orthoversion model proposes that the subduction zone surrounding a one-time supercontinent drives where its former components end up going. This suggests that modern continents will slide either north or south around the Ring of Fire. Since the Caribbean Sea between North and South America and the Arctic Ocean between the Americas and Asia appear transient in nature, the researchers suggest the Americas and Asia will go north instead of south, meeting at the Arctic to form Amasia.

To see how the components of supercontinents moved, scientists analyzed the impact that Earth's magnetic field has on ancient rocks. Magnetic minerals in molten rock can act like compasses, aligning with the planet's magnetic field lines, an orientation that gets frozen in place once the rock solidifies. Since these lines generally run north-south, looking at the way these minerals point can shed light on how the landmasses they are a part of might have drifted in space over time.

The researchers found that Pangaea apparently formed at nearly a 90-degree angle from the direction along which Rodinia fragmented -- that is, Pangaea formed neither where Rodinia once was nor on the opposite side of the planet, but somewhere nearly exactly between those spots. Rodinia seemingly emerged in a similar manner from Nuna. Both findings support orthoversion as the explanation for how supercontinents form and fragment.

When to expect Amasia

These findings could also help scientists better understand the history of life on this planet, by figuring out where landmasses were and how organisms might have dispersed.

As to when Amasia might form, that is "difficult to answer, because the supercontinent cycle is not as regular as the seasonal cycle, for example," Mitchell said. "But we can get a clue from Earth's history -- the cycle is speeding up, such that the recurrence interval between successive supercontinents has become less and less. Knowing that Pangea formed 300 million years ago, we can predict a range of Amasia ages from 50 to 200 million years from now."

The scientists detailed their findings in the Feb. 9 issue of the journal Nature.

The World's Biggest Oceans and Seas