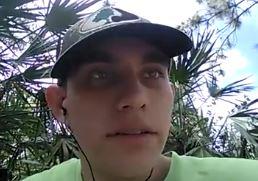 FORT LAUDERDALE, Fla. -- In chilling cellphone videos released by prosecutors Wednesday, the suspect in February's massacre at a Parkland, Florida high school boasts about his intention to become the next school shooter. The three short videos were found on the cellphone of suspect Nikolas Cruz after the Feb. 14 shooting at Marjory Stoneman Douglas High School that killed 17 people and injured 17 others.

CBS News is not publishing the videos.

The first two videos appear to have been taken before the day of the shooting. In them, he lays out details of his plans for the attack.

In the third video, with the camera apparently pointed at pavement, he talks about his loneliness, anger and hatred, and announces, "Today is the day. ...The day of my massacre shall begin."

"I live a lone life. I live in seclusion and solitude. I hate everyone and everything. But the power of my AR you will all know who I am," he says.

He talks about being "told what to do" and being treated as an "idiot" and "dumbass."

"When in real life, you're all the dumbass," Cruz said. "You're all stupid, brainwashed by the political government programs. You will all see, you will all know who by name is."

He also speaks of love for a person named "Angie" and says he hopes to see her in the afterlife.

Fred Guttenberg, whose daughter Jaime was one of the victims, told the Sun-Sentinel he read a transcript of the videos but chose not to look at them.

"I already know what he did," Guttenberg told the paper. "He's evil. Repulsive. He deserves to be dead. ... He talked about how he was going to be someone now. It's a level of thought that I can't comprehend. It looks, from the words, like the kid had joy. I don't want to see the delight he took in planning the murders of our children."

Andrew Pollack, whose daughter Meadow was among the dead, told the Sun-Sentinel, "It just shows this kid was competent. This whole thing was premeditated murder. This kid knew exactly what he was doing."

Cruz, 19, is charged with 17 counts of murder and 17 counts of attempted murder in the attack. His lawyers have repeatedly said Cruz would plead guilty if offered a sentence of life without parole, but prosecutors plan to seek the death penalty.