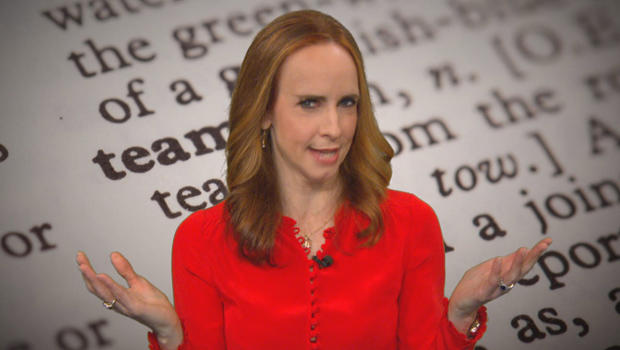 I'm going to need your help "unpacking" and "drilling down" on a word that's getting some increasingly indiscriminate use, and Team, that word is team.

Are you part of a "team" at work? Do you get emails that start with "Team, …" and hear people say, "Let me run that by my team"?

What is "a team," exactly? Let's go to the dictionary….

A team is defined as "a number of persons associated in some joint action." It's also "two or more animals harnessed together to draw a vehicle."

Which gets to the heart of why some might object to being called "Team." It can feel a little non-consensual. Like, if you're just told you're on the team, did you sign up? Did you try out? Were you drafted? Or harnessed, like an ox?

Extended interview: Lizzo on her flute and being a "band geek"

If you're a boss (or a "Leader," as corporate America would prefer you to say), it feels better to call the people who work for you "Team" rather than calling them "Staff," or "Direct Reports," or "Minions." "Colleagues" is formal; "Folks" sounds folksy. "Comrades"? "Peeps"? "Squad"? "Y'all"? "All y'all"?

I applaud leaders who want to be collegial and egalitarian. But throwing out the T-word can also be self-serving. Yes, it enrolls your co-workers, but it also creates plausible deniability. If you say "Team," it makes everyone responsible. And it sure is useful to postpone making decisions or deliver bad news, when you can blame it on "The Team."

Maybe we back away altogether from the sports metaphor? I love musical theatre. Why don't we replace "Team" with "Ensemble"?

I did have a hair and makeup team today. (This is what I looked like before, and after…)

We've got a great group here at SunMo (When you work here, you get to call it "SunMo"!), but we don't call ourselves a "Team," I guess 'cause there's an "I" in "Sunday Morning"?

Gosh, maybe if we did call ourselves "Team," we'd get so much more done – like we'd need more Sundays every week just to air all our shows!