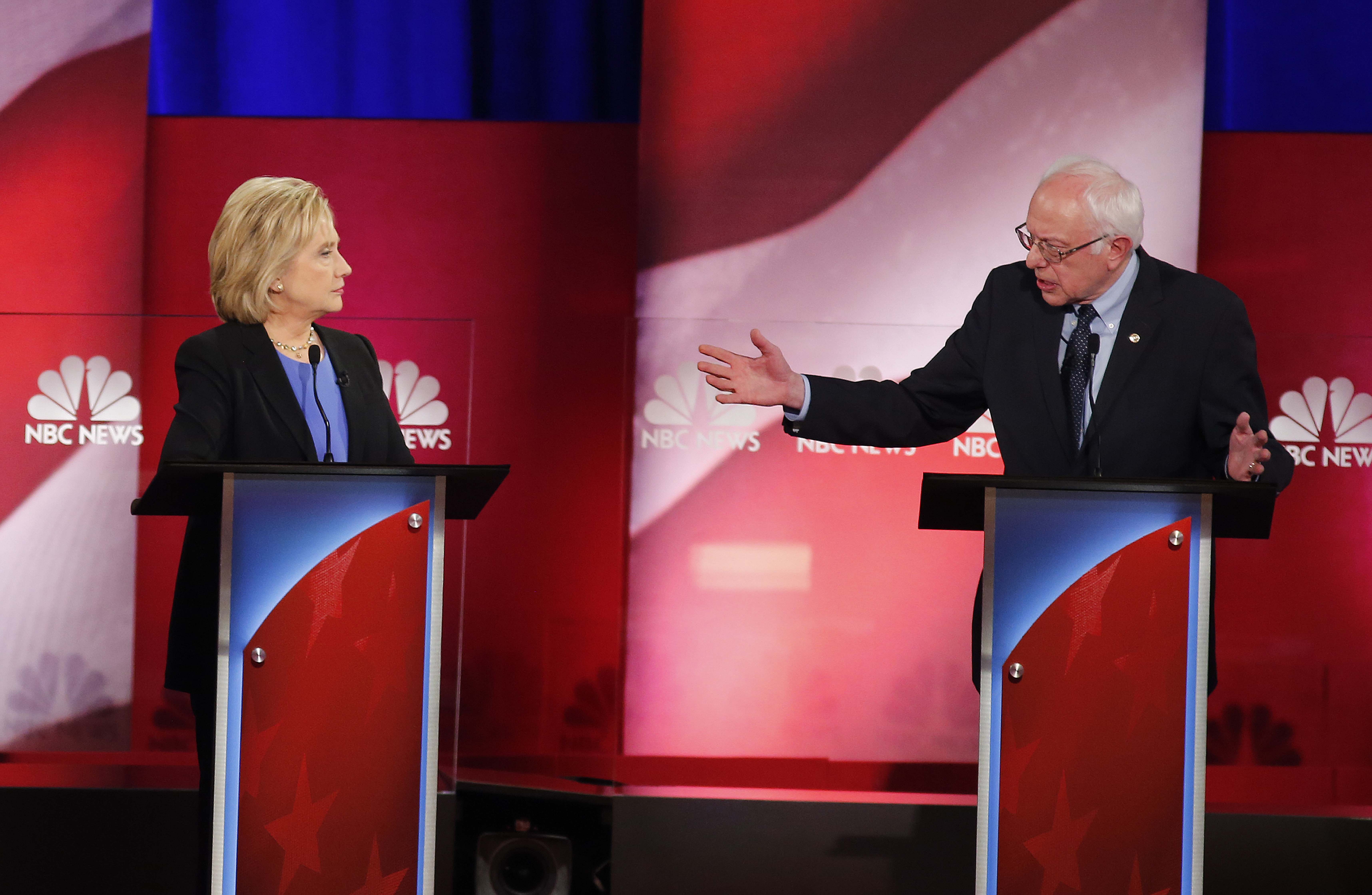 With only two weeks before the Iowa caucuses, Hillary Clinton once again went on the offensive at Sunday night's Democratic debate over Sen. Bernie Sanders' record on gun issues. At this debate, she listed a series of previous votes cast by the independent senator from Vermont that were viewed as unfavorable to gun control activists.

"He has voted with the NRA, with the gun lobby numerous times," Clinton said on stage in Charleston, South Carolina.

Clinton, who urged Sanders on CBS's Face the Nation to "flip-flop" more so his positions on guns would be closer to hers, said Sanders voted five times against the Brady Bill, which ultimately required a five-day waiting period and created an instant background check system for handgun buyers in the 1990s.

The Brady Bill had come up in Congress numerous times since 1987 and Sanders did, in fact, vote against different versions of it five times. A few months after Sanders came to Capitol Hill in 1991 as a member in the House, he voted against a version of the Brady Bill that would have required a waiting period of at least seven days. Sanders later voted against a version modified by the Senate that would have decreased the waiting period to five days.

In 1993, the Brady Bill was reintroduced with a five-day waiting period. Sanders voted against that version, but voted in favor of an amendment backed by the NRA to create instant criminal background checks. That year, Sanders also voted against an amendment that would have ended state waiting periods and in favor of an amendment to give people who are denied a gun the right to know why, according to Politifact. At the end of November that year, Congress passed the final bicameral compromise that required a five-day waiting period and instant criminal background check system.

Sanders opposed the final version. Jeff Weaver, his current campaign manager, told Politifact last summer that Sanders voted against the measure because he believed the waiting period was a federal overreach.

Clinton also claimed that Sanders voted for the "Charleston loophole." The loophole refers to the Charleston massacre last June in which Dylan Roof shot and killed nine people in a historic black church. The FBI performs background checks on gun buyers in South Carolina and if the check isn't denied or completed in three days, the gun seller can sell the guy to the prospective buyer, according to The Washington Post. Due to a clerical error, this is how Roof obtained a gun even though he shouldn't have been able to. Gun advocates say the elimination of the loophole would have prevented Roof from getting the gun. The three-day waiting period resulted from a provision in the Brady Bill.

"He voted to let guns go onto the Amtrak, guns go into National Parks. He voted against doing research to figure out how we can save lives," Clinton added during Sunday's debate.

In 1996, Sanders did vote against an amendment when he served in the House that would have restored funding to the Centers for Disease Control and Prevention (CDC) for gun violence research. That year, Republicans successfully included language restricting the CDC from conducting that research. That ban has remained in place ever since, though Sanders called in December for it to be stripped.

For his part, Sanders argued Sunday that he has a D- rating from the NRA, supported the assault weapons ban as far back as his 1988 run for Congress and supported an instant background check from "day one."