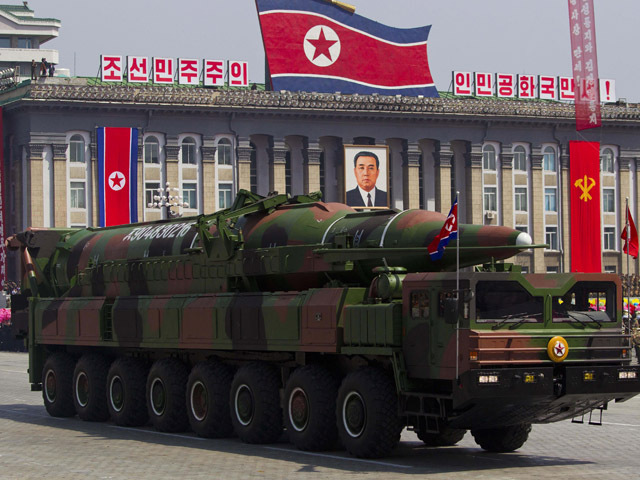 (AP) TAIPEI, Taiwan - The enormous, 16-wheel truck that North Korea used to carry a missile during a recent parade likely came from China in a possible violation of U.N. sanctions meant to rein in Pyongyang's missile program, experts say.

The carrier, also believed capable of launching missiles, caught the eye of experts during last Sunday's military show in Pyongyang because it was the biggest carrier yet displayed by North Korea and gives the country- truculently at odds with the U.S., Japan and South Korea — the ability to transport long-range missiles around its territory, making them harder to locate and destroy.

The large size of the vehicle "represents a quantum leap forward" for the North Koreans, said Wendell Minnick, a reporter on Asian military developments for Defense News, a Washington-based publication.

Unlikely to have been made by North Korea because of its technical sophistication, experts said the design of the vehicle shows that China is the probable source. Pinning a sanctions-busting charge on Beijing would be difficult, however, because it would be hard to prove that Beijing provided the technology for military purposes or even that it sold the vehicle directly to North Korea, the experts said.

The vehicle also can be used in other fields, like oil exploration. At the same time North Korea might have gotten it from another country in a re-export deal.

"It's very possible there was no intended violation of sanctions by China on this piece of equipment," said arms transfer expert Pieter Wezeman of the Stockholm International Peace Research Institute.

On Thursday, China denied any wrongdoing in connection with the vehicle's appearance at the North Korean parade. Foreign Ministry spokesman Liu Weimin told a regular news conference that China is against the spread of weapons of mass destruction and carriers for such weapons. He said China follows international laws and has strict rules against the spread of such weapons.

U.S. State Department spokesman Mark Toner said China has provided repeated assurances that it is complying fully with U.N. Security Council resolutions sanctioning North Korea. "We take them at their word," he told a news briefing in Washington.

Analyst Ted Parsons of IHS Jane's Defence Weekly first raised the possibility that the missile-carrying vehicle came from China, citing similarities to Chinese design patterns in the windscreen, the windscreen wiper configuration, the door and handle, the grill, the front bumper lighting configurations, and the cabin steps.

"The 16-wheel TEL is apparently based on a design from the 9th Academy of the China Aerospace Science and Industry Corporation," he said.

China military analyst Richard Fisher of the International Assessment and Strategy Center in suburban Washington agreed, citing technological challenges as a major reason to believe that Pyongyang could not have developed the vehicle on its own.

"This is definitely a CASIC vehicle that was probably produced specifically for export to North Korea," Fisher said. "The North Koreans don't have the ability to make something like this themselves."

Fisher said that keeping the 16 wheels in alignment would present a particular challenge to North Korea, because of the requirement to develop a sophisticated on board computer system.

This kind of system, he said, was "almost certainly beyond them."

CASIC designs vehicles of up to 21-meter-long (68 feet) trucks with maximum loading capacity of 122 tons for production at its Hubei Sanjiang Space Wanshan Special Vehicles Co., Ltd. in central China.

CASIC's press office did not respond to request for comment. A company statement from October 2010 cited the export of the first 16-wheel vehicle without specifying the purchasing country. The sales department of Hubei Sanjiang confirmed that a vehicle or vehicles of the 16-wheel type had been sold abroad, but refused to disclose the buyer, saying it was "a secret."

While agreeing that the vehicle in Sunday's parade probably came from China, Wezeman cautioned that it would be difficult to prove that Beijing had violated United Nations Security Council Resolution 1718 of October 14, 2006, in providing it to North Korea. That measure bans countries from supplying Pyongyang with items related to ballistic missiles.

CASIC descriptions of its 16-wheel vehicle make specific reference to its possible use in civilian activities including oil exploration.

While acknowledging the possibility that the vehicle seen in Sunday's parade was re-exported from Pakistan, Fisher was adamant that it had almost certainly been built in China for North Korean customers.

"I think that CASIC has put together as many as six or seven of these vehicles and that maybe half of them have been sold to Pyongyang," he said.

On Thursday Jane's Defence Weekly reported that following the Pyongyang parade, a U.N. Security Council investigation into the possibility of a sanctions breach was under way.

China, North Korea's main political and economic ally, supported the passage of the Security Council resolution banning the provision of missile related items to North Korea. But it is also determined to ensure that Pyongyang's current rulers remain in power, and to that end provides the regime military and other assistance.

North Korean space officials, meanwhile, said in a statement Thursday that they will keep pushing forward with their space development program. The statement said, without elaborating, that the North has figured out why its long-range rocket last week failed to put a satellite in orbit. The United States and South Korea called the launch a cover for a banned test of ballistic missile technology.