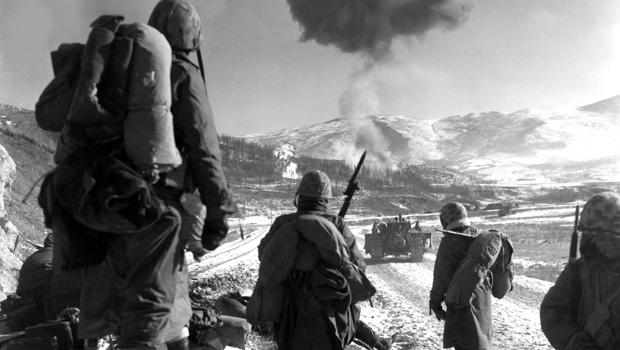 In his new book, "On Desperate Ground: The Marines at the Reservoir, the Korean War's Greatest Battle" (Doubleday), author Hampton Sides ("Ghost Soldiers," "In the Kingdom of Ice") recounts the fateful experience of U.S. Marines and their clash with overpowering Chinese forces at the Chosin Reservoir during a grueling 1950 campaign. Read an excerpt from "On Desperate Ground" below, and don't miss David Martin's interview with Hampton Sides on CBS' "Sunday Morning" October 14!

Sun-Tzu says that in battle there are nine kinds of situations, nine kinds of "ground." The final and most distressing type is a situation in which one's army can only be saved from destruction by fighting without delay. It is a place with no shelter, and no possibility of easy retreat. If met by the enemy, an army has no alternative but to surrender, or fight its way out of its predicament. Sun-Tzu calls this "desperate ground."

In the misting rain, they pressed against the metal skins of their boats and peeked over the gunwales for a glimpse of the shores they were about to attack. Some thirteen thousand men of the 1st Marine Division, the spearhead of the invasion, had clambered down from the ships on swinging nets of rope and then had crammed themselves into a motley flotilla of craft that now wallowed and bobbed in the channel. Several of the rusty old hulks, having been commandeered from Japanese trawlermen, smelled of sour urine and rotten fish heads.  The Marines, many of them green from seasickness, saw the outlines of the charred foothills that rose above the port, and caught the scent of the brackish marshes and the slime of the mudflats  Corsairs, bent-winged liked swallows, dove over the city, dropping thousand-pound bombs and sending five-inch rockets deep into hillside nests where the enemy was said to be dug in. Far out at sea, the naval guns rained fire upon the city beyond the beaches, damaging tanks of butane that now flared and belched palls of smoke

On this warm, humid morning of September 15, 1950, the Marines had arrived at their destination halfway around the world, to stun their foe and turn the war around: A surprise amphibious attack, on an immense scale, deep behind the battle lines. Only a few months ago, these young men, fresh from their farms and hick towns, had piled into chartered trains and clattered across America to California. Then they climbed aboard transport ships where many of them did their basic training, learning how to strip and rebuild M-1 rifles, drilling on the crowded decks, practicing their marksmanship on floating targets towed from the fantails. They crossed the Pacific and stopped briefly in Japan, then heaved their way through a full-scale typhoon. They rounded the peninsula and moved in convoy up the west coast, through the silted waters of the Yellow Sea.

By the 13th of September, the ships began to concentrate, two hundred sixty one vessels in all, carrying more than 75,000 men and millions of dollars worth of war materiél. On the 14th, the armada was closing in on its target – the narrow confines of Flying Fish Channel. The channel led to Inchon, an industrial city of a quarter-million people, whose strategically vital but treacherous port served the capital of Seoul.

On the morning of the 15th, in the seas west of Inchon, the ships ranged along the horizon, a long line of gray bars stitching through the mist. First came the destroyers Swenson, Mansfield, DeHaven. Then the high-speed transports Wantuck, H.A. Bass, Diachenko, and the dock landing ship Fort Marion. Then the heavy cruiser Toledo, the destroyers Gurke, Henderson, and Rochester. Following in their mingled wakes came the British light cruisers Kenya and Jamaica, the attack transports Cavalier and Henrico. Farther out at sea lay the fast carriers, from which the Corsairs rose into the drab skies to make their deadly sorties.

By afternoon, as the Marines drew near to the Inchon seawall, enemy rounds zinged across the water surface and mortar shells crashed haphazardly all around. Within a few minutes the Marines would reach the cut-granite ramparts. They would climb over, and they would set foot on the western shores of central Korea.

What was Korea to these young men? Some fate-ravaged place, an inflamed appendix, a wattle of real estate flapping off the face of the mainland. Though some of the units approaching Inchon had spent the past month bolstering United Nations forces at the southern tip of Korea, most of the 1st Marine Division had no experience with the country. They had little knowledge of Korea's tragic history, no appreciation for how faithfully this proud culture had held on through centuries of turmoil and besiegement. It was a small nation that history had pushed around –a shrimp among whales. The Mongols had had their way with her, the Manchus, the Russians, the Japanese. Now had come the Americans, nervous young men who knew next to nothing about the place, though some had passed around guidebooks filched from hometown libraries.

Korea, they'd learned, was known as the Hermit Kingdom. The Land of the Morning Calm. Its national dish was a hot mess of fermented cabbage. Some Marines had read with astonishment that in parts of Korea, peasants still nourished their crops with night soil and were known to roast the occasional hound for dinner. It was said to be a dirt-poor country, mountainous, swept by Siberian winds, sultry during summer and breathtakingly cold in winter.

But what did the travel manuals really know? God created war, Twain wrote, so that Americans would learn geography, and the men of the 1st Marine Division were about to learn a lot about this tough, sorrowful, scrap of land. While some would find a deep affinity for it, many would come to hate it, for all the things it was, and for all the things it wasn't. But to most of them, more than anything, Korea seemed a long way from home – a long way to come to fight and bleed and die, in a war that was not officially a war, for a cause that at times was not altogether clear, for an endgame that was anybody's guess.

The Marines had a tradition of being the first to fight, the first to kill, the first to die. They didn't earn their reputation by asking many questions. In a few months, they would face the armies of the most populous nation on earth, and would become engaged in one of the more harrowing clashes in the history of warfare. Many would never return home. But for those who survived, Korea would be forever stamped on their psyches, and on their souls. They would never forget what happened here, even if the majority of their countrymen quickly did.

Now the assault vessels angled past the pitted harbor islands of Inchon and made for the bluff face of the seawall, where the breaking surf left a ring of bone-white foam. The bullets whined and smacked in weird patterns upon the surface. A shell screamed overhead, and the Marines crouched a little tighter into the walls of their boats.

Excerpted from "On Desperate Ground: The Marines at the Reservoir, the Korean War's Greatest Battle" by Hampton Sides. Copyright © 20188 by Hampton Sides. Excerpted by permission of Doubleday, a division of Penguin Random House, Inc. All rights reserved. No part of this excerpt may be reproduced or reprinted without permission in writing from the publisher.