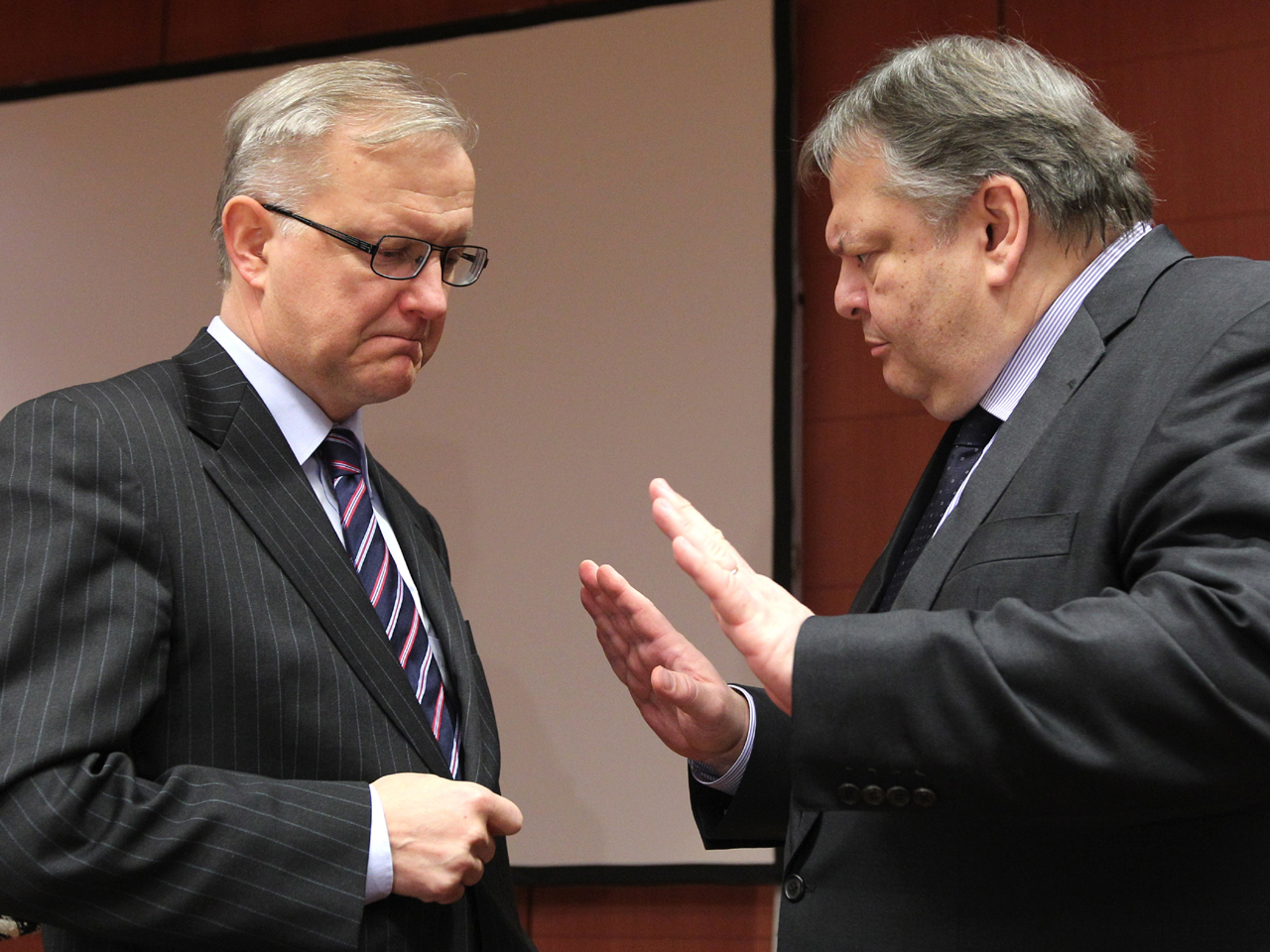 BRUSSELS - Just hours after Greece gave in to painful new job and spending cuts, European ministers declared Thursday that Athens didn't go far enough and demanded more within a week in exchange for a euro130 billion ($170 billion) bailout to stave off bankruptcy.

The ministers gave the debt-ridden country until the middle of next week to find an extra euro325 million ($430 million) in savings, pass the cuts through a divided parliament, and get written guarantees that they will be implemented even after the elections of a new government in April, said Jean-Claude Juncker, the Luxembourg prime minister who chaired Thursday's meeting of finance chiefs of the 17 euro countries.

The new austerity plan, which makes sharp cuts to the minimum wage and thousands of public-sector jobs, ignited fresh criticism from unions and the country's deputy labor minister, who resigned in protest after Greece agreed to the deal. Even debt inspectors conceded that the new measures would keep the country in a recession for a fifth straight year.

But Greece's finance minister warned that the alternative will likely be worse.

"Unfortunately the choice we face is one of sacrifice or even greater sacrifice — on a scale that cannot be compared," Evangelos Venizelos told reporters, after the meeting with ministers from the 16 other countries that use the euro.

Other European officials warned that more severe steps still might be necessary.

"Greece still has its homework cut out," Jan Kees de Jager, the Dutch finance minister, said after the meeting. "A lot of measures need to be clarified and taken."

A European official said earlier he still saw 10 to 15 issues before the deal could be concluded, including doubts that Greece could lower its debt level down to 120 percent of its annual economic output by 2020 and that labor market reforms would restore the country's competitiveness. The official spoke on condition of anonymity because of the sensitivity of the negotiations.

On top of that, the ministers were seriously considering a plan proposed by France and Germany to force Greece to set up a separate account dedicated to repaying its debt, said Olli Rehn, the EU'e economic affairs commissioner.

Such an account would be an unprecedented intrusion into the fiscal affairs of a sovereign state in Europe. The plan underlines the frustration that has built up in the eurozone over Greece's slow reforms over the past two years.

Rehn, calling it a "relevant possibility," did not say whether only money from the bailout would be channeled into the account, or whether it would also contain Greek tax revenue.

Greece is under immense pressure to reach a rescue deal. On March 20, it has to redeem euro14.5 billion ($19.3 billion) in bonds — money which it doesn't have. The country's total debt is euro350 billion ($464 billion) — equivalent to 160 percent of its annual economic output — and unsustainable even for a healthier economy.

Greek Prime Minister Lucas Papademos earlier Thursday said that all major party leaders in the country's coalition government had backed the latest round of cuts, including a 22 percent cut in the minimum wage, firings of 15,000 civil servants and an end to dozens of job guarantee provisions.

Those austerity measures have drawn already-suffering Greeks back onto the streets of Athens in protest.

The support of all major parties was a key demand from Greece's international creditors — but European ministers indicated that they still needed written assurance from the political leaders before Wednesday, when the ministers planned to meet again.

Once all the demands have been fulfilled, the eurozone will give Greece the green light to start implementing a separate bond swap deal with banks and other private investors designed to slice some euro100 billion ($132 billion) off Greece's debt load.

Rehn indicated that the eurozone was relatively content with that deal, but reserved final approval until Wednesday. The swap deal will see investors exchange their old bonds for new ones with half the face value, lower interest rates and longer repayment deadlines. It has to be launched quickly since it is expected to take several weeks to complete.

A forced bankruptcy would likely lead to Greece's exit from the euro common currency, a situation European officials say would hurt other weak countries like Portugal, Ireland and Italy. Financial analysts fear an uncontrolled default could trigger a chain reaction similar to the financial meltdown that followed the 2008 collapse of U.S. investment bank Lehman Brothers.

Greece is expected to rush the new austerity measures through parliament by late Sunday, but Papademos' government is facing growing dissent from the majority Socialist party, which has seen public support in opinion polls drop to single figures.

Unions called for a 48-hour strike for Friday and Saturday in opposition to the new cuts, while Yiannis Koutsoukos, the deputy labor minister who quit Thursday, accused debt inspectors of using "shameless and blackmailing tactics" with the government.

Almost two years of austerity have taken their toll on Greece. Unemployment reached a record 20.9 percent in November, up from 13.9 percent a year earlier, with more than 1 million people without a job. In the 15-24 age group, unemployment has spiked to 48 percent.

And conservative leader Antonis Samaras insisted that Papademos call a spring general election — a move that could make it more difficult for coalition parties to work together.

Almost two years of austerity have taken their toll on Greece. Unemployment reached a record 20.9 percent in November, up from 13.9 percent a year earlier, with more than 1 million people without a job. In the 15-24 age group, unemployment has spiked to 48 percent.