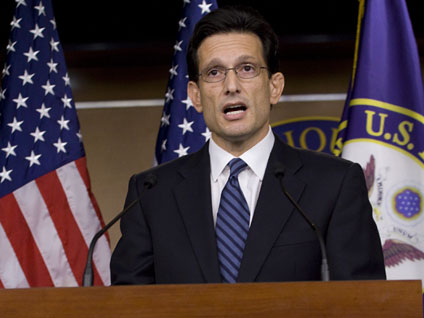 House Republican Whip Eric Cantor (R-Va.) said today a bullet was shot through the window of his campaign office in Richmond, Va. this week, giving just another example of the numerous acts of violence and threats against members of Congress this week.

Just about all the reported incidents have targeted Democratic members in the wake of their support for health care reform, but Cantor today blasted Democrats -- calling out two party leaders in particular -- for "ratcheting up the rhetoric" surrounding the dangerous threats and blaming Republicans for inciting the hostility.

"I've received threats since I assumed elected office, not only because of my position but also because I'm Jewish," Cantor said. "Any suggestion that a leader in this body would incite threats... is akin to saying I would endanger myself, my wife or my children."

Cantor said he has also received threatening e-mails but will not release them lest they spur any further hostility. The congressman decided to talk publicly about the shooting at his office, which occurred around 1 a.m. Tuesday morning, after local police started receiving inquiries about the event.

By contrast, Cantor said he has "deep concerns" that some in the Democratic party -- particularly Rep. Chris Van Hollen (D-Md.), chair of the Democratic Congressional Campaign Committee, and Tim Kaine, chairman of the Democratic National Committee -- are "dangerously fanning the flames by suggesting these incidents be used as a political weapon."

"Instead, he chose to use his press conference to level false accusations," Thornell said. "This is straight out of the Republicans' political playbook of deflecting responsibility and distracting attention away from a serious issue."

Members of Congress met yesterday with the FBI and other law enforcement officials to discuss the threats that have been made against at least 10 members.

The threats continued today, with a suspicious package sent to Democratic Rep. Anthony Weiner (D-N.Y.)'s Queens office. The FBI, New York emergency services and the police are all investigating a letter which contained a threatening message referencing health care and a white powder.

Some Democrats have called out Republicans for egging on the hostility, pointing to specific examples of GOP behavior that could incite violence.

"Michael Steele, the head of the national Republican party, said that Speaker Nancy Pelosi should be put on 'the firing line,'"Rep. Louise Slaughter (D-N.Y.) said in a statement yesterday. "Sarah Palin said 'don't retreat - reload.' And House Minority Leader John Boehner said that a Democratic member of Congress who supported health care reform would be a 'dead man.'"

Richard Trumka, president of the labor federation AFL-CIO, released a statement today calling on leaders of both parties to come together to reject the recent violence. Yet he also condemned the Republican party for their actions on the House floor during last weekend's health care debate.

"When I was at the Capitol on Sunday, I saw Republican lawmakers come out onto balconies and egg on hateful crowds like giddy teenagers, waving signs and chanting to fire up the protesters," he said. "They set the foundation for a dangerous climate, and they must take the lead in stopping it."

The vitriol against lawmakers started last weekend when anti-reform protesters yelled racial epithets at black members of Congress and gay slurs at Rep. Barney Frank (D-Mass.), one of Washington's openly gay lawmakers. Frank has tried to use the incident to rally his supporters, sending out a fundraising e-mail this week that says, "The ugliness in Washington last weekend, which I and others experienced personally, has raised the stakes for the November elections."

"A conservative blogger posted the home address of Congressman Tom Perriello, urging tea partiers to 'drop by.' Other members have had death threats. Democratic offices have been vandalized," read an OFA e-mail with the subject line "Reform under attack." "Can you chip in $25 or more to defend health reform -- and those in Congress who fought to make it possible?"

"You think these 10 house members are getting threats?" Graham reportedly said. "I hate it when somebody does that. Come and listen to my phone one day. What Stupak released is a good day in our office. That's a good day."

Graham was referencing the hateful and hostile messages left for Rep. Bart Stupak (D-Mich.), which you can listen to here.