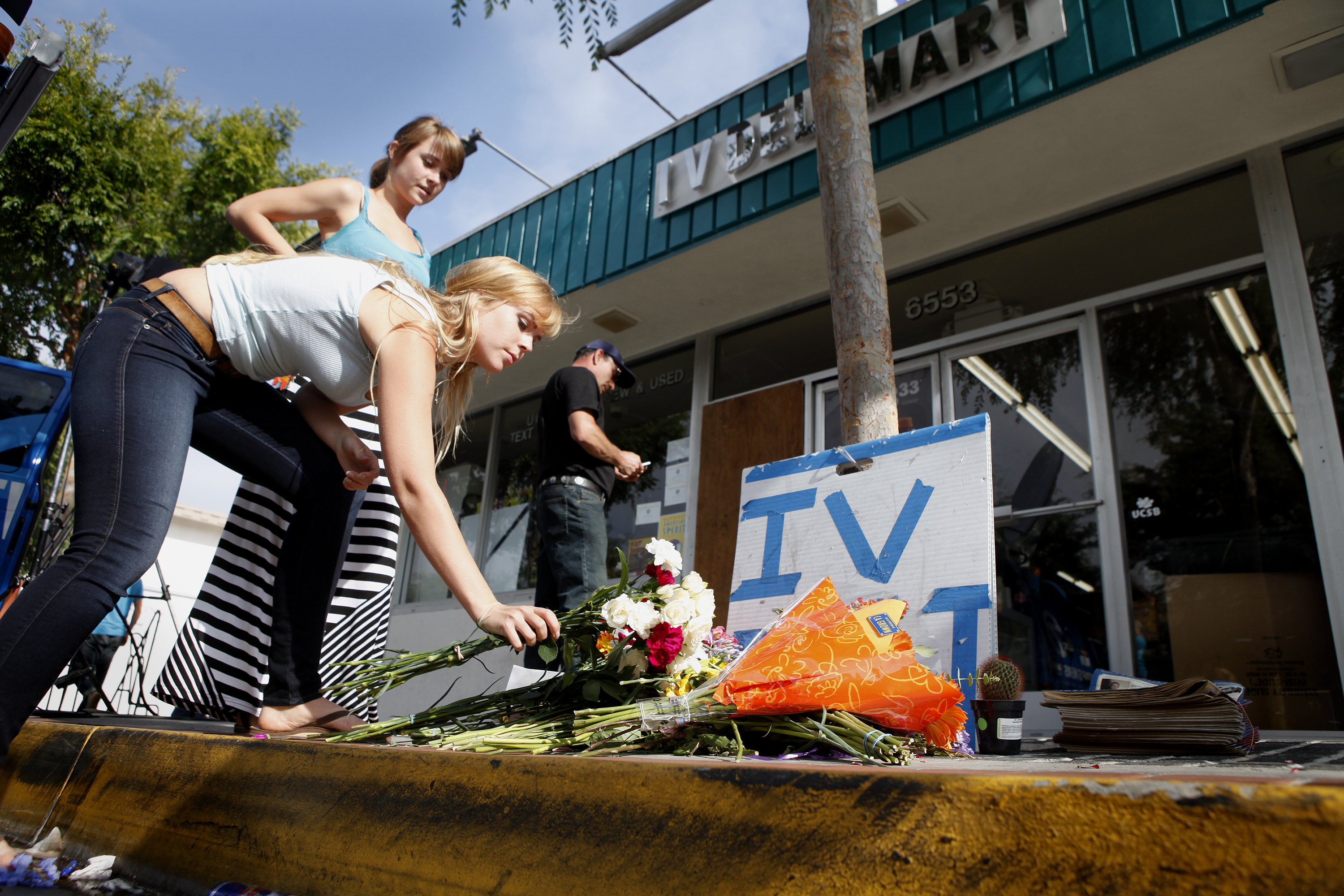 GOLETA, Calif. - It was Friday night when Elliot Rodger's mother got a call from her son's therapist that he had emailed a ranting manifesto about going on a deadly rampage.

The mother went to her son's YouTube channel and found the video in which he threatens to kill people. She alerted authorities and set off frantically with her ex-husband to Santa Barbara.

By the time they arrived, it was too late: their son had killed six people and then, authorities say, himself.

"They're in deep, deep grief," family friend Simon Astaire said Sunday as he recounted the family's ordeal. "Their grief which is nearly unbearable to be close to is as much for the loss of their son as for the victims."

It was the second time in recent months that Rodger's mother tried to intervene. In April, she had called one of her son's counselors after seeing bizarre videos he had posted on YouTube, though not the disturbing one he posted shortly before the killings, Astaire said. The counselor called a mental health service, which then called police.

Santa Barbara County Sheriff's deputies who showed up at Rodger's doorstep to check on his mental health, however, weren't aware of any videos, the department's spokeswoman Kelly Hoover said. They concluded after their visit that the well mannered, if shy, young man posed no risk.

Sheriff Bill Brown has defended the deputies' actions, but the case highlights the challenges that police face in assessing the mental health of adults, particularly those with no history of violent breakdowns, institutionalizations or serious crimes.

"Obviously, looking back on this, it's a very tragic situation and we certainly wish that we could turn the clock back and maybe change some things," Brown told CBS' "Face the Nation" on Sunday.

"At the time deputies interacted with him, he was able to convince them that he was OK," he said.

It's not clear whether the mother's concern about the videos was conveyed to the deputies. An email to the counselor was not immediately returned.

Doris A. Fuller, executive director of the Virginia-based Treatment Advocacy Center, said California law has provisions that permit emergency psychiatric evaluations of individuals who pose a serious threat, but that was never triggered.

Rodger's family has disclosed their son was under the care of therapists. In his manifesto, Rodger wrote that he had been prescribed the antipsychotic Risperidone but refused to take it.

"Once again, we are grieving over deaths and devastation caused by a young man who was sending up red flags for danger that failed to produce intervention in time to avert tragedy," Fuller said in a statement.

"In this case, the red flags were so big the killer's parents had called police ... and yet the system failed," she said.

Rodger, writing in a manifesto, said the police asked whether he had suicidal thoughts, and he was able to convince them he was fine. He said he was relieved his apartment wasn't searched because deputies would have uncovered the cache of weapons he used in the rampage in Isla Vista.

He posted at least 22 YouTube videos. He wrote in his manifesto that he uploaded most of his videos in the week leading up to April 26, when he originally planned to carry out his attacks. He postponed his plan after catching a cold.

"On the week leading up to date I set for the Day of Retribution, I uploaded several videos onto YouTube in order to express my views and feelings to the world, though I don't plan on uploading my ultimate video until minutes before the attack, because on that video I will talk about exactly why I'm doing this," Rodger wrote.

In the final video posted Friday, he sits in a black BMW in sunset light and appears to be acting out scripted lines and planned laughs.

"I'll take great pleasure in slaughtering all of you," the son of a Hollywood director who worked on "The Hunger Games" says.

In his videos and writings, Rodger voices his contempt for everyone from his roommates to the human race, reserving special hate for two groups: the women he says kept him a virgin for all of his 22 years and the men they chose instead.

The rampage played out largely as he sketched it in public postings. He said he would start by "silently killing as many people as I can around Isla Vista by luring them into my apartment through some form of trickery." He said he would knock them out with a hammer, and slit their throats.

On Sunday, the sheriff's office identified the final victims as Cheng Yuan Hong, 20, and George Chen, 19 - both from San Jose - and Weihan Wang, 20, of Fremont. Hong and Chen were listed on the lease as Rodger's roommates. Investigators were trying to determine whether Wang was a roommate or was visiting the apartment.

Around 9:30 p.m., the shooting rampage began and lasted about 10 minutes.

In the end, he shot and killed three others at random, and injured 13 more either with gunshots or the BMW that he used as a battering ram against bicyclists and skateboarders.

Deputies found three semi-automatic handguns along with 400 unspent rounds in the car. All were purchased legally.

Sheriff Brown said: "During the course of his interaction with mental health professionals, he apparently had never been either institutionalized or committed for an involuntarily hold of any kind. And those are the two triggers that actually would have made him a prohibited person in terms of a fire arms purchase. So he was able, sadly, to obtain those three firearms."