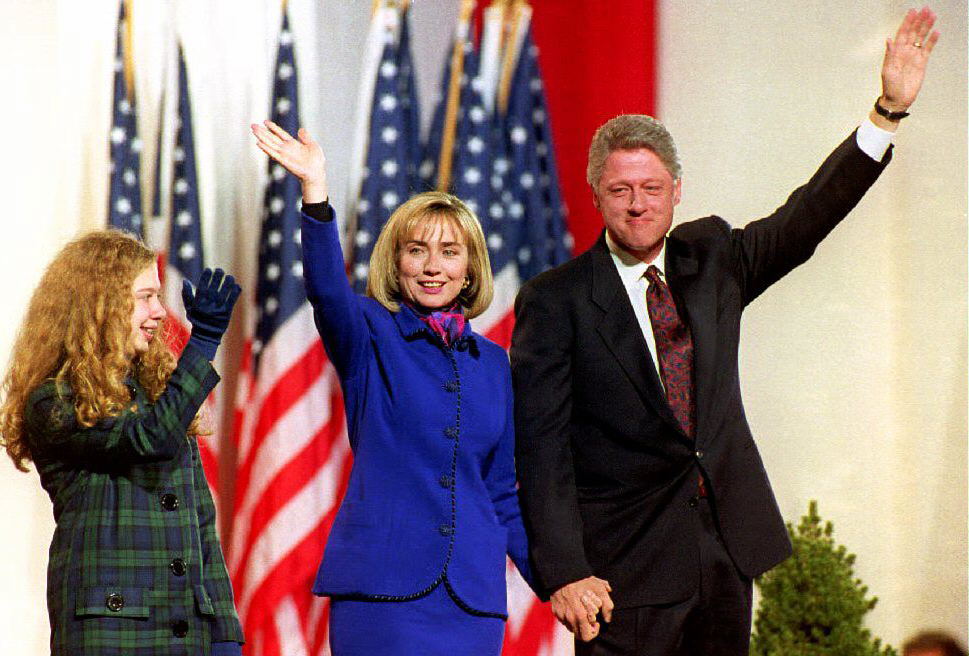 Donald Trump posted a new video to his Instagram account this week. In the video, a young Bill Clinton smoked a cigar, and Hillary Clinton laughed over audio of Juanita Broaddrick and Kathleen Willey accusing Bill Clinton of sexual misconduct. "Here we go again?" the video asked, as Clinton's laughter echoed.

Trump, in his quest to land hits against Clinton on the campaign trail, is dredging up every possible scandal from the William Jefferson Clinton White House years and before--a move that may fire up the Republican base, but might not resonate with the rest of the electorate.

At the very least, it signals nothing is off-limits for the presumptive GOP nominee, whose recent comments indicate he'll use whatever he feels he needs to against Clinton.

"We're in a different era--Donald Trump is rewriting the rules and, as we have seen, if it is salacious enough to print in the [National] Enquirer, then it meets his standards," said Mo Elleithee, the director of the Georgetown Institute of Politics and Public Service, and a former spokesman for Clinton's 2008 campaign. "So anything goes, clearly, in the world according to Trump."

Trump has indicated in interviews that he's just retaliating for "nasty" things the Clintons have said about him, saying he will "play at whatever level" he needs to.

"They said things about me which were very nasty. And I don't want to play that game at all. I don't want to play it -- at all. But they said things about me that were very nasty," Trump told the Washington Post in a recent interview. "And, you know, as long as they do that, you know, I will play at whatever level I have to play at. I think I've proven that."

The references are frequent and varied. Trump has been making insinuations about Bill Clinton for a long time, while calling Hillary Clinton an "enabler" for her husband's sexual misconduct. Trump has even used the word "rape" to refer to Clinton's interactions with several women who have made allegations against him.

In an accidentally leaked email from Trump spokeswoman Hope Hicks to the Republican National Committee Wednesday, first obtained by Politico, Hicks asked for research on the Whitewater scandal, which refers to the Clintons' real estate investment deal in the 1970s that was later investigated by Congress and the Justice Department.

Hicks asked the RNC aide to "work up information on HRC/Whitewater as soon as possible." "This is for immediate use and for the afternoon talking points process," she wrote.

Perhaps the most salacious of them all was his offhand reference to the 1993 death of Vince Foster, a close aide to the Clintons, which was ruled a suicide at the time. Over the years, conspiracy theorists have long questioned whether Foster's death was somehow connected to the Clintons and knowing too many of their secrets.

Foster's death was "very fishy," Trump told the Washington Post, and suggested the theories could be true--saying he didn't know enough about the circumstances, but said just enough to lend credence to the theories.

"I don't bring [Foster's death] up because I don't know enough to really discuss it," he said. "I will say there are people who continue to bring it up because they think it was absolutely a murder. I don't do that because I don't think it's fair."

Based on his own comments, Trump seems to believe that if the things that are being discussed in his own past--his comments about women over the years, for example, or reports that he posed as his own spokesman in the 1990s--are considered fair game, the Clintons' past should be considered equally so.

"When was this? Twenty-five years ago? Wow, you mean you're going so low as to talk about something that took place 25 years ago," Trump said recently when asked about the publicist stories.

The references to the Clintons scandals of the 90s aren't exactly new: Republicans have been bringing them up since before Clinton even entered the race last April. But for the most part, Republicans mentioned the "Clinton scandals" in the abstract--and as a way to indicate that questions about her private email server and foreign donations to the Clinton Foundation were just more of the same.

Moreover, there's plenty of controversy involving Hillary Clinton in the present: just Wednesday, a State Department audit chastised Clinton for her use of a private email server during her four years at State. And Republicans have long used the Benghazi attacks of fall 2012 against Clinton, holding her responsible for the deaths of four Americans there.

Trump has certainly paid attention to Benghazi and Clinton's emails--he mentioned her emails at an event Wednesday--but has put his focus squarely on the 1990s. All of that, in Trump's estimation, adds up to a history of scandal that contributes to his nickname for Clinton, "Crooked Hillary."

Clinton, meanwhile, has shrugged off the attacks. In an interview with CNN last week, Clinton declined to respond to some of Trump's most recent attacks on her husband's history: "I know that that's exactly what he is fishing for, and you know, I'm not going to be responding," she said.

And Bill Clinton, too, has opted not to take the bait. Asked at a recent campaign stop in Puerto Rico about Trump's claim that he is "the WORST abuser of women in U.S. political history," Clinton responded: "No, I won't. I think people are smart enough to figure this out without my help."