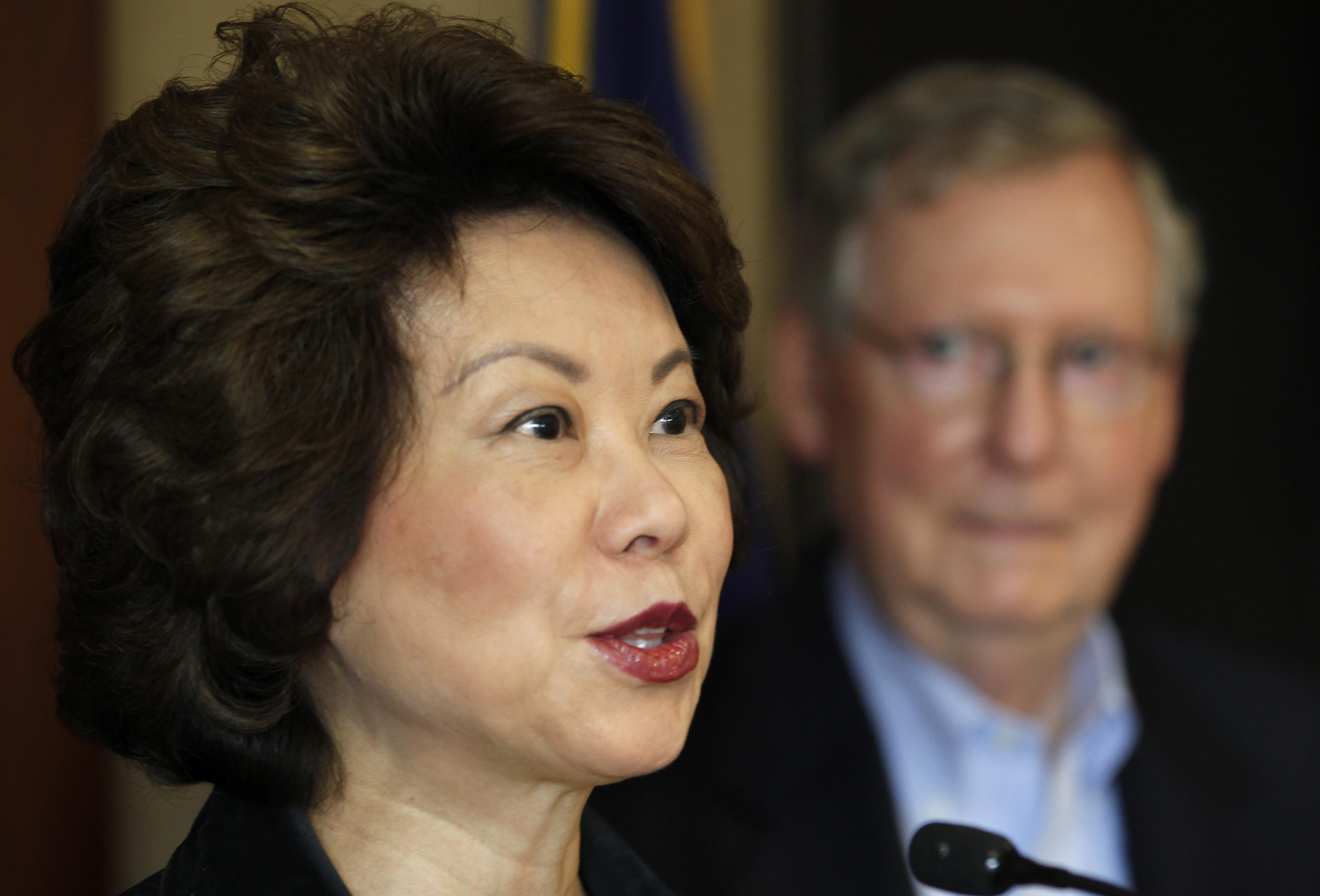 DUBAI, United Arab Emirates -- An official in U.S. President Donald Trump’s Cabinet and at least one of his advisers gave paid speeches for organizations linked to an Iranian exile group that killed Americans before the 1979 Islamic Revolution, ran donation scams and saw its members set themselves on fire over the arrest of their leader.

Elaine Chao, confirmed this week as Mr. Trump’s transportation secretary, received $50,000 in 2015 for a five-minute speech to the political wing of the Mujahedeen-e-Khalq, previously called a “cult-like” terrorist group by the State Department. Former New York Mayor Rudy Giuliani also was paid an unknown sum to talk to the group, known as the MEK.

More than two dozen former U.S. officials, both Republican and Democratic, have spoken before the MEK, including former House Speaker and Trump adviser Newt Gingrich. Some have publicly acknowledged being paid, but others have not.

While nothing would have prohibited the paid speeches, they raise questions about what influence the exiles may have in the new administration.

Already, a group of former U.S. officials, including Giuliani, wrote a letter to Trump last month encouraging him to “establish a dialogue” with the MEK’s political arm.

With Trump’s ban on Iranians entering the U.S. (currently blocked by federal courts), his administration’s call this week to put Iran “on notice” and the imposition of new sanctions on Friday, the exile group may find his administration more welcoming than any before.

A potential alliance with the MEK would link the U.S. to a group with a controversial history that has gone against American interests in the past by supporting Iran’s Islamic Revolution and the U.S. Embassy takeover in Tehran. After fleeing Iran, the MEK joined forces with Iraqi dictator Saddam Hussein. It later exposed details of the clandestine nuclear program run by Iran, which views the MEK as its sworn enemy.

“The Mujahedeen have backed the winning horse. They are going to have some at least entree into the administration,” said Ervand Abrahamian, a professor at the City University of New York who wrote a book on the MEK. “I think it weakens the U.S. because the more they have access to the administration, the more people in Iran are going to be scared of anything the U.S. does.”

The MEK long has cultivated a roster of former U.S. and European officials to attend its events opposing Iran’s clerically run government. It pays for the appearance of many.

Chao, the wife of Senate Majority Leader Mitch McConnell of Kentucky, spoke before an MEK conference in 2015 in Paris. She also had a seat next to Maryam Rajavi, the “president-elect” of the National Council of Resistance of Iran, the political arm of the MEK.

Chao received a $50,000 honorarium from the MEK-associated Alliance for Public Awareness, according to a report she filed with the U.S. Office of Government Ethics. Chao received another $17,500 honorarium for March 2016 speech she gave to the Iranian-American Cultural Association of Missouri, which MEK opponents also link to the exile group.

The Department of Transportation said in a statement that Chao has a “strong record of speaking out in support of democracy and women’s rights in the Middle East,” but “has not spoken to MEK events.”

It added that her speeches were delivered alongside bipartisan members of Congress, governors, prime ministers, ambassadors, generals, former FBI Directors and “many other influential voices.”

Giuliani has acknowledged being paid for his appearances at MEK events. However, he hasn’t filed a government disclosure form since his failed 2008 Republican presidential bid, so it’s unclear how much the MEK has paid him in total. Giuliani did not respond to an AP request for comment sent through his aides.

Gingrich has also spoken to the MEK before, including at a gala in 2016, although it is not clear whether or how much he was paid. Gingrich could not be reached for comment. The White House also did not comment.

The MEK welcomes the incoming Trump government, as “some people within this administration” plan to change American policies toward Iran, said Mohammad Mohaddessin, the chairman of the foreign affairs committee of its political arm.

“The core of the policy that we are advocating is to be tough with the Iranian regime, to not ignore its crimes against the Iranian people,” he said.

The MEK formed in 1965. They embraced both Marxism and the idea of an Islamic government after the violent overthrow of the American-backed shah who ruled Iran at the time. Their name, Mujahedeen-e-Khalq, means “the People’s Holy Warriors.”

They carried out a string of targeted assassinations hitting Iranian officials, as well as Americans. However, the MEK today blames a Marxist splinter faction of the group for killing the Americans.

The MEK fled Iran and later found refuge from Iraqi dictator Saddam Hussein. Heavily armed by Saddam, MEK forces launched cross-border raids into Iran during its with war with Iraq, further alienating the group from average Iranians. The MEK says it renounced violence in 2001. A couple years later, President Obama removed the group from the State Department list of terrorist organizations.

The State Department has described the MEK as having “cult-like characteristics.” When French police arrested Rajavi in 2003 as part of a terrorism investigation, MEK members responded by lighting themselves. At least two people died.

Over the years, the MEK has said their organization receives money from Iranians to fund their operations. However, the group has been targeted by a series of investigations around the world for running charity scams.

Mohaddessin blames the investigations on a concerted misinformation campaign carried out by Iran.

The MEK’s success in getting former U.S. officials behind them could be seen in a letter dated Jan. 9 sent to Trump just before his inauguration.

“We repeat the call for the U.S. government to establish a dialogue with Iran’s exile resistance,” read the letter signed by Giuliani and others.

Whether Trump’s administration forms closer ties to the MEK is yet to be seen. However, exile groups haven’t always been proven to be reliable American allies in the Middle East. Exiled politician Ahmad Chalabi heavily lobbied the administration of President George W. Bush to invade Iraq by pushing false allegations of weapons of mass destruction and links to al-Qaida.

Iran’s mission to the United Nations did not respond to a request for comment.

But while the MEK continues to pay former U.S. officials for their time, the family of the American lieutenant colonel killed in Iran in 1975 has filed a $35 million federal lawsuit in Colorado against the group and Iran.