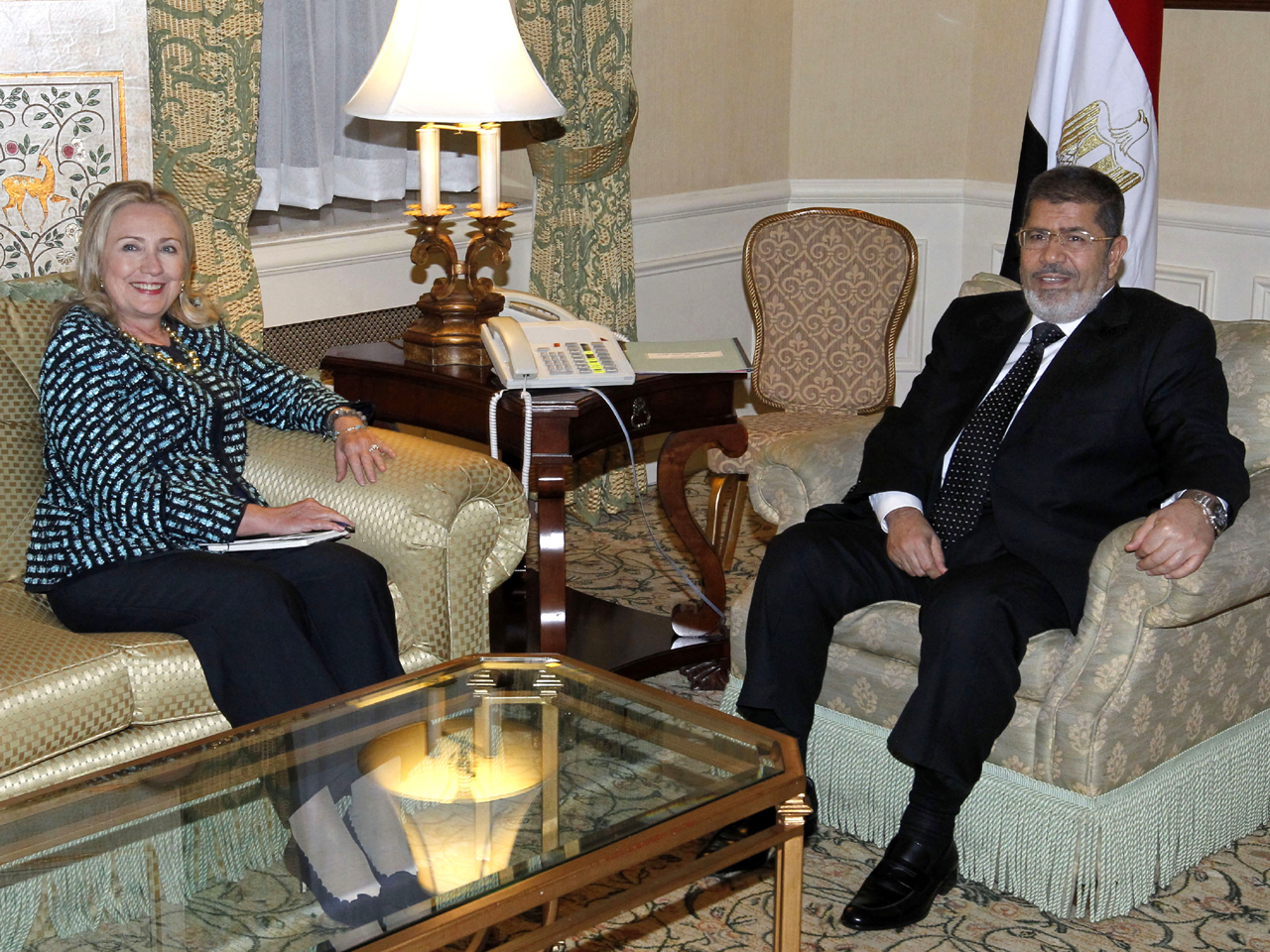 (AP) NEW YORK - The United States and Egypt sought Monday to repair ties strained severely by a year-and-a-half of rapid change in the Middle East, culminating in the last two weeks with Egyptian demonstrators overrunning the U.S. Embassy in Cairo and President Barack Obama candidly remarking that the two countries were now neither enemies nor allies.

Secretary of State Hillary Rodham Clinton spoke with Egypt's new Islamist president, Mohammed Morsi, in a New York hotel on Monday night, the highest-level meeting between the once stalwart Middle East partners since an American-made video ridiculing Islam prompted violent Egyptian protests on the anniversary of the Sept. 11 terrorist attacks. American officials said their discussions sought to strengthen a relationship that both see as vital.

They particularly emphasized the importance of ensuring the security of diplomatic installations, said a senior U.S. official, who wasn't authorized to speak publicly about the private meeting and requested anonymity. Morsi was criticized for his slow, initial response to the protests that ended with vandalism of the embassy and the American flag torn down, but the official stressed that U.S. officials see the Egyptian government's protection since as reassuring.

The meeting occurred amid a jam-packed schedule for Clinton in New York, where she is attending this week's annual gathering of the U.N. General Assembly and speaking with a host of world leaders. Egyptian hopes of a maiden meeting between Morsi and Obama were dashed when the White House announced that the president would not be participating in bilateral meetings during his brief stay in the city. Obama arrived Monday and will leave Tuesday.

Shortly after the Cairo protests, Obama appeared to express his dismay with Egypt's handling of the situation. In an interview with Spanish-language network Telemundo, he said: "I don't think that we would consider them an ally, but we don't consider them an enemy."

The nature of the U.S.-Egyptian relationship wasn't under question in Clinton's meeting with Morsi, said the U.S. official, who said that officials for the two countries see relations as having have moved past the place they were only 12 days ago.

Clinton and Morsi also spoke about improving security in the Sinai Peninsula near Israel's border and helping the Egyptian economy, officials said.

Extremist activity has grown in the Sinai since last year's political upheaval, which ended with the ouster of longtime U.S. ally Hosni Mubarak. The volatile region, which links Egypt's borders with the Gaza Strip and Israel, has become increasingly lawless. In a brazen attack in August, unidentified militants killed 16 Egyptian soldiers.

Clinton stressed the need for Egypt to improve communications with its neighbor Israel, the official said.

The neighbors established a close counterterrorism partnership under Mubarak, but relations have dipped since. Members of Morsi's Muslim Brotherhood have expressed skepticism about the merits of Egypt's three-decade old peace treaty with Israel, and the Jewish state has viewed with great suspicion the political rise of Morsi and other hardline Islamists.