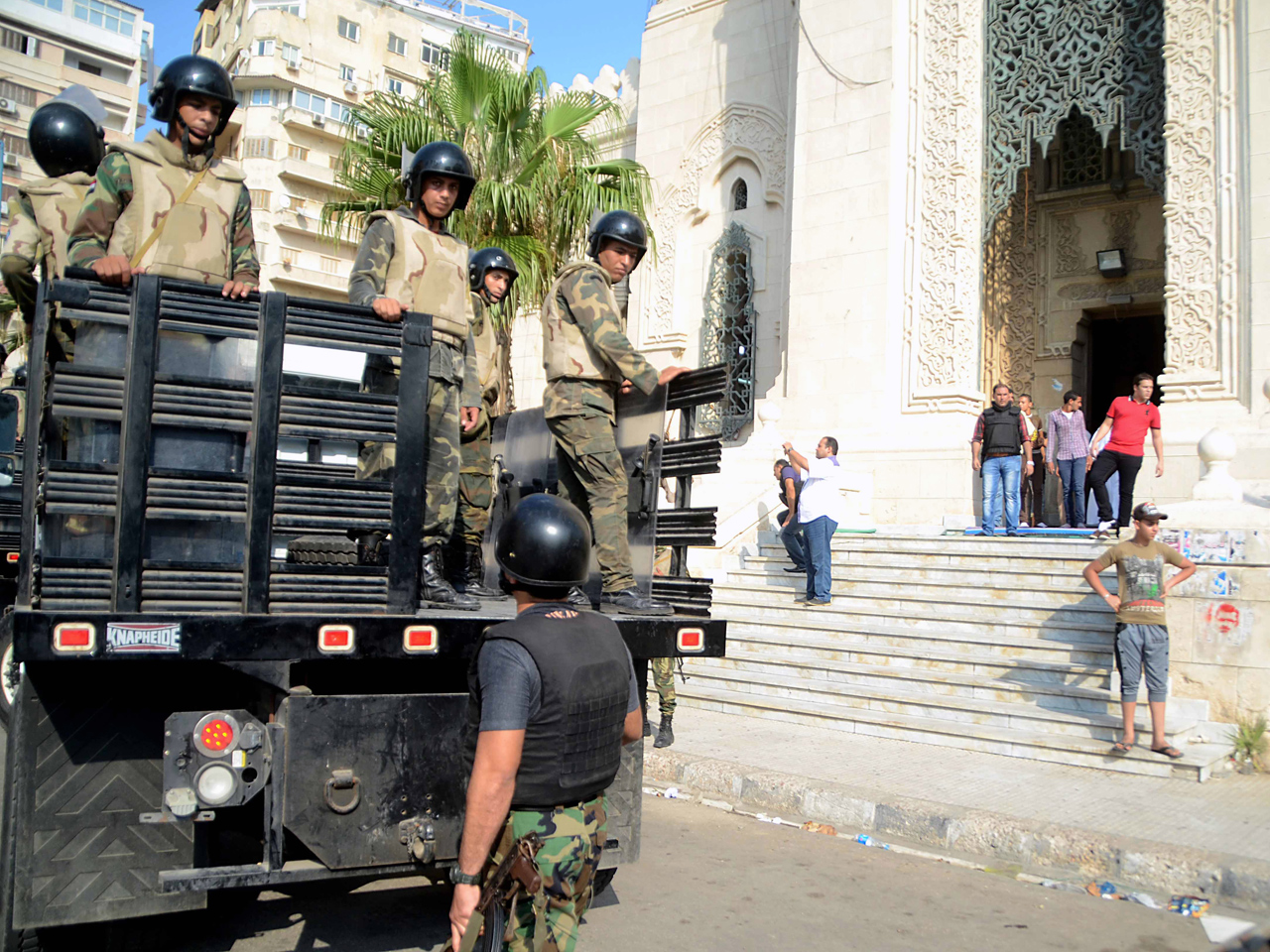 Defense Minister Gen. Abdel-Fatah el-Sissi, who led the July 3 coup that toppled President Mohammed Morsi, again said the army has no intention of seizing power in the Arab world's most populous country. El-Sissi removed Morsi after four days of mass rallies by millions of Egyptians who demanded the president step down.

Meanwhile, at least 36 people detained on suspicion of taking part in the street clashes were killed Sunday when security forces fired tear gas inside of the prison truck holding them, security officials said. Those killed were part of a prison truck convoy of some 600 detainees heading to Abu Zaabal prison in northern Egypt, the officials told The Associated Press. Detainees in one of the trucks rioted and managed to capture a police officer inside, the officials said.

Security forces fired tear gas into the truck in hopes of freeing the badly beaten officer inside, the officials said. The officials said those killed died from suffocating on the gas. The officials spoke on condition of anonymity because they were not authorized to speak to journalists.

However, the officials' version of events contradicted reports about the incident carried by state media. The official website of Egyptian state television reported that the deaths took place after security forces clashed with militants near the prison and detainees came under fire while trying to escape. The official MENA state news agency also said the trucks came under attack from gunmen.

The differences in the accounts could not be immediately reconciled Sunday night.

That raised the death toll for four days of unrest across the country to 924 people killed.

On Saturday alone, clashes between Morsi supporters and police killed 79 people, according to a government tally released Sunday and carried by Egypt's official MENA news agency.

"We will not stand by silently watching the destruction of the country and the people or the torching the nation and terrorizing the citizens," el-Sissi said in a speech aired on state television.

The general said that the military didn't seek power but instead "have the honor to protect the people's will — which is much dearer (than) ruling Egypt."

El-Sissi also said Islamists must be included in the country's politics moving forward. A military timetable calls for the nation's constitution to be amended and for presidential and parliamentary elections to be held in 2014.

"We have given many chances ... to end the crisis peacefully and call for the followers of the former regime to participate in rebuilding the democratic track and integrate in the political process and the future map instead of confrontations and destroying the Egyptian state," he told a gathering of top military commanders and police chiefs.

El-Sissi's remarks come ahead of an anticipated harsher stance by the military-backed government toward the Brotherhood. The Cabinet held an emergency meeting Sunday to discuss potentially banning the group, a long-outlawed organization that swept to power in the country's first democratic elections a year ago.

A possible ban — which authorities say would be implemented over the group's use of violence — would be a repeat of the decades-long struggle between the state and the Brotherhood. It also would drain the group's financial resources and allow for mass arrests of its members.

The hard-line stance of Egypt's military against the Brotherhood has led to much condemnation in the West from many that have previously been wary of the Islamist group's motives.

Should the decades-old power struggle between the military and the Brotherhood reach that point again where a ban is called for, the Brotherhood will go underground and al Qaeda will come to their aid, Graham said. The Brotherhood is a "force" in the streets, he said, but "if you had new elections the Brotherhood would get creamed."

Meanwhile, the government can't expect to jail the 25 percent to 30 percent of Egyptians who back the Muslim Brotherhood, Graham said, adding "the Egyptian people are not terrorists."

Egyptian authorities on Saturday said theyarrested Mohammed al-Zawahri, leader of the ultraconservative Jihadi Salafist group and the brother of an al Qaeda leader, who has been allied with Morsi and the Muslim Brotherhood.

The Brotherhood has shown no signs of backing down.

Under the banner of an anti-coup alliance, the group held protests Sunday, though a planned demonstration in front of the Supreme Constitutional Court in southern Cairo appeared to fizzle out.

Unrest has swept Egypt since Wednesday's dismantling of two encampments of Morsi supporters in Cairo. Some 70 police officers were killed in clashes with protesters or retaliatory attacks during the same period, according to the Interior Ministry.

In an attempt to cripple the Brotherhood's protest plans, authorities carried out raids early Sunday morning, detaining at least 300 mid-level officials and field operatives in several cities, according to security officials and group statements.

In Egypt's second-largest city Alexandria, the Brotherhood said on its official website that security forces stormed houses of 34 officials and former lawmakers, but only arrested seven people. Among those targeted was Medhat el-Haddad, the brother of top Morsi's aide Essam el-Haddad.

In Assiut, 200 miles south of Cairo, 163 of the group's officials and operatives were rounded up in different towns in the province, security officials said. They said those arrested face charges of instigating violence and orchestrating attacks on police stations and churches.

In the city of Suez, nine people were arrested after being caught on film attacking army vehicles, burning churches and assaulting Christian-owned stores, officials said.

The officials spoke on condition of anonymity as they were not authorized to speak publicly to journalists.

"The scenes of violence will not grant you any rights and the bloodshed nor chaos spreading across the country will give you no legitimacy," el-Tayeb said.

The violence in Egypt also has sparked deep concerns worldwide.

In a joint statement Sunday, the presidents of the European Commission and the European Council said it was the responsibility of the army and the interim government to end the violence, warning against the use of force. They said EU will "urgently review in the coming days its relations with Egypt" — meaning much-need financial aid could be on the line.

"We regret deeply that international efforts and proposals for building bridges and establishing an inclusive political process ... were set aside and a course of confrontation was instead pursued," the statement by Jose Manuel Barroso and Herman Van Rompuy read.

They warned: "This path will not succeed."

Nearly two weeks of international diplomacy by the EU, U.S. and Arab nations failed to broker a peaceful end to the standoff. Lawmakers in the U.S. expressed greater discontent Sunday with Egypt — and concern about $1.3 billion in annual military aid it gives the Arab nation.

Egypt also lost one of the few doves in the country's military-backed administration as Mohamed ElBaradei, who resigned as vice president in protest of the use of force against Morsi's supporters, left Cairo for Vienna on Sunday. ElBaradei declined to speak to journalists as he left Egypt, where pro-military news outlets have become increasingly hostile toward him.