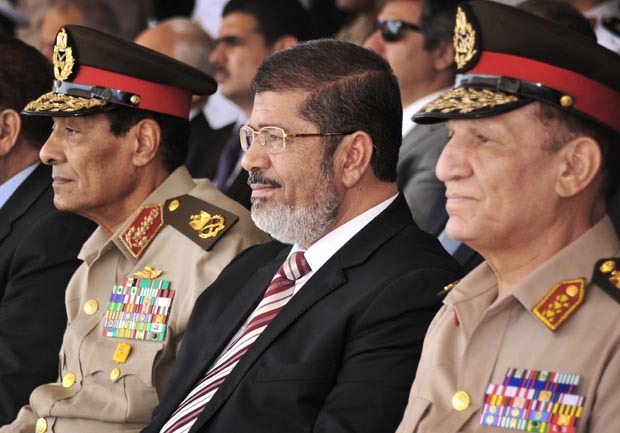 (AP) CAIRO - Egypt's Islamist president ordered the retirement of the defense minister and chief of staff on Sunday and made the boldest move so far to seize back powers that the military stripped from his office right before he took over.

It was not immediately clear whether President Mohammed Morsi's surprise decisions had the military's blessing. But the appointment of outgoing Defense Minister Field Marshal Hussein Tantawi and Chief of Staff Gen. Sami Annan as presidential advisers suggested that the nation's top two soldiers may have agreed, perhaps reluctantly, in advance. Morsi awarded them two of the country's highest honors.

Adding to the sweeping changes in the military leadership, the president also ordered the retirement of the commanders of the navy, air defense and air force, but named two of them to senior positions. He appointed a senior judge, Mahmoud Mekki, as vice president. Mekki is a pro-reform judge who publicly spoke against election fraud during Hosni Mubarak's 29-year rule before he was ousted in last year's uprising.

Hours after announcing the shake-up, a confident looking Morsi appeared at a religious ceremony to hand monetary awards to young Muslims from Egypt and elsewhere who have learned the Quran, Islam's holy book, by heart. Thousands of jubilant Morsi supporters, meanwhile, gathered at night to celebrate in Tahrir Square, birthplace of the uprising that ousted Mubarak 18 months ago. Another crowd of supporters formed outside the presidential palace in Cairo's suburb of Heliopolis.

Mohammed Aboul-Ghar, a founder of the new Egyptian Social Democratic Party — a secular group critical of the military as well as Morsi's Muslim Brotherhood — said the power struggle has now been settled in Morsi's favor.

Morsi, a U.S.-educated engineer, has been intensely seeking to assert his authority in the face of the powerful military. On Wednesday, he fired the nation's intelligence chief after militants killed 16 Egyptian soldiers along the border with Israel in Sinai. He was sacked after it was disclosed in the Egyptian media that he failed to act on an Israeli warning that an attack was imminent in the Sinai peninsula.

Egypt's first democratically elected president and the first who does not hail from the military, Morsi has since the Aug. 5 attack on the soldiers made two visits to Sinai in the company of top commanders, chaired several meetings with the armed forces' top brass and made a point of calling himself the supreme commander of the armed forces during televised speeches.

The Muslim Brotherhood won both parliamentary and presidential elections in the first free and fair votes in Egypt's modern history. The group had been repressed under Mubarak, who ran a secular state.

The Supreme Council of the Armed Forces (SCAF), which ruled Egypt for 17 months, stripped the presidency of many of its key powers before it handed the reins of office to Morsi on June 30. Tantawi was the head (SCAF) and Annan was No. 2 on the ruling council.

The two men appointed to replace them were also members of the SCAF — something that could indicate either the military's agreement to the shuffle or splits at the highest level of the armed forces.

With Sunday's moves, Morsi restored to his office the powers taken from him, taking back control of the constitution drafting process and the right to legislate.

He decided that if the 100-member panel currently drafting the document did not finish its work for whatever reason, he will appoint a new one within 15 days and give it three weeks to finish its work. The draft will then be put to a vote in a national referendum within 30 days. Parliamentary elections will follow if the draft is adopted.

His decisions were announced at a time of day when life in Egypt grinds to a halt as Muslims prepare to eat the sunset meal that breaks the 15-hour, dawn-to-dusk fast every day in the holy month of Ramadan.

"The question is now will these decisions end that conflict and the duality of powers or will there be resistance?" said analyst Gamal Abdel-Gawad. "These are huge changes."

Morsi was able to take the higher moral ground since taking office as an elected leader, while Tantawi and his generals on the SCAF continued to be vilified by rights groups for mismanaging the transitional period and accused of human rights violations, such as killing protesters, torturing detainees and hauling before military tribunals at least 12,000 civilians.

El-Sissi and Mekki were sworn in shortly after the announcement.

The outgoing navy commander, Lt. Gen. Mohab Mameesh, was named executive chairman of the Suez Canal, the strategic waterway linking the Red Sea and the Mediterranean and a major source of revenues for the country.