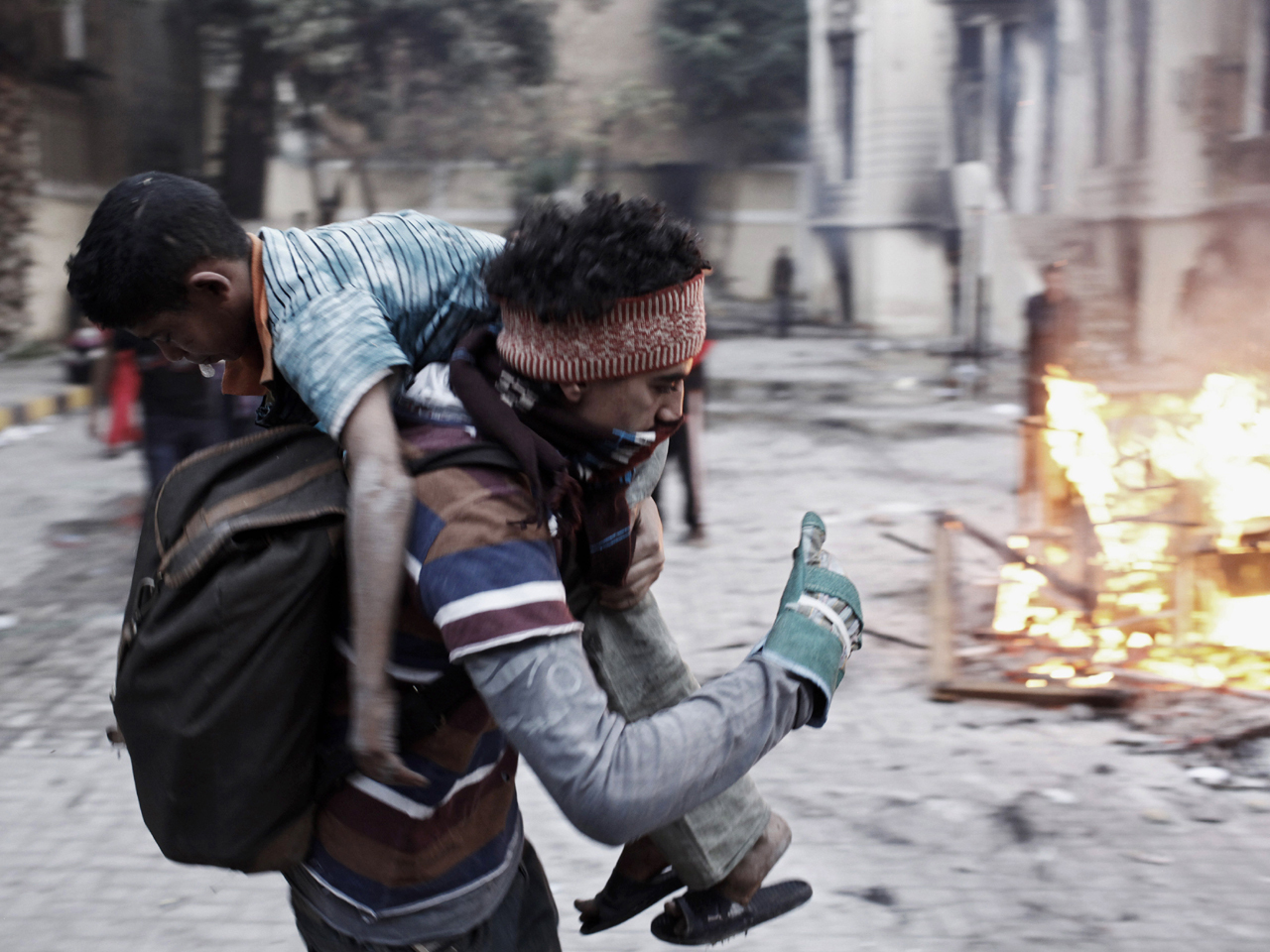 CAIRO Relatives and angry young men rampaged through the Egyptian city of Port Said on Saturday in assaults that killed at least 27 people following death sentences for local fans involved in the country's worst bout of soccer violence.

Unrest surrounding the second anniversary of Egypt's revolution also broke out in Cairo and other cities for a third day, with protesters clashing for hours with riot police who fired tear gas that encompassed swaths of the capital's downtown.

The divisive verdict and bloodshed highlight challenges being faced by President Mohammed Morsi, who took office seven months ago following an Egyptian revolution that ousted autocratic leader Hosni Mubarak. Critics say Morsi has failed to carry out promised reforms in the country's judiciary and police force, and claim little has improved in the two years after the uprising against Mubarak.

The Islamist leader, Egypt's first freely elected and civilian president, met for the first time with top generals as part of the newly formed National Defense Council to discuss the deployment of troops in two cities. The military was deployed to Port Said hours after the verdict was announced, and warned that a curfew could be declared in areas of unrest. The military was also deployed to the canal city of Suez, where protesters attacked the main security compound there after eight people were killed late Friday.

Saturday's riot in Port Said stemmed from animosity between police and die-hard soccer fans know as Ultras, who also were part of the mass uprising against Mubarak that began on Jan. 25, 2011, and at forefront of protests against the military rulers who assumed temporary power after his ouster.

It also reflected tensions after the uprising that reached into all sectors of Egyptian life, even sports.

Others say, at the very least, police were responsible for gross negligence in the Feb. 1 soccer brawl that killed 74 Al-Ahly fans.

Anger at police was evident in Port Said, home to most of the 73 men accused of involvement in the bloodshed, although the trial was held outside Cairo.

Judge Sobhi Abdel-Maguid did not give his reasoning when he handed down the sentences for 21 defendants. Executions in Egypt are usually carried out by hanging.

Verdicts for the remaining 52 defendants, including nine security officials, are scheduled to be delivered March 9. Some have been charged with murder and others with assisting the attackers. All the defendants — who were not present in the courtroom Saturday for security reasons — can appeal the verdict.

Supporters of those sentenced to death said they were being used as scapegoats. The rioters attacked the city's prison after the verdict was read live on state television to try and free the defendants. A police lieutenant and police officer were killed in the assault.

Residents also focused their anger against the government, attacking a power station, the governor's office and local courthouse. They staged a sit-in along the main road leading into the city and occupied a police station.

Security officials said a total of 27 people were killed and some 400 wounded, many by gunfire, throughout the city. The officials spoke on condition of anonymity because they weren't authorized to release the information.

Victims were killed when police fired tear gas, bird shot and other live ammunition at the mob. Two soccer players who died- one from Port Said's Al-Marikh club and the other a former player of its Al-Masry club — apparently were killed on their way to do training near the prison. One of the players was shot three times, a local health official said.

Some 220 kilometers (135 miles) away in Cairo, the divisive nature of the trial was on display.

Relatives of those killed at the soccer game erupted in joy in the courtroom after the verdict was announced.

Families yelled "Allahu Akbar!" Arabic for "God is great" and pumped their fists in the air. Others held up pictures of the deceased, most of whom were young men from Cairo's poor neighborhoods. One man fainted while others hugged. The judge smacked the bench several times to try to restore calm.

Supporters of Cairo's Al-Ahly celebrated the verdict in the team's club before heading toward Interior Ministry headquarters, which manages the police, for more protests.

Lawmakers had formed a fact-finding committee that found some evidence toward collusion from authorities, but the evidence was not conclusive.

Nine of those on trial are security officials, charged with assisting the attackers for failing to search for weapons as is customary and allowing known criminals to attend the game. One was a senior officer who locked the exit designated for Al-Ahly fans. Many victims suffocated or were trampled to death in the corridor trying to escape the violence. Others were thrown off bleachers, undressed, beaten with iron bars and had the words "Port Said" carved into their skin.

Police reform researcher Karim Ennarah said the lack of a proper investigation raises the specter that some of those on trial are innocent. The state prosecutor's office, tasked with investigating the case, was long run by a Mubarak holdover.

"We still operate in a state that doesn't hold its employees, specifically in the security sector, to account," Ennarah said. "There might have been democratic elections, but it still is a very undemocratic state in terms of how police work."

The most high profile case since Egypt's uprising was that of Mubarak himself. He was found guilty of failing to stop the killing of around 900 protesters. The verdict angered people who wanted him executed on charges of ordering deadly force. He was sentenced to life in prison in what even some of his opponents argue was a verdict based on flimsy evidence aimed at appeasing an angry public.

A lawyer of one of the defendants given a death sentence Saturday said this verdict too was political.

Days before the verdict, Morsi declared the victims "martyrs of the revolution", granting families up to $15,000 in compensation.

"There is nothing to say these people did anything and we don't understand what this verdict is based on," Mohammed al-Daw told The Associated Press by telephone.

"Our situation in Port Said is very grave because kids were taken from their homes for wearing green T-shirts," he said, referring to the Al-Masry team color.

The president, once a detainee under Mubarak for his political activities with the Brotherhood, had vowed to restore security in his first 100 days in office. Instead, critics say he has waged a personal campaign against anti-Brotherhood figures rather than carry out comprehensive reform.

His Muslim Brotherhood allies blamed "misleading" media outlets for enflaming the public against the government. The main opposition bloc said it holds Morsi responsible for "the excessive use of force by the security forces against protesters."

Fans of Al-Ahly, mostly young men in their teens, promised more violence in the days leading up to the verdict if the death penalty was not handed down. Their main Facebook page had called for bloodshed.

"This was necessary," said Nour al-Sabah, whose 17-year-old son Ahmed Zakaria died in last year's melee. "Now I want to see the guys when they are executed with my own eyes, just as they saw the murder of my son."

"We are not really that happy," Mohamed Ahmed, a survivor of the attack, said. "The government helped the Ultras of Port Said by blocking the gates of the stadium until people suffocated to death."

Meanwhile, Port Said resident and activist Rasha Hammouda said the city wants those involved in killings to be brought to justice.

"We have no problem with execution of those who killed, but bring everyone who is involved," she said.