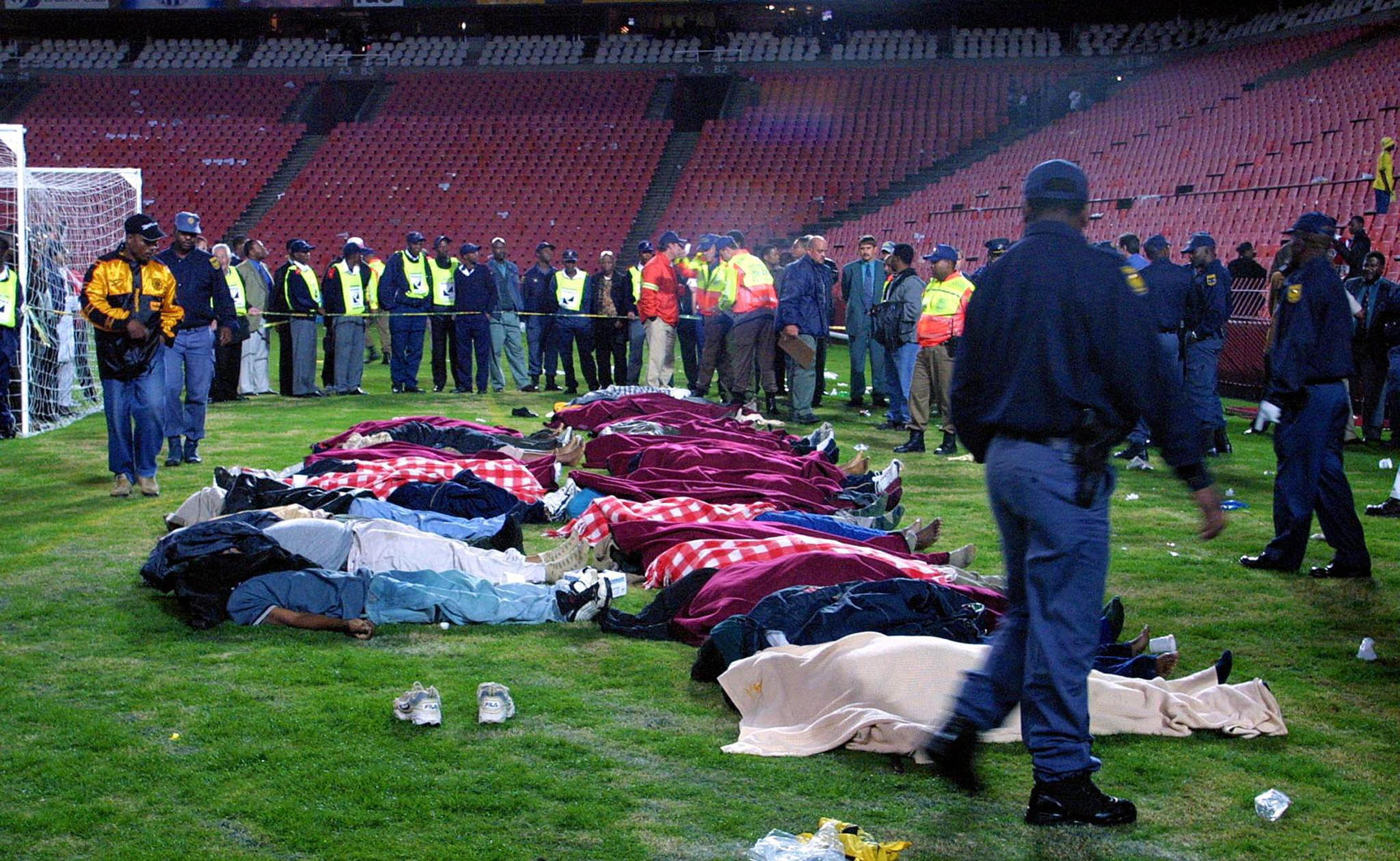 Here is a list of other fatal disasters at soccer stadiums around the world.

April 5, 1902 — Glasgow, Scotland; 25 killed and 517 injured when the West Stand at Ibrox Park collapses during an international between England and Scotland. The game ends in a 1-1 draw but is later stricken from official records.

March 9, 1946 — Bolton, England; 33 people are killed and over 400 injured when a wall collapses at Burden Park before an English FA Cup match between Bolton Wanderers and Stoke City. The collapse crushes fans together and sparks a stampede.

March 30, 1955 — Santiago, Chile; Six died when 70,000 tried to jam into the stadium for the finals of the South American soccer tournament. Argentina beat Chile 1-0.

May 24, 1964 — Lima, Peru; 318 people are killed and another 500 injured in riots at National Stadium after Argentina beats Peru in an Olympic qualifying match. The pandemonium breaks out when the referee disallows a Peruvian goal in the final two minutes.

June 23, 1968 — Buenos Aires, Argentina; 74 people are killed and over 150 injured following a first-division game between River Plate and Boca Juniors when fans trying to leave the stadium mistakenly head toward a closed exit and are crushed against the doors by other fans unaware of the closed passageway.

Jan. 2, 1971 — Glasgow, Scotland; 66 people are killed and 140 are injured when barriers in Ibrox Stadium collapse near the end of a match between Celtic and Rangers and fans are crushed. The incident occurs when fans leaving the stadium are met by a group trying to return after hearing that Rangers had scored an equalizer.

Feb. 17, 1974 — Cairo, Egypt; Crowds attempting to enter a club game broke down barriers and 49 people were trampled to death.

Oct. 31, 1976 — Yaounde, Cameroon; After a penalty kick was awarded to Cameroon in a World Cup qualifying match vs. the Congo, the Congolese goalie attacked the Gambian referee. A fight broke out and the president of Cameroon, watching the game at home on television, sent in paratroopers by helicopter. Two bystanders died.

Dec. 6, 1976 — Port-au-Prince, Haiti; At a World Cup qualifier between Haiti and Cuba, the visitors scored and a Haitian fan set off a firecracker. Fans thought it was gunfire and panicked, knocking down a soldier, whose gun went off and killed a small boy and girl in the crowd. Further panic caused two people to be trampled to death, and one man died jumping over a wall. The soldier committed suicide.

Oct. 20, 1982 — Moscow; 340 are reportedly killed at a European Cup match between Soviet club Spartak Moscow and Haarlem of the Netherlands. Police are blamed for pushing fans down a narrow, icy staircase before the end of the match. When a late goal is scored, exiting fans try to re-enter the stadium and create a "human mincer." Moscow officials dispute the claims made in the publication of the Soviet Sports Committee, saying only 61 died and police did not push fans.

May 11, 1985 — Bradford, England; 56 people die when a cigarette stub ignites a stadium's wooden terrace section and fire engulfs the structure.

May 29, 1985 — Brussels, Belgium; 39 people are killed at the European Champions Cup Final at Heysel Stadium when riots break out and a wall separating rival fans of England's Liverpool and Italy's Juventus of Turin collapses.

March 10, 1987 — Tripoli, Libya; 20 people are killed when panic-stricken fans flee knife-wielding ruffians and trigger the collapse of a wall. (This report conflicted with those from the Libyan state news agency JANA, which said two people were killed and 16 were hospitalized.)

March 12, 1988 — Katmandu, Nepal; At least 93 people are killed and more than 100 injured when fans fleeing a hailstorm stampede into locked stadium exits.

April 15, 1989 — Sheffield, England; 96 people are crushed to death at an English FA Cup semifinal game between Liverpool and Nottingham Forest, when police open gates to alleviate crowding outside Hillsborough Stadium. The resulting rush of people onto the already filled terrace sections traps fans against riot control fences ringing the field.

Jan. 13, 1991 — Orkney, South Africa; at least 40 people are killed, most of them trampled or crushed along riot-control fences that surround the field, when fans panic and try to escape brawls that break out in the grandstand.

May 5, 1992 — Bastia, Corsica; 17 people are killed and 1,900 injured when a temporary grandstand, erected to increase the capacity of the stadium from 8,500 to 18,000, collapses before a French Cup semifinal match between four-time defending league champion Olympique Marseille and second-division Bastia.

June 16, 1996 — Lusaka, Zambia; Nine soccer fans were crushed to death and 78 others injured during a stampede following Zambia's victory over Sudan in a World Cup qualifying game.

July 14, 1996 — Tripoli, Libya; A riot at a soccer match involving a team controlled by a son of Libyan leader Moammar Gadhafi killed or injured up to 50 people. No exact figures were reported in the Libyan-controlled press.

Oct. 16, 1996 — Guatemala City; At least 78 people died and about 180 others were injured during a stampede at a stadium before a World Cup qualifying match between Guatemala and Costa Rica.

April 6, 1997 — Lagos, Nigeria; five fans were crushed to death and more than a dozen were hospitalized when, following Nigeria's 2-1 World Cup qualifying victory over Egypt, the crowd of 40,000 head for exits and three of the five main gates were locked.

April 23, 2000 — Monrovia, Liberia; At least three reported dead and others injured as thousands of fans forced their way into an overcrowded stadium for a World Cup qualifier between Liberia and Chad.

April 11, 2001 — Johannesburg, South Africa; 47 people were killed during a league match between Kaizer Chiefs and Orlando Pirates in an overcrowded soccer stadium. People outside tried to push into Ellis Park stadium and were trapped against barbed wire. Police had earlier fired tear gas at people stampeding outside the stadium.