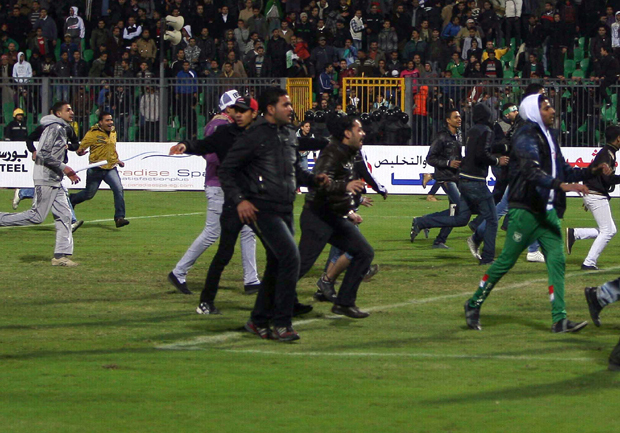 CAIRO - Soccer fans rushed the field after the home team won an unexpected victory over Egypt's top club Wednesday, setting off clashes and a stampede that left at least 74 people dead and 1,000 injured in a Mediterranean port city, officials said.

It was the worst incident of soccer violence in Egypt and the deadliest worldwide since 1996. One player said it was "like a war."

State TV reported that fans also set fire to the main stadium in Cairo after a soccer game between Al-Ismaili and Zamalek teams was called off because of the violence in Port Said, but nobody was injured. Stadium employees at the Cairo stadium said some of the bleachers were set ablaze, but firefighters put it out before it caused much damage.

The melee broke out after fans of Al-Masry, the home team in Port Said, stormed the field after a rare 3-1 win against Al-Ahly, Egypt's top team. Al-Masry supporters hurled sticks and stones as they chased players and fans from the rival team, who ran toward the exits to escape, according to witnesses.

The Supreme Council of the Armed Forces (SCAF) was sending two military planes to evacuate the Al-Ahly team and fans from Port Said, CBS News has learned.

Hesham Sheiha, a health ministry official, said most of the deaths were caused by concussions, deep cuts to the heads and suffocation from the stampede.

Mohammed Abu Trika, a player with Al-Ahly, criticized the police for standing by and not intervening in the violence.

"People here are dying and no one is doing a thing. It's like a war," he said. "Is life this cheap?"

TV footage showed Al-Ahly players rushing for their locker room as fist fights broke out among the hundreds of fans swarming on to the field. Some men had to rescue a manager from the losing team as he was being beaten. Black-clothed police officers stood by, appearing overwhelmed.

Sayed Hamdi, an Al-Ahly player, told state TV: "It was an atmosphere of terrorism."

Egypt's state prosecutor ordered an immediate investigation into the violence, and the Egypt Football Association ordered an indefinite suspension of the annual championship. The parliament said it would convene an emergency session.

State TV reported the casualty toll, citing a health ministry official. A medic in the Port Said morgue, speaking on condition of anonymity because he wasn't authorized to release the information, gave the same figures and said some of the dead in the clashes were security officers.

It was the deadliest incident of soccer violence since Oct. 16, 1996, when at least 78 people died and 180 others were injured in a stampede at a stadium in Guatemala City before a World Cup qualifying match between Guatemala and Costa Rica.

The clashes and ensuing stampede did not appear to be directly linked to the political turmoil in Egypt but the violence concerns about the ability of the state police to manage crowds in the wake of the popular uprising that forced President Hosni Mubarak to step down last year.

Thousands of Al-Ahly supporters protested against the military in Cairo, vowing revenge. They say the killing of their mates was in retaliation for the role that their fans' association played in the January 25, 2011 Egyptian revolution.

Essam El-Erian, a member of Egypt's Muslim Brotherhood's political arm, said the military and police were responsible for the violence, accusing them of complicity in the violence in a bid to stop critics who are demanding an end to state of emergency that give security forces wide-ranging powers.

"This tragedy is a result of intentional reluctance by the military and the police," he said.

State TV appealed to Egyptians to donate blood for the injured in Port Said, and the military sent two aircraft to evacuate serious cases to the capital, Cairo.

The Port Said game was a face-off between two teams with a long history of fierce competition, Al-Masry, the home team, and Al-Ahly, which is Cairo-based and one of Egypt's most popular teams. Al-Ahly was runner-up for the Asian club title in 1986, its best finish.

FIFA President Joseph S. Blatter said he was "shocked and saddened" by the death, sending his condolences to the families of those who died.

"This is a black day for football. Such a catastrophic situation is unimaginable and should not happen," he said in a statement. "I am very shocked and saddened to learn this evening that a large number of football supporters have died or been injured following a match in Port Said, Egypt."