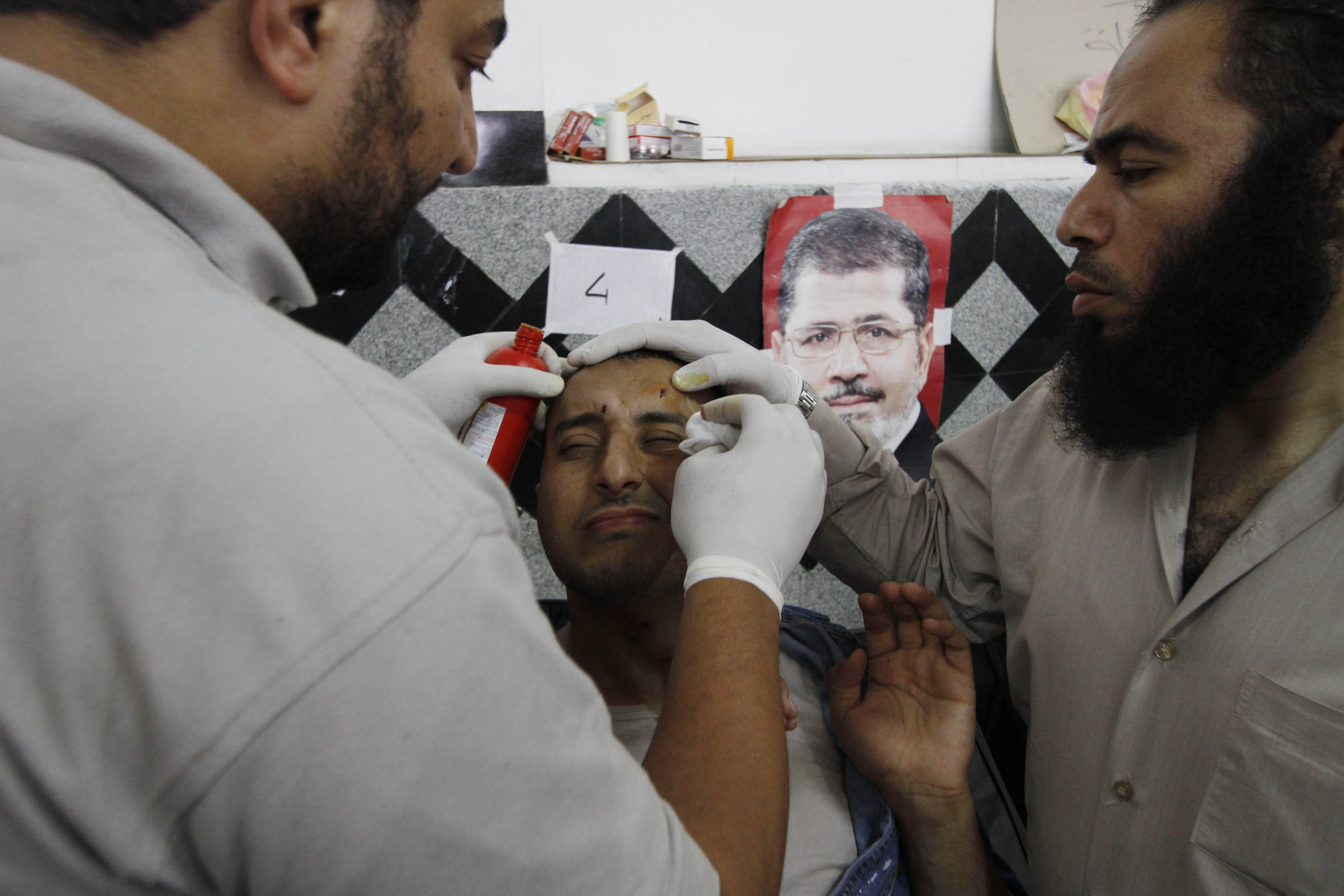 CAIRO Egyptian soldiers and police clashed with Islamists protesting the military's ouster of the president in bloodshed that left at least 51 protesters and three members of the security forces dead, officials and witnesses said, and plunged the divided country deeper into crisis with calls by the Muslim Brotherhood's political party for all-out rebellion against the army.

Even before all the bodies were counted, there were conflicting accounts on how the violence began, with Morsi's backers saying it was an unprovoked attack, and the military saying they came under assault first. More than 400 were wounded in the mayhem.

Egypt's top Muslim cleric warned of "civil war" and said he was going into seclusion as a show of protest to both sides until the violence ends.

Sheik Ahmed el-Tayeb, head of Al-Azhar Mosque, said he had "no choice" but to seclude himself at home "until everyone shoulders his responsibility to stop the bloodshed instead of dragging the country into civil war."

CBS News correspondent Clarissa Ward reports that the military issued statements saying the clashes were sparked when a group of armed "terrorists" attempted to storm the Republican Guard headquarters.

In a televised statement hours after the bloody confrontation, an Army spokesman said the incident was sparked when an officer was killed by a sniper's bullet fired from a high location at dawn. He said eight more military personnel remained in critical condition.

The spokesman said the security forces at the scene acted to defend the Republican Guard building which came under attack, as was their mandate. He said some of the perpetrators of the attack had positioned themselves on nearby rooftops.

A spokesman from Morsi's Muslim Brotherhood and witnesses at the scene, however, said military forces opened fire at dawn on the protesters outside the Republican Guard building as they prayed.

The different accounts could not be immediately reconciled. It was not possible to determine what sparked the violence from the many videos posted online after the shooting. CBS News has been unable to find any videos which seem to depict the initial moments of the melee.

Whatever the spark, clashes went on for three hours, with protesters hurling stones and molotov cocktails from rooftops and gunshots ringing out. Nearby clinics run by Brotherhood supporters were swamped by wounded protesters, some with gaping, bleeding wounds. More than 400 were wounded in the mayhem, officials said.

The military said more than 100 armed attackers had been detained.

Soon after the attack, the Al-Nour party, an ultraconservative Islamist party that had been talking to the new government about participating in the political process, announced it was withdrawing its support for the transition plan in response to the "massacre."

The military, which removed Morsi on Wednesday after mass protests against him, now may face pressures to impose stricter security measures to try to keep unrest from spilling out of control. It will also have to produce compelling evidence to support its version of events or otherwise suffer what is already shaping to be a Brotherhood media blitz to portray the military as a brutal institution with little regard for human life or democratic values.

In a statement posted on the group's website, the Muslim Brotherbood called for "the great Egyptian people to rise up against those who want to steal their revolution with tanks."

Satellite broadcaster Al-Jazeera showed footage from a nearby field hospital of at least six dead bodies laid out on the ground, some with severe wounds. A medic from the area, Hesham Agami, said ambulances were unable to transport more than 200 wounded to hospitals because the military had blocked off the roads.

Al-Shaimaa Younes, who was at the sit-in, said military troops and police forces opened fire on the protesters during early morning prayers. "They opened fire with live ammunition and lobbed tear gas," she said by telephone. "There was panic and people started running. I saw people fall."

Women and children had been among the protesters, she said.

Meanwhile, in Washington, the talk revolved around nudging Egypt back toward democracy. On "Face the Nation," Arizona Republican Senator John McCain said it was time for the U.S. to take a stand.

"The United States should not be supporting this coup," McCain said. He argued that the U.S. should reassess the $1.5 billion it gives to Egypt each year, much of which goes to the country's military.

"Reluctantly, I believe that we have to suspend aid until such time as there is a new constitution and a free and fair election," McCain said.

Morsi supporters have been holding rallies and a sit-in outside the Republican Guard building since the military deposed Morsi during massive protests against him. The military chief replaced Morsi with an interim leader, until presidential elections are held. But Morsi's supporters refuse to recognize the interim leader and insist Morsi be reinstated. Besides the Republican Guard sit-in, they are also holding thousands-strong daily rallies at a nearby mosque.

Even as victims of the morning violence were transported to local hospitals, the political fallout from the incident began with the Islamist Salafist Nour party withdrawing from the formation of a new government in protest over "the massacre."

Egypt's interim president Adly Mansour issued a statement saying his office had ordered an official inquiry into the shooting, and asking Egyptians to avoid government buildings, according to state-run Egyptian TV. A spokesman for Mansour said the violence would not hinder efforts to form a full interim government.

Morsi's opponents are also holding rival rallies. They say the former president lost his legitimacy by mismanaging the country and not ruling democratically, leading to a mass revolt that called on the army to push him from office.