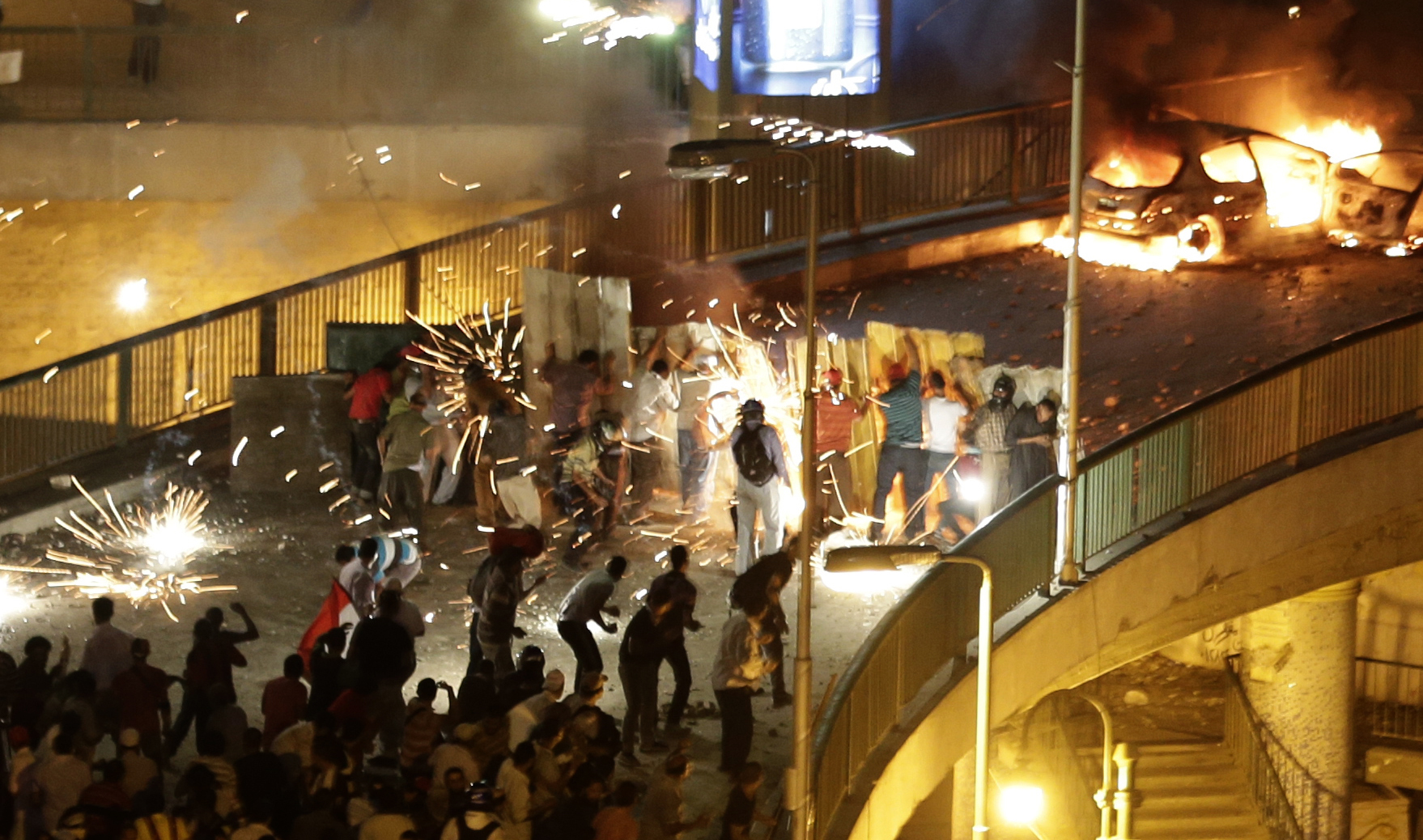 CAIRO Officials say 30 people have been killed and more than 200 wounded in clashes around the country involving opponents and backers of ousted President Mohammed Morsi, as well as security forces.

Emergency services official Amr Salama says 12 people died when hundreds of Islamists descended on a rally by opponents of ousted President Mohammed Morsi in the Mediterranean coastal city of Alexandria, opening fire with guns. He says clashes erupted, and police joined on the side of the Morsi opponents.

Meanwhile, an Interior Ministry spokesman says the deputy head of the Muslim Brotherhood, Khairat el-Shater, considered the most powerful man in the organization has been arrested.

Spokesman Hani Abdel-Latif says el-Shater and his brother were arrested late Friday from an apartment in eastern Cairo on allegations of inciting violence against protesters in recent days.

In Cairo, another person was killed in clashes that erupted after nightfall when Islamists attacked Morsi opponents near Tahrir Square.

Four others died in the northern Sinai city of el-Arish, where Islamists stormed the main government building. Another was killed in the southern city of Assiut.

Meanwhile, Egyptian military armored vehicles have raced onto a main bridge over the Nile River in Cairo in the first major move to break up the clashes. Several armored vehicles, at least one with young Morsi opponents sitting on the roof, deployed on the 6th of October Bridge, near Tahrir Square, aiming to chase away Morsi supporters. Military helicopters flew toward Tahrir.

The army shooting in Cairo came when hundreds of protesters marched on the Republican Guard building, where Morsi was staying at the time of his ouster Wednesday night before being taken into military custody at an unknown location. The crowd approached a barbed wire barrier where troops were standing guard around the building.

When one person hung a sign of Morsi on the barrier, the troops tore it down and told the crowd to stay back. A protester put up a second sign, and the soldiers opened fire, according to an Associated Press photographer.

Many of those injured had the pockmark wounds typical of birdshot. The BBC's Middle East editor, Jeremy Bowen, was hit by birdshot in the head as he covered the clashes. "Am fine," he reported in a Tweet.

Protesters pelted the line of troops with stones, and the soldiers responded with volleys of tear gas.

The clashes appeared to ease with the start of midafternoon prayers.

Britain's Foreign Secretary William Hague said he was "very concerned" by the reports of violence. In a Twitter message, he wrote: "Hope calm heads will prevail, vital to avoid escalation."

The top leader of Egypt's Muslim Brotherhood, General Guide Mohammed Badie, who was taken into custody by security forces soon after the military ousted Morsi, was released from detention Friday.

Badie later delivered a speech at a rally in support of the ousted president, vowing to "gain our rights."

He led the crowd of tens of thousands in a chant: "Free revolutionaries, we will continue the path."

The arrest of Badie was a dramatic step, since even Mubarak and his predecessors had been reluctant to move against the group's top leader. The ranks of Brotherhood members across the country swear a strict oath of unquestioning allegiance to the general guide, vowing to "hear and obey." It has been decades since a Brotherhood general guide was put in a prison.

The first coordinated assault by Islamic militants since Morsi's ouster, however, came in the lawless Sinai Peninsula. Masked assailants launched coordinated attacks Thursday with rockets, mortars, RPGs and anti-aircraft guns on el-Arish airport, where military aircrafts are stationed, as well as the Central Security camp in Rafah and five military and police posts.

The military and security forces returned the fire. Military helicopters flew over the area.

Egypt indefinitely closed its nearby border crossing into the Gaza Strip after the assault, sending 200 Palestinians back into Gaza, said Gen. Sami Metwali, director of Rafah passage.

Extremist Islamic militants have gained strength in the Sinai over the past two years since a security breakdown that accompanied the 2011 uprising that forced Morsi's predecessor, Hosni Mubarak, from power. Egypt's military and police have been battling to contain them.

The task will be a difficult one -- both logistically and politically -- as the peninsula is vast, largely out of the control of the Egyptian authorities in some parts. Having just ousted a democratically-elected president, it is also an awkward time for the military to contemplate an all-out offensive against hardliners in the region.

Military officials denied reports that an official state of emergency had been declared in south Sinai on Friday, but added that troops in the area remained on alert.

The military forced Morsi out Wednesday after millions of Egyptians turned out in four days of protests. The Muslim Brotherhood hotly rejected an appeal by the military to take part in forming a new regime, after the Brotherhood's top leaders were targeted with arrest warrants.

A military statement late Thursday appeared to signal a wider wave of arrests was not in the offing. A spokesman, Col. Ahmed Mohammed Ali, said in a Facebook posting that the army and security forces will not take "any exceptional or arbitrary measures" against any political group.

The military has a "strong will to ensure national reconciliation, constructive justice and tolerance," he wrote. He spoke against "gloating" and vengeance, saying only peaceful protests will be tolerated and urging Egyptians not to attack Brotherhood offices to avert an "endless cycle of revenge."

The Brotherhood charged that the military staged a coup against democracy and said it would not work with the new leadership. It and harder-line Islamist allies called for a wave of protests Friday, naming it the "Friday of Rage," vowing to escalate if the military does not back down.

Brotherhood officials urged their followers to keep their protests peaceful. Thousands of Morsi supporters remained massed in front of a Cairo mosque where they have camped for weeks, with line of military armored vehicles across the road keeping watch.

"We declare our complete rejection of the military coup staged against the elected president and the will of the nation," the Brotherhood said in a statement, read by senior cleric Abdel-Rahman el-Barr to the crowd outside the Rabia al-Adawiya Mosque in Cairo.

"We refuse to participate in any activities with the usurping authorities," the statement said, while urging Morsi supporters to remain peaceful. The Rabia al-Adawiya protesters planned to march Friday to the Ministry of Defense.

The Brotherhood denounced the military's shutdown of its television channel, Misr25, its newspaper and three pro-Morsi Islamist TV stations. The military, it said, is returning Egypt to the practices of "the dark, repressive, dictatorial and corrupt ages."

Morsi has been under detention in an unknown location since Wednesday night, and at least a dozen of his top aides and advisers have been under what is described as "house arrest," though their locations are also unknown.

Security officials have also arrested Mahdi Akef, predecessor of Badie as the top leader of the Brotherhood, and one of his two deputies, Rashad Bayoumi, as well as Saad el-Katatni, head of the Brotherhood's Freedom and Justice Party, and ultraconservative Salafi figure Hazem Abu Ismail, who has a considerable street following.

Authorities have also issued a wanted list for more than 200 Brotherhood members and leaders of other Islamist groups. Among them is Khairat el-Shater, another deputy of the general guide who is widely considered the most powerful figure in the Brotherhood.

Badie and el-Shater were widely believed by the opposition to be the real power in Egypt during Morsi's term.

The National Salvation Front, the top opposition political group during Morsi's presidency and a key member of the coalition that worked with the military in his removal, criticized the moves, saying, "We totally reject excluding any party, particularly political Islamic groups."

The Front has proposed one of its top leaders, Mohammed ElBaradei, to become prime minister of the interim Cabinet, a post that will hold strong powers since Mansour's presidency post is considered symbolic. ElBaradei, a Nobel Peace laureate who once headed the U.N. nuclear watchdog agency, is considered Egypt's top reform advocate.

"Reconciliation is the name of the game, including the Muslim Brotherhood. We need to be inclusive," Munir Fakhry Abdel-Nour, a leading member of the group, told The Associated Press. "The detentions are a mistake."