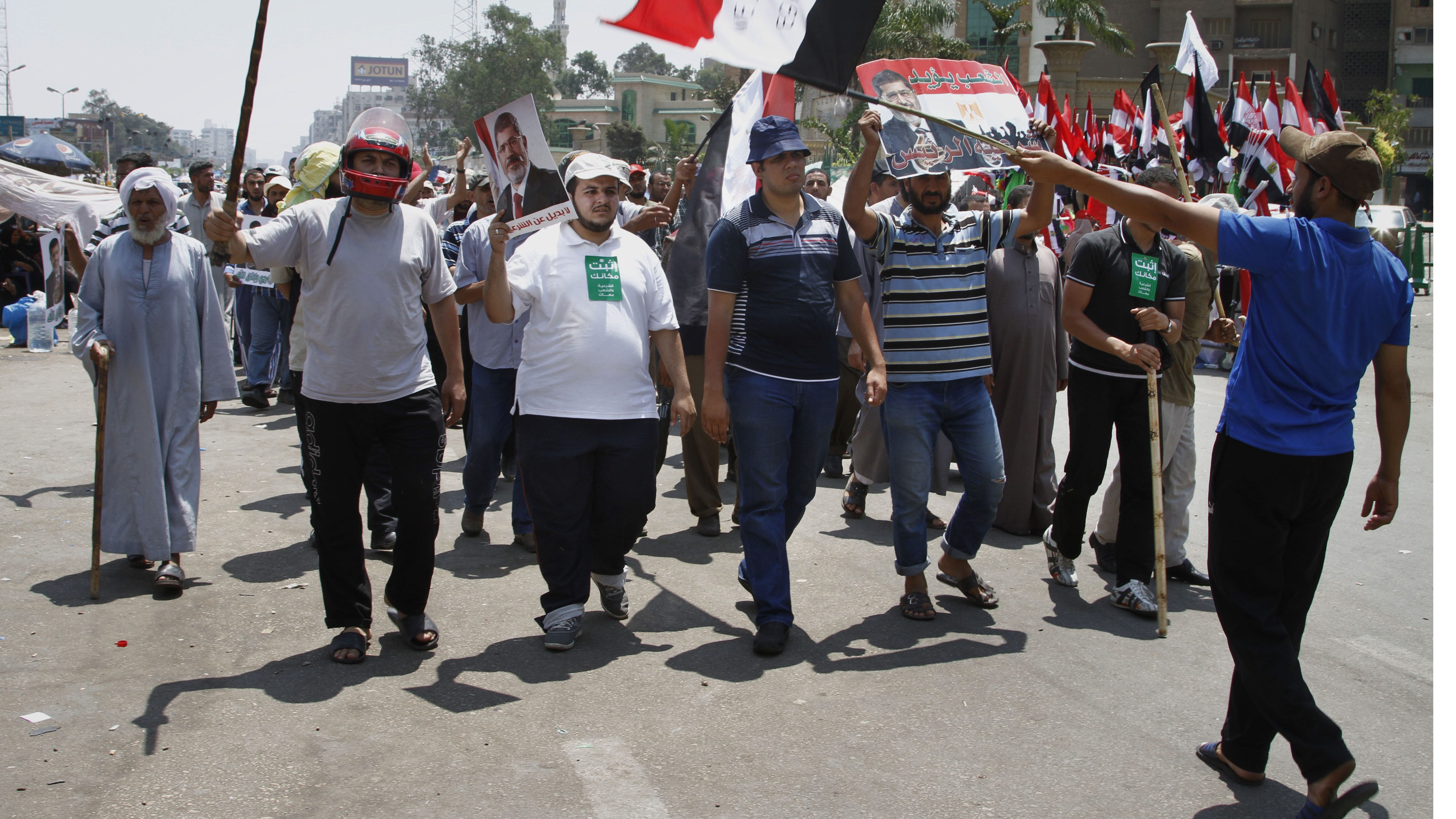 CAIROEgypt's new leadership wrangled over the naming of a prime minister, as both the Muslim Brotherhood and their opponents called for new mass rallies Sunday, renewing fears of another round of street violence over the military's ousting of Islamist President Mohammed Morsi.

The calls for competing rallies come after clashes two days ago between the rival camps left at least 36 dead and more than 1,000 injured nationwide.

The military said troops are beefing up security ahead of the protests and warned against any "provocative actions." Any violators will be "dealt with decisively, under the law," the army spokesman said in an official Facebook posting. In Friday's violence it sided with the anti-Morsi crowds and in one case, opened fire on pro-Morsi demonstrators.

The Brotherhood, which helped propel Morsi to power as Egypt's first democratically elected leader, has denounced the military's move as a coup against democracy and demands he be reinstated. Currently, Morsi is in detention with the military, though his location is unknown.

In a Facebook posting Sunday, the Brotherhood's supreme leader Mohammed Badie said the "leaders of the unconstitutional coup continue flagrant violations against the Egyptian people."

Since Morsi's removal Wednesday night, several of the Brotherhood's top figures were detained and the group's TV station and newspaper were shut down, as were three other pro-Morsi Islamist television stations. Among those detained is Badie's deputy Khairat el-Shater, seen as the most powerful figure in the group and its main decision-maker.

At the same time, the collection of liberal, secular and youth groups that spearheaded the campaign to oust Morsi, called for a mass rally of their own Sunday in Cairo's Tahrir Square to defend the country's new, military-backed interim leadership.

Last week, millions of Egyptians nationwide participated in four days of mass protests demanding Morsi be removed, angered by what they saw as the domination of the Brotherhood and Morsi's failures to address worsening economic woes. When the military ousted Morsi, it suspended the Islamist-drafted constitution and installed a senior judge as interim president to form an administration.

But divisions were stalling the naming of a prime minister and creation of a new Cabinet. In the interim period - whose length remains unknown - the prime minister will have sweeping powers to govern, while the president is expected to be a largely symbolic post.

ElBaradei, a Nobel Peace laureate for his time as head of the U.N. nuclear watchdog, is an inspiring figure among the leftists, secular and revolutionary youth groups behind the 2011 uprising that toppled autocrat Hosni Mubarak. Word on Saturday that he would be appointed prime minister sparked cheers among many of their ranks, believing he can push a strong reform agenda.

But the 71-year-old ElBaradei is deeply distrusted as too secular among many Islamists and among much of the public he is seen as elite. The al-Nour Party is one of the few Islamist groups openly cooperating with the new leadership. The party was the second biggest winner in 2011-2012's parliament elections after the Brotherhood.

Mohammed Aboul-Ghar, the leader of the liberal Egyptian Socialist Democratic Party, said al-Nour initially agreed to ElBaradei taking the post, but then shifted its position for unknown reasons. He said talks are still ongoing through mediators.

Abdullah Badran, a leading al-Nour lawmaker, said there was "misunderstanding" and that it hadn't accepted ElBaradei. The party has asked for 48 hours to propose alternatives, he said, adding that it will finalize its position but will not back ElBaradei.

"This sensitive period requires an independent who can win consensus not cause more divisions and polarization," he told Associated Press. "We don't want prejudices because it would only lead to more divisions."

He said that objections to ElBaradei are rooted in his lack of popularity not only among Islamists but among a large sector of Egyptians.

Al-Nour was once an ally of Morsi but broke with him over the course of his year in office, saying his Brotherhood was trying to monopolize power, even over other Islamists. When the June 30 wave of anti-Morsi protests began, the party called on its followers to stay neutral. But it supported the military's intervention to remove the president, joining in talks with army chief Gen. Abdel-Fattah el-Sissi.

It is now is among a number of groups weighing in on the post-Morsi leadership. Others include the National Salvation Front - a collection of liberal and secular parties including ElBaradei's - and Tamarod, or "Rebel," the youth group that helped organize the anti-Morsi revolt, as well as a party of moderate Islamist Abdel-Moneim Aboul-Fotouh.

On Saturday, Tamarod described Al-Nour's objections to ElBaradei as "blackmailing" and rejected "arm-twisting" by the party.

It called for protests to defend "popular legitimacy" and "confirm the victory achieved in the June 30 wave."

Meanwhile, a Cairo court on Sunday cleared 12 prominent activists from charges of inciting violence during protests near the Brotherhood's headquarters in March.

Among them was prominent blogger Ahmed Douma, who was sentenced six months in jail in beginning of June in a separate case for calling Morsi a criminal and a murderer in media interviews. He was freed on Thursday by authorities.