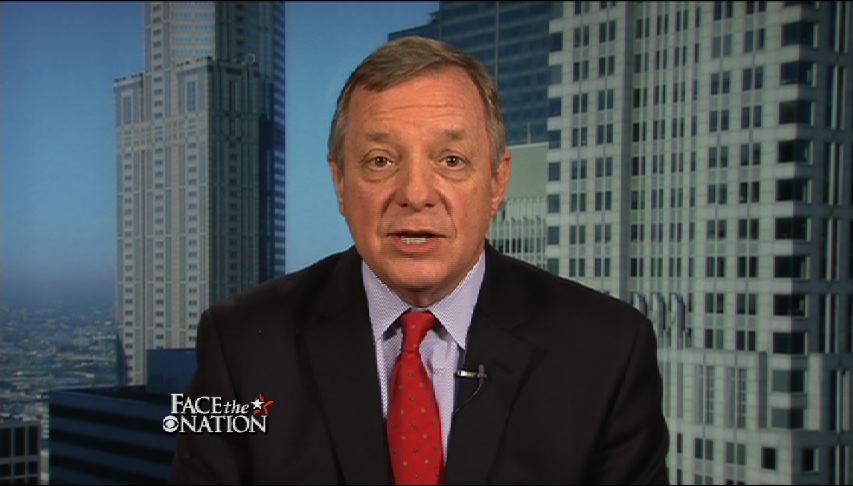 (CBS News) After a week of hearings on Capitol Hill about the attacks in Benghazi, Libya, Sen. John McCain, R-Ariz., continued his criticism of U.N. Ambassador Susan Rice for blaming the attacks on the U.S. Consulate on a spontaneous demonstration. He said reaffirmed his opposition to her possible nomination to Secretary of State.

"[S]he has a lot of explaining to do, and I'm curious why she has not repudiated those remarks," McCain said on "Face the Nation."

On the same program, Sen. Richard Durbin, D-Ill., however, said ongoing Republican finger-pointing at Rice is misguided and political. He said McCain is holding Rice to an "entirely different standard" than he held President George W. Bush's Secretary of State nominee Condoleezza Rice.

"Eight years ago, when President Bush suggested Condoleezza Rice for Secretary of State, some people said, 'Well, wait a minute, wasn't she part of misleading the American people about intelligence information that led to our invasion of Iraq?'" Durbin said. He noted that McCain and Sen. Lindsey Graham, R-S.C., defended Condoleezza Rice by admonishing their Senate colleagues to not "hold her accountable for the intelligence that was given to her. She was simply relating what she had heard."

"Eight years later, Susan Rice, who may or may not be a nominee for Secretary of State, is being held by Senator McCain and Senator Graham to an entirely different standard," Durbin said.

"[I]t wasn't her fault," Durbin said. "To hold Ambassador Rice accountable for a decision by intelligence agencies -- not by her, not by the White House -- to withhold some part of the information is fundamentally unfair."

McCain said there is still hope for Rice should she be nominated to replace Secretary of State Hillary Clinton. "I think we give all nominees the benefit of a hearing process.... Maybe she could start out by publicly coming back on this show and saying, 'I was wrong. I gave the wrong information on your show some several weeks ago.' That might be a beginning," he said.

McCain added that he likely won't support "any nominee right now" until he has more answers about the attack.

"It really goes to the heart of this light footprint policy that this administration has been pursuing," McCain said. He said "the chickens are now coming home to roost."

The top Republican on the Senate Armed Services Committee claimed Rice and the administration said the demonstration was not terrorism-related because it didn't fit into their narrative that al Qaeda is diminished and Osama bin Laden is dead.

It was the "narrative of [the president's] reelection campaign," McCain said, but said the president "hasn't gotten them. Al Qaeda is not on the run." He pointed to active networks in Mali, North Africa and Libya.

Durbin said the issue had been "stoked up" because it was at the height of a presidential campaign.

Senator Olympia Snowe, R-Maine, who is retiring at the end of this Congress, said she is most concerned about why the U.S. Consulate did not have more security.

"They had abundance of threat reports and incidents, both to that facility and other consulates that would have suggested that they were in a high-threat environment," Snowe said.