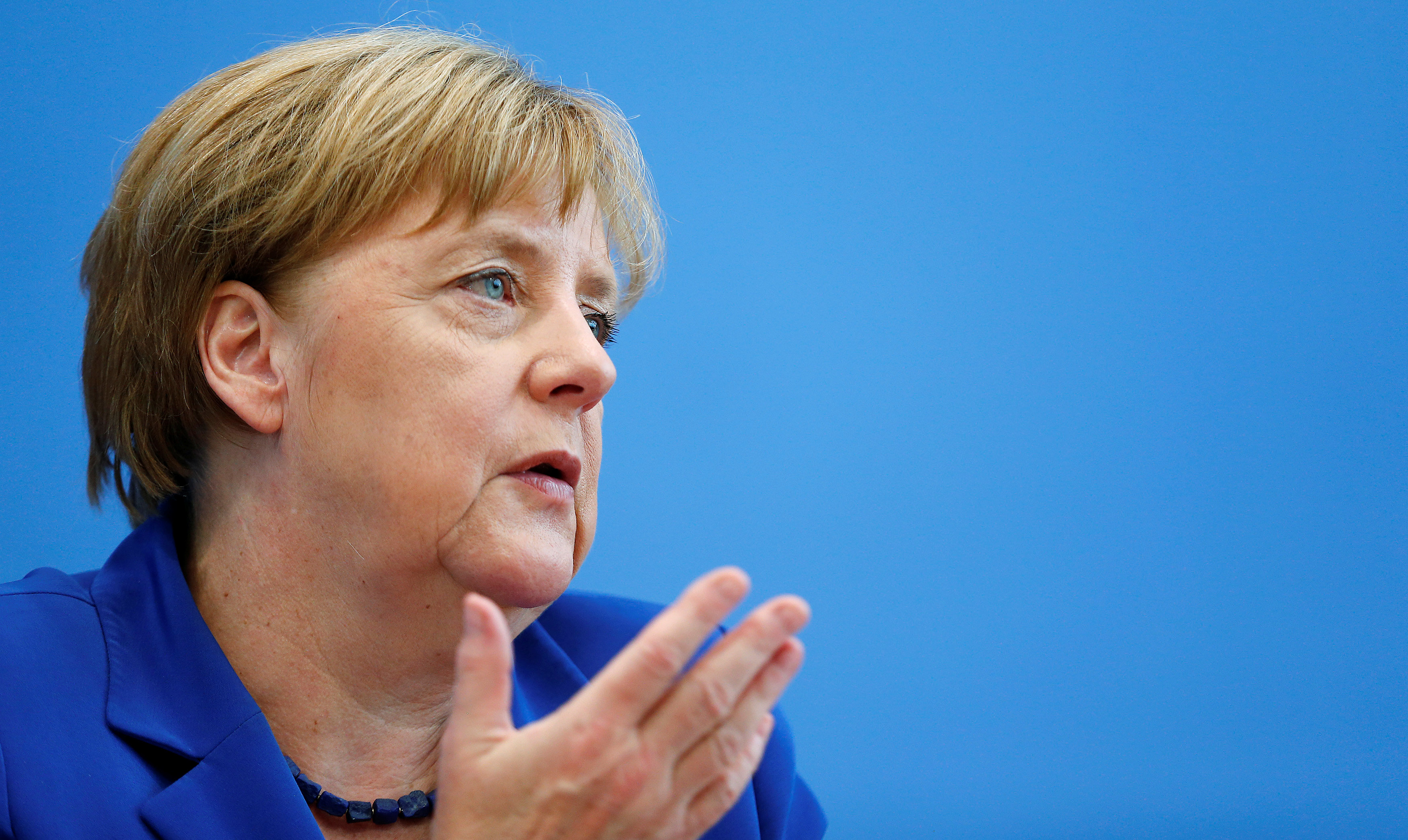 “In short, Hillary Clinton wants to be America’s Angela Merkel,” he said at the event in Youngstown, Ohio. “And you know what a disaster this massive immigration has been to Germany and the people of Germany. Crime has risen to levels that no one thought they would ever, ever see. It is a catastrophe.”

Trump was clearly trying to make a point about the European refugee crisis, arguing that Clinton’s policy toward refugees was approaching the scale of Germany’s. In 2015, Germany took in just over 1 million refugees from the Middle East and Africa, a policy which has divided the country’s residents and created a complex political situation there.

But those listening to Trump’s comments from across the Atlantic in Berlin noted the comparison with both a bit of confusion and a certain amount of amusement-- because while it’s true that the refugee crisis in Germany has presented a new political challenge for Merkel, she’s still relatively popular and overall remains one of the most influential, well-regarded leaders in Europe.

And what’s more, many Americans probably have no idea--or only the vaguest idea--who Merkel actually is.

“It struck me when I heard these comments of Trump,” said Peter Matuschek, chief political analyst for the German polling firm Forsa. “[Merkel] still is enjoying approval rates that [former Chancellor Helmut] Kohl had never dreamed of.”

Trump’s comments Monday about the German leader were only the latest in a string of criticism he’s thrown Merkel’s way: the GOP nominee has previously claimed that Merkel is “ruining Germany,” that she is a “catastrophic leader” and even that she’ll “be out if they don’t have a revolution.”

“I don’t know what happened to her,” Trump said back in January. “She was doing well, maybe she got power-hungry, maybe she thought she was invincible ... the German people are saying we’ve had it, we’ve had it.”

It’s certainly true that the refugee crisis has put Merkel--who has typically had sky-high approval ratings--in one of the toughest spots of her political career. Her approval ratings have bounced up and down over the last year as the refugee crisis and various related terrorist attacks hit the headlines; that was especially true after reports of women being sexually assaulted in Cologne on New Year’s Eve this year, attacks that were largely believed to be perpetrated by refugees and recent migrants.

A new poll out from the German TV station ARD found that two-thirds of Germans disapproved of Merkel’s handling of the refugee crisis, compared with 34 percent who were in favor. As for her overall approval rating in the poll, part of a series called DeutschlandTrend, Merkel was at 47 percent approval--higher than in February after the New Year’s Eve attacks, but far lower than the 75 percent approval rating she had in April of 2015 before the refugee crisis heated up. (By comparison, an August CBS News poll had Trump’s favorability rating at 36 percent among U.S. voters; Clinton’s was at 46 percent.)

“I would say the beginning was the New Year’s Eve incident in Cologne. That was a point where people were looking at this whole thing differently,” said Jan Philipp Burgard, a German journalist and political scientist who covered the 2008 and 2012 U.S. elections for ARD.

In his speech, Trump specifically referred to that incident. “In Cologne, Germany, on New Year’s Eve, we have seen the reports of sexual violence and assault, far greater than anybody knows,” Trump said Monday. He’d previously claimed that there were “hundreds and hundreds of rapes” during that night, which is an exaggeration of the actual reported numbers.

Still, Merkel is viewed internationally as perhaps the strongest and most visible leader in Europe--something that does not go overlooked when it comes to her political fortunes at home.

Merkel is still strongly favored to win a fourth term next year when Germany holds its next national elections. According to a Forsa poll from late July, 46 percent of German citizens named Merkel as their pick for chancellor if the position were elected directly--down from the mid-50s last year, but still more than 30 points higher than any of her potential opponents. The leader of the second-biggest party in Germany, the Social Democratic Party’s Sigmar Gabriel, took only 15 percent in the same poll.

“Her approval rates are still very high, especially compared to the other politicians,” Matuschek said. “Although there has been some dissatisfaction in her rank and file with the refugee issue, of course when people decide to vote they do not only evaluate one policy field but the whole picture.”

(For reference, Forsa also asked Germans how they felt about Trump’s proposed Muslim ban last month. Just 10 percent said they were in favor of something similar--and 87 percent of those surveyed were against it.)

If Trump was hoping the new nickname would stick to Clinton the way “Crooked Hillary” or “Lyin’ Ted” did, he might have a tougher time with this one just because of how relatively unknown Merkel is in the U.S. In a Pew Research Center survey in 2012, American respondents were asked to identify Merkel’s title out of a list of several options; two-thirds couldn’t say.

Of those who did have an answer, twenty-two percent were correctly able to name her as the leader of Germany; 4 percent thought she was the leader of France, 5 percent said she headed the International Monetary Fund and 4 percent thought she was in charge of NATO. (Those numbers may have gone up in the last four years, but it’s probably fair to say that Merkel is still relatively unknown among average U.S. voters.)

Still, that lack of more than a basic knowledge among American voters about Merkel and what’s happening in Germany could potentially work to Trump’s advantage, some said.

“I think that for Americans there’s certainly admiration but also a little bit of puzzlement about what Angela Merkel has undertaken with letting refugees come in with no upper limit into Germany,” said Sudha David-Wilp, a senior transatlantic fellow at the German Marshall Fund in Berlin. “Donald Trump is using that sort of grey-zone of lack of information--because we really don’t know what the outcome will be in Germany, there are arguments for and arguments against it.”

It’s unclear how sustained Trump’s use of the new moniker will be--he hasn’t seemed attached to “Crooked Hillary,” expressing some regret at one point that he’d already used “Lyin’” for Cruz (In fact in June, he launched LyingCrookedHillary.com). But he clearly intended to test it out beyond the confines of his speech: the GOP mogul’s new branding continued with subsequent campaign emails bearing the “Merkel” nickname, all pertaining to the refugee issue. “America’s Merkel Plans 620,000 Refugees,” one read. “When Will America’s Merkel Answer Questions On Her Radical Refugee Plans?” said another.

Merkel, for her part, is staying above the U.S. election fray and refraining from commenting on Trump.

“I don’t want to wade into the American debate,” she said during a July news conference when asked about Trump. “I’m following it with interest. I’ll just wait for the vote result.”