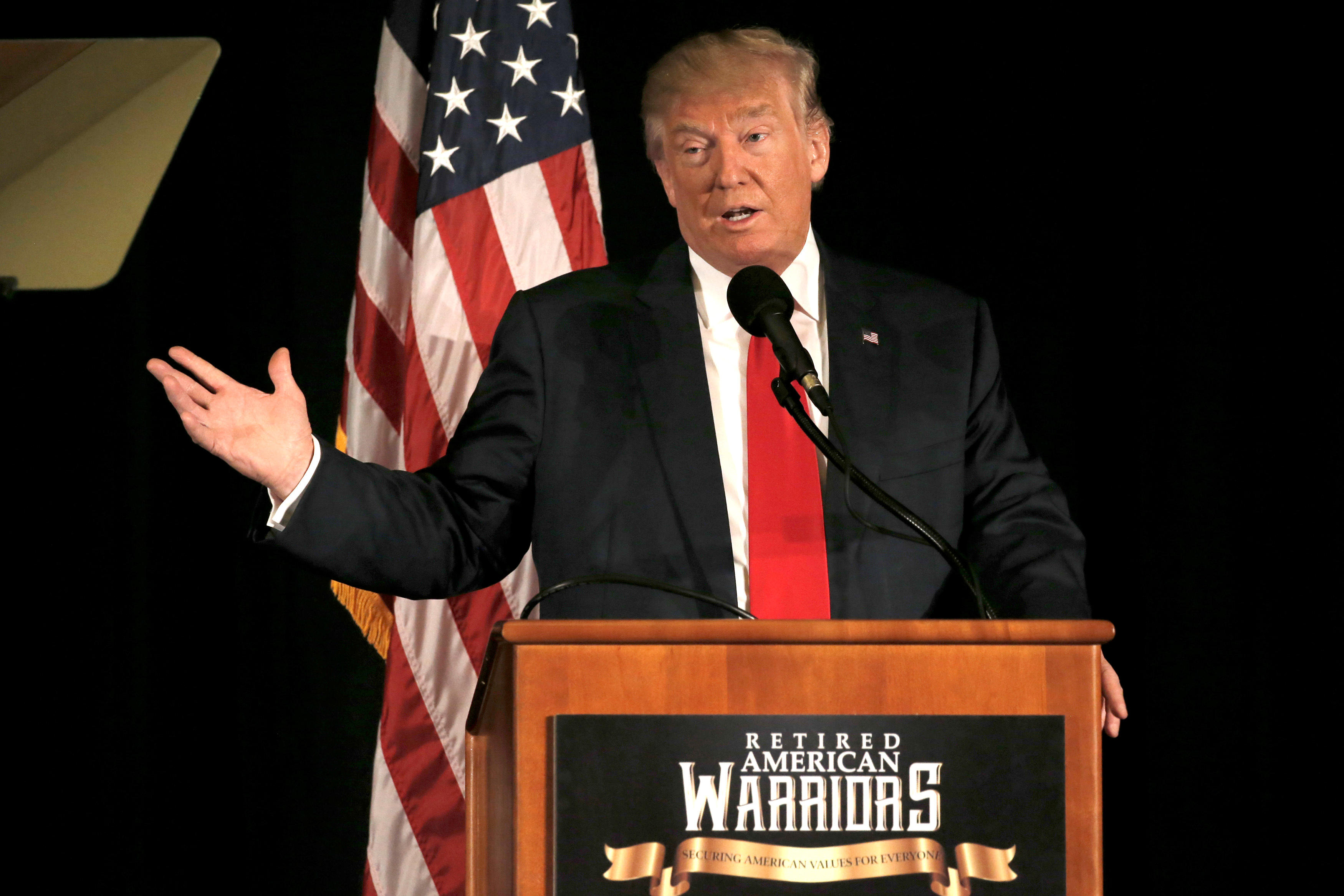 Donald Trump on Monday vowed to strengthen the government’s cybersecurity capabilities and to make it a top priority if he’s elected president.

“To truly make America safe, we truly have to make cybersecurity a major priority,” the GOP presidential nominee said at an event in Virginia hosted by Retired American Warriors (RAWPAC) with about 250 retired officers in the audience.

If elected commander in chief, Trump said he would make cybersecurity an “immediate and top priority for my administration.”

Trump said he would order a “thorough review of cyber defenses and weaknesses” and he said that cyberattacks from foreign governments including “China, Russia and North Korea constitute one of our most critical national security concerns.”

He then listed hacks into JP Morgan, eBay, Target and the Office of Personnel Management.

“Attacks like these are happening on a regular basis both in the United States and around the world,” Trump said. “I will make certain that our military is the best in the world -- in cyber offense and defense --and in every other way, by the way, every other way.”

Trump said he would ask his secretary of defense and joint chiefs for recommendations that would augment the U.S. cyber command.

“The United States must possess unquestioned capacity to launch crippling counter-cyberattacks,” he said. “This is the warfare of the future...America’s dominance in this arena must be unquestioned and today, it’s totally questioned.”

His comments on cybersecurity, which he read from a teleprompter, seemed to convey a slightly different message from his remarks on the issue at the first presidential debate a week ago.

At the debate at Hofstra University against Hillary Clinton, Trump said that it’s not completely clear if Russia hacked into the Democratic National Committee. U.S. officials and experts have said people working for the Russian government did, in fact, hack into the DNC.

During a question-and-answer session at the event Monday, Trump also slammed the Obama administration for giving away too much about its plans to defeat the Islamic State in Iraq and Syria (ISIS) such as the number of U.S. servicemembers it’s deploying overseas.

“The American public doesn’t need to know the date, time and hour that we’re going to attack,” he said.

He also criticized Clinton for saying during the campaign that she is against sending boots on the ground to fight ISIS.

During the event, he was also asked how he would fix the system at the Department of Veterans Affairs. He said that there are 22 veterans who commit suicide per day. He then appeared to link suicides with long wait times at the VA.

“A lot of the suicide is because people can’t wait to see doctors because the waits are so long. That’s an administrative problem,” he said.

“The media continues to operate as the propaganda arm of Hillary Clinton as they took Mr. Trump’s words out of context in order to deceive voters and veterans—an appalling act that shows they are willing to go to any length to carry water for their candidate of choice,” he said. “Mr. Trump was highlighting the challenges veterans face when returning home after serving their country. He has always respected the service and sacrifice of our military men and women—proposing reforms to Veteran Affairs to adequately address the various issues veterans face when they return home.”

Trump said instead of having veterans wait for medical attention at the VA, he would give them the right to see a doctor at a public or private health center or hospital and the government would pay the bill. He claimed it would “totally reduce” all the wait times.