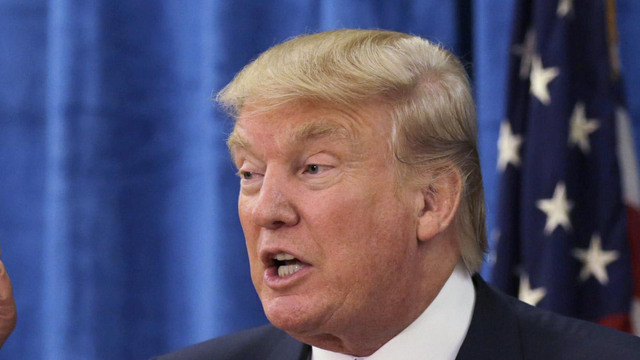 Donald Trump's campaign has been promising specifics for weeks now, recently releasing a detailed immigration plan. At a speech in Greenville, South Carolina on Thursday, a crowd of about 1,400 heard one more specific: The hair is real.

Trump wanted to prove that he did not, in fact, wear a toupee.

"It's my hair!" Trump exclaimed to the laughing crowd. "I swear! Come here. Just come on up here. They're going to let you. You have to do an inspection, this is getting crazy."

He brought Mary Margaret Bannister, the South Carolina House Majority leader's wife, on stage and let her touch the most famous hairstyle in the 2016 presidential race. The woman did as she was told and went to the microphone and said, "Yes, I believe it is."

This wasn't the first time Trump has revved up campaign crowds by proving his hair's authenticity. He also had a supporter join him on stage to touch his hair at a New Hampshire event in June.

Thursday's speech was hosted by the Upstate Chamber Coalition, and campaign officials said that tickets sold out five days after the event was announced. The event featured classic Trump call and response. When he mentioned Sen. Lindsey Graham, South Carolina's Republican home state senator and one of Trump's 2016 rivals, the crowd booed heavily.

"[Graham's] out of control. Poll came out the other day and he was at zero. Zero! Even Pataki was higher. Pataki was at zero with an arrow up!" Trump said, referring to former New York Gov. George Pataki, another GOP 2016 candidate.

"I want to see the man win," said Rick Routzahn, of Myrtle Beach. Routzahn, who works in home repair, traveled to the event hoping to become a full-time volunteer for the campaign. He was wearing a customized baseball shirt with Trump emblazoned on the back. "No offense, a lot of us have a disdain for you media guys. If he's taking any of you on, it would be like, 'Yeah, go get 'em!'"

At times, Trump acted like a stand-up comedian, especially when referring to his immigration plan.

"They buy a ladder at Home Depot, and they're over the wall," Trump said, referring to the Southern border. "People aren't going over my wall."

After the speech and a private meet-and-greet with local VIP's, Trump took questions from reporters.

"I believe very strongly in the Second Amendment," Trump said, in response to a question on gun violencein connection to the shootings of two journalists in Virginia. "We have people with mental disabilities, mental problems. It's too bad somebody can't figure it out. We have a serious mental problem."

He did not specify what his solution would be. Trump also announced that he would be holding a joint event with one of his rivals for the GOP nomination, Sen. Ted Cruz, in Washington to protest the Iran deal. In a statement, the Cruz campaign confirmed the event said its specifics are still being worked out.

Trump played down recent reports that he was beginning to seek out donations, after claiming for months that he didn't need anybody's money. He even said during the speech, to a partial standing ovation, that he wouldn't be controlled by lobbyists.

Politico reported that Trump attended a fundraiser for a super PAC trying to get him elected.

"All I do is some meet and greets," Trump said. "People ask me would I come and say hello. As you know, other than the little donations where people send in seven dollars and twenty dollars and even, you know, in some cases, hundreds of dollars. All I will do, on some occasions, I will do a meet and greet."

Anna Teasley came to the event as an undecided voter. She co-owns a paper distribution business with her husband in Easley, a suburb of Greenville, where she's lived for the last 30 years. Teasley says she came to the event out of "curiosity."

"It bothers me," Teasley said when asked about Trump's interactions with Fox News anchor Megyn Kelly. "It seems almost like an attack. But that's Trump. He is who he is. I think that might've been a little bit aggressive."

Teasley did go on to say, however, "He's shaking things up. We need a big shakeup."