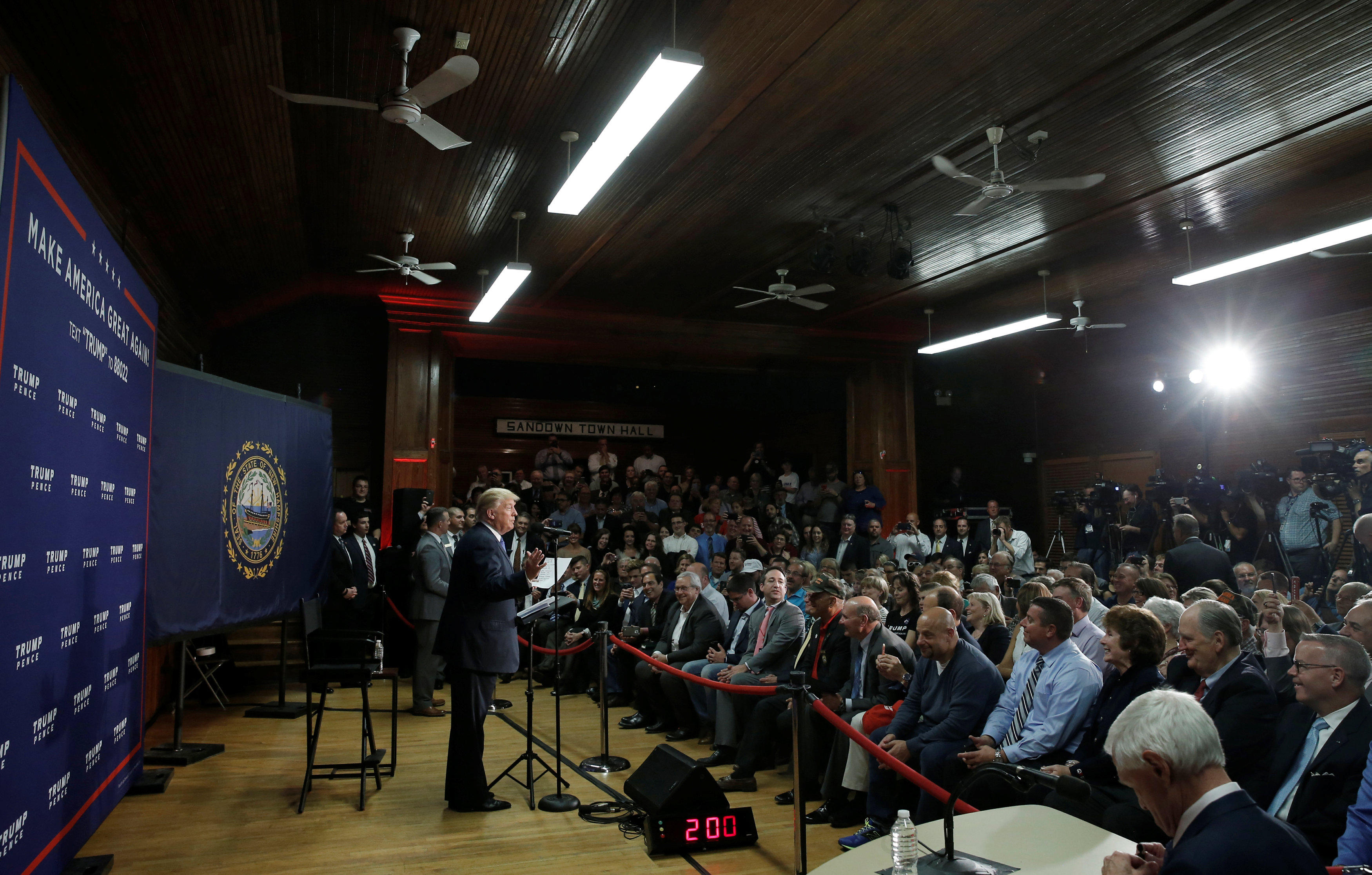 Donald Trump had planned to come to New Hampshire Thursday night for a town hall event, after having been urged by his advisers to practice for Sunday night’s town hall-style presidential debate against Democratic nominee Hillary Clinton.

But what happened in New Hampshire bore little resemblance to a true town hall.

The event, in Sandown, N.H., was invitation-only and emceed by a conservative radio host, who asked handpicked, pre-screened questions submitted by Trump supporters—including one from the co-chairman of his own veterans’ coalition. The inquiries ranged from what Trump would do about Hillary Clinton giving Social Security benefits to undocumented immigrants (which is not true) to whether he would throw out FBI Director James Comey, and there was even one query about his favorite childhood memory. Though the event was slated to last 60 to 90 minutes, it finished after barely half an hour and a dozen questions.

In other words, it was a very different affair than the time-honored tradition of open town hall events in New Hampshire—and almost certainly not what Trump can expect when he takes the stage in St. Louis Sunday night.

Trump denied that he was participating in the event as a form of practice for Sunday, saying “the narrative is foolish.” (Trump did not mention that he had a clock at his feet on stage, timing each of his answers to exactly two minutes.)

“It’s so disconcerting when you hear, even tonight, ‘Donald Trump is going to New Hampshire to practice for Sunday,’” he said. “This has nothing to do with Sunday—they make you, like, a child.”

He asserted that the event had been planned “a little while ago” and that his campaign was considering canceling it for debate prep—“I said, forget debate prep,” he said. “I’m here for one reason: I love the people of New Hampshire. I said I was going to be here and I’m here. Very simple.”

“Before we go any further, I want to send our thoughts, our hearts are with all of the people and prayers to the millions in the path of what’s now known as Hurricane Matthew,” he said. “It looks like it’s a big one and it looks like it’s going to be a bad one, it looks like. Hopefully it takes that right turn.”

Howie Carr, the conservative radio host, warmed up the crowd, saying: “We all love Trump, right?”

From there, the questions were all relative softballs for Trump. One questioner asked him what he would say to Hispanic voters who are “deceived by Obama, Clinton and the biased media.” Another asked whether he had “held back” when he debated Clinton in New York last week. A third ended his question by shouting, “Make America Great Again, baby!”

And a question about how Trump would fix the Department of Veterans Affairs (VA) came from Trump’s very own veterans issues co-chairman, Al Baldasaro—the man who said this summer that Clinton should be shot for treason.

Asked about whether he had “held back” during his first face-off with Clinton, Trump said he did, and that he wanted to stay out of “the gutter.”

“Yeah, I did hold back, I thought it was just inappropriate to say what I was really thinking I would say,” he said. “And I held back, I think, for good reason. I’d much rather have it be on policy and I didn’t like getting into the gutter and so I did hold back.”

Another question was about whether he would “clean house” at the Federal Bureau of Investigation, the Justice Department, the State Department and the VA.

The town hall resembled Trump’s rallies, but in miniature: at one point, he referred to the “Hispanics” that came to his rally near Las Vegas— “Latinos, they like to be called in that area,” he said. The GOP nominee also spent significant time bashing media figures from CNN’s John King to CNBC’s John Harwood to FiveThirtyEight’s Nate Silver.

About Harwood, who reported earlier this week that Trump was upset by what he saw as Mike Pence upstaging him with a solid debate performance, Trump said “this guy knows nothing about me.” “John Harwood was the worst moderator out of all the debates we had … he was so bad,” Trump said, to cheers. And Trump mocked King, incorrectly, for never becoming an anchor at CNN, saying he’s “like the enemy” and that he’s “still doing the maps.”

The event ended with what Carr described as a “fun” question from another audience member: “What was one of your earliest memories as a child, and why do you think it stands out—and then she says, ‘Go Donald,’” Carr said.

Trump told a story about playing with blocks at his father’s feet as he negotiated housing deals when Trump was a child. “It wasn’t that he taught me … but he’d be on the telephone negotiating with a plumber, or an electrician, or a sheetrocker, and I would hear this,” he said. “And I would be playing with blocks at his knee on the floor and I was just listening, and it was so vivid.”