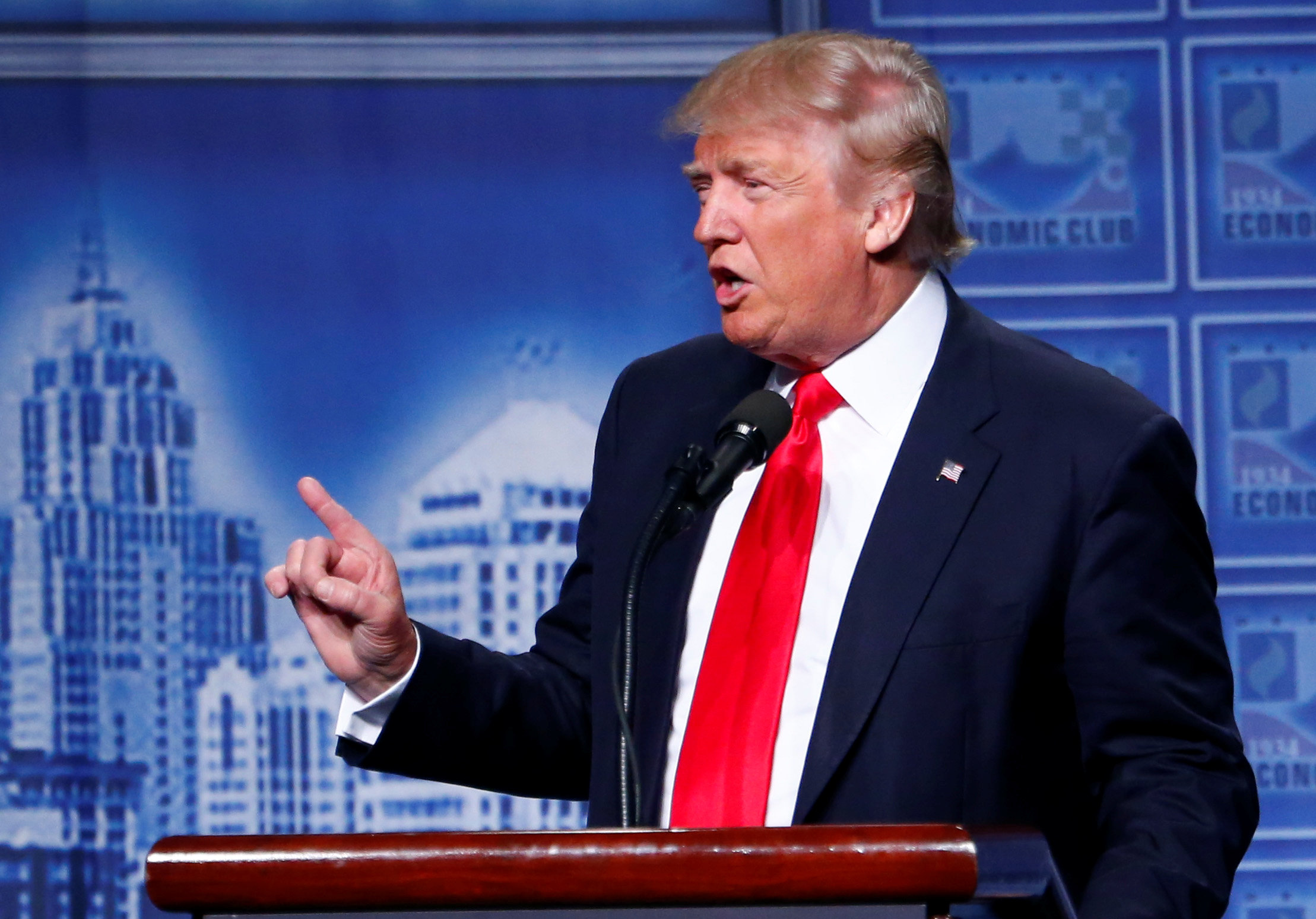 DETROIT -- Donald Trump proposed a significant increase of aid from the federal government to help families pay for childcare during a speech that was marred by protesters on Monday in Detroit, Michigan.

The GOP nominee, aiming to reboot his struggling campaign, called for making all childcare expenses deductible. Childcare has quickly become a very expensive proposition for many working families.

"They're suffering. They're suffering," Trump said in a speech to the Detroit Economic Club. "We're going to be getting them some much needed relief," before telling the crowd that he was working with his daughter Ivanka on the proposal.

The current tax code does feature a tax credit to help families pay day care and other such expenses. The Child and Dependent Care credit allows parents to claim up to $3,000 for the care of one child, or $6,000 for two or more.

However, the actual credit is a percentage of that - somewhere between 20 percent and 35 percent, depending on income. The higher your income, the lower the percentage is that you can claim, and the most that you can receive from this tax credit for one child is $1,050 for the year. The allowable expenses that can be claimed under this credit include nursery school, kindergarten and summer camps.

It was unclear whether private schools would be included under Trump's plan and the campaign did not respond to a request for clarification. The Associated Press reported that the proposal would have an income cap, but the Trump campaign did not confirm this independently when asked for comment.

What was missing from Trump's plan was any semblance of how he'd pay for such an increase in federal aid to families. When Trump initially rolled out his tax plan in September, it called for massive tax cuts for individuals and businesses. Last fall, the plan called for simplifying the tax code from seven brackets to four.

In a major shift, Trump announced that in his new plan there would be three brackets of 33 percent at the highest level, followed by 25 and 12 at the bottom end. In Trump's initial tax plan, the brackets were 0, 10, 20 and 25 percent.

This would've meant that tens of millions of households would be exempt from paying income tax. Under the updated version of the Trump plan, this appears to be no more. Trump's new plan would also hue closely with Republican House Speaker Paul Ryan's agenda, also unveiled recently, which put the tax rates at 12, 15 and 33 percent.

The rest of Trump's tax plan was largely the same as when he unveiled it last September. The corporate tax rate would be reduced to 15 percent from 35 percent, which is among the highest in the world. Trump said he would eliminate the so-called "death tax" - or estate tax - which taxes property valued at more than $5 million transferred to heirs.

According to the Tax Policy Center, the estate tax applies to roughly .03 percent of the households in the United States and if repealed, would cost the government more than $200 billion in revenue.

The Tax Foundation, in its initial analysis of Trump's plan last fall, said it would reduce tax revenues by more than $10 trillion and would therefore blow a hole in the federal deficit. Trump also has been steadfast in not wanting to touch entitlements such as Social Security and Medicare.

The money to fund Trump's proposal would have to come from somewhere. As of right now, it's not clear where. Trump has said in the past that it would be paid for with jobs brought back to the country, cutting waste, fraud and abuse from various government agencies, and repatriated money from companies that shelter profits abroad.

Trump's plan would benefit the richest in the United States most. In the Tax Foundation's analysis last fall, it found that the top one percent of earners would see a 21.6 percent increase in after-tax income under the Trump tax brackets.

On the other hand, middle-income taxpayers would only see somewhere between a three to eight percent increase. Making all childcare tax deductible would also likely be of more benefit to the wealthy.

The rest of Trump's speech was filled with familiar language from previous speeches on regulatory reform, trade and energy. He vowed to spend more on infrastructure.

"When we abandoned the policy of America first, we started rebuilding other countries instead of our own," Trump said. "The skyscrapers went up in Beijing, and in many other cities around the world, while the factories and neighborhoods crumbled in Detroit. Our roads and bridges fell into disrepair, yet we found the money to resettle millions of refugees at taxpayer expense."

Recently, in an interview with Fox Business Network, Trump said that he wanted to spend twice as much as Clinton on infrastructure spending. When he was asked how that would be paid, Trump said that it would be financed through government-issued bonds.

In a section on trade, Trump blasted free trade agreements, reiterating that he would not allow the United States to take part in the Transpacific Partnership, the multinational trade deal also now opposed by Democratic nominee, Hillary Clinton, and that he would renegotiate the North American Free Trade Agreement (NAFTA).

On energy, Trump portrayed himself as the protector of the coal industry, saying that steel and coal jobs would return, although he did not specify exactly how that would happen.

The Republican nominee was repeatedly interrupted by protesters during his speech - about 15 times. As one protester was being escorted out, he was heard yelling, "Tiny hands! All you got is tiny hands!"

The speech comes at a crucial time for the Trump campaign as a number of polls show the candidate's numbers in a free fall. In a new Monmouth University poll released Monday, Trump was down 12 points to Clinton (46 to 34 percent) nationally.

In new CBS battleground tracker numbers released over the weekend, Trump was down more than 10 points in Virginia and now, even the typically Republican-leaning Arizona may now be in play for the Clinton campaign.