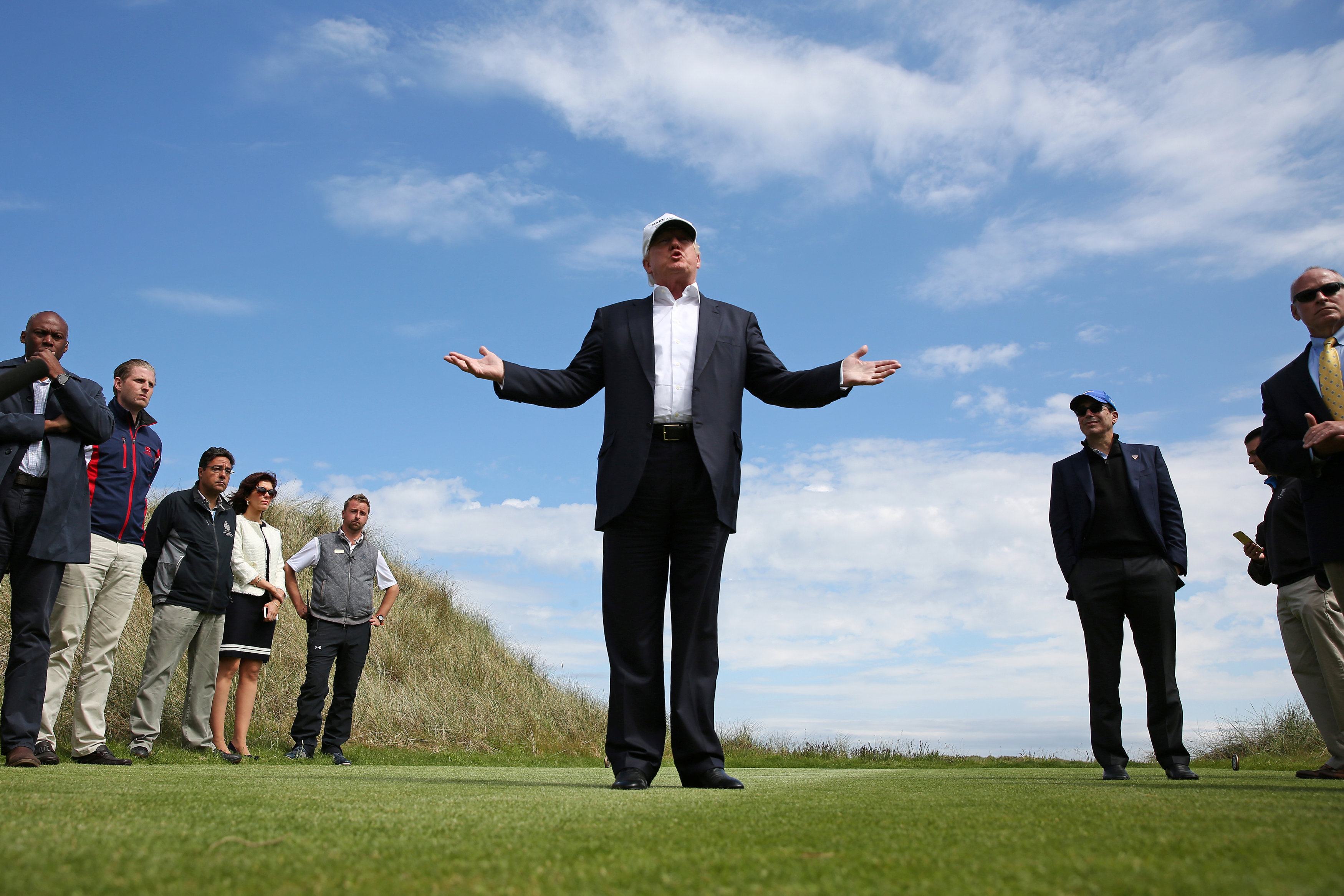 ABERDEEN, Scotland -- Confusion about one of Donald Trump's signature policy proposals reigned after he concluded his visit to Scotland on Saturday. Multiple media outlets reported that Trump was softening his plan to temporary ban from Muslims from coming into the United States. However, given different statements to various news sites, Trump's view on the matter seemed more muddled than ever.

When CBS News asked Trump, on a tour of his Aberdeen golf course, whether he would allow Muslims from Scotland or Great Britain into the U.S., Trump shook his head.

That "wouldn't bother me," the billionaire responded.

It seemed to be a softening of Trump's initial call, made in December, for a "total and complete shutdown" of all Muslims attempting to step foot on U.S. soil.

But in a statement to CBS News, Trump's spokeswoman, Hope Hicks, said, "The position stated today is consistent with his speech two weeks ago."

Here's what Trump said at that speech in New Hampshire:

"It will be lifted -- this ban -- when and as a nation we're in a position to properly and perfectly screen these people coming into our country. They're pouring in, and we don't know what we're doing. The immigration laws of the United States give the president powers to suspend entry into the country of any class of persons," he said at Saint Anselm College. "Now, any class -- it really is determined and to be determined by the president for the interests of the United States. And it's as he or she deems appropriate. Hopefully it's he in this case."

And then later in the speech: "When I'm elected, I will suspend immigration from areas of the world where there's a proven history of terrorism against the United States, Europe or our allies until we fully understand how to end these threats."

Trump's speech did not clarify what countries of the world this would encompass - and whether this would mean all immigration from those countries, including non-Muslims. Additionally, it did not specify what "proven history of terrorism" consisted of. For example, does that include countries where Islamic terrorism has been committed - say India? Asked repeatedly since the speech, the campaign has not clarified.

On Saturday, Trump seemed to say in a Daily Mail interview that the ban was being lifted if would-be immigrants were "very strongly vetted":

It was not clear what Trump meant by strongly vetted - and whether this meant a ban.

To The Washington Post, the Trump campaign sang a similar tune. This is what the Post reported:

Hicks said in an email that her boss took this new position -- which is a dramatic scaling back of the position he first took in early December -- during a policy speech nearly two weeks ago. In that speech, Trump did not mention Muslims and called for a temporary ban on "certain people coming from certain horrible -- where you have tremendous terrorism in the world, you know what those places are." At the time, it appeared that Trump was expanding his ban to include more people, not limiting its scope.

However, later in the same piece, the Post wrote: "Afterward, Hicks said in an email that Trump's ban would now just apply to Muslims in terror states, but she would not confirm that the ban would not apply to non-Muslims from those countries or to Muslims living in peaceful countries."

Trump said to CNN later in the day that he would focus on "people coming from the terror states" and "we are going to be so vigilant."

He did not clarify what he meant by "terror states."

The Trump campaign was asked repeatedly for clarification, including the question, "Is there a temporary ban on Muslims coming into the U.S. or not?"

It has thus far not answered the questions. So does the Muslim ban still exist? We don't know, but according to the campaign, his position has not changed since his speech weeks ago.

While strolling through his Aberdeen golf course, Trump also addressed a number of other issues, including the recent British referendum to leave the European Union known as Brexit -- a vote that sent international markets spiraling into chaos on Friday.

But Trump didn't seem overly concerned about the state of the economy post-Brexit.

One reporter questioned, "Do you see the turmoil we're seeing in the markets?"

Questioned on how he would feel if the state of Texas were to secede from the U.S. in the same manner as the United Kingdom, the real estate mogul predicted that it would never happen.

"Texas will never do that," Trump told reporters. "Because Texas loves me."

Texas -- a state that Trump soundly lost to Sen. Ted Cruz during the state's Republican primary -- would "never do that if I'm president," he said.

The billionaire cautioned, however, against total reliance on outside counsel before shooing journalists to the 14th hole of the course.

"What have these policy advisers done for us? Just take a look," Trump said. "Take a look at what the country policy advisers have done for our country. It's an embarrassment. Whole world is blowing up. Most of them are no good. Lets go to the 14th."