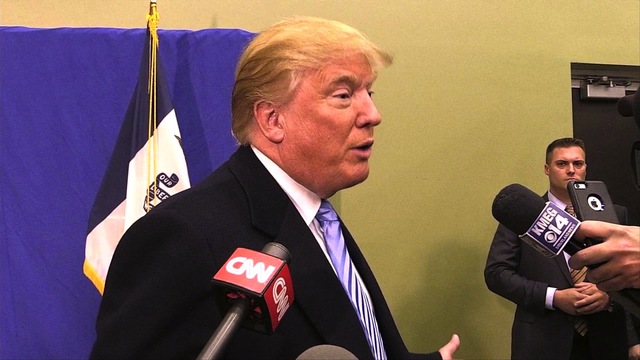 The lawyer for GOP frontrunner Donald Trump's corporate interests is responding to negative advertising against his client in a familiar way - by threatening a lawsuit.

The target is Mike Fernandez, a billionaire health care magnate and a Gov. Jeb Bush supporter, who started a newspaper ad campaign this weekend targeting Trump.

The ad, which ran in this weekend's Miami Herald, calls Trump a "narcissistic BULLYionaire" and likens him to dictators Adolf Hitler and Benito Mussolini. The advertisement was apparently not cleared by the Bush campaign, because Fernandez told the Miami Herald Friday that the campaign "chewed me out" after learning about the ad. It is set to run in other newspapers in early primary and caucus states.

Bush was asked about the ad this weekend on ABC News' This Week and whether he thought comparisons to Mussolini and Hitler were appropriate.

Fernandez also told the Herald, "If I have a choice -- and you can put it in bold -- if I have a choice between Trump and Hillary Clinton, I'm choosing Hillary. She's the lesser of two evils."

Fernandez posted a letter to Facebook on Monday that he received from Alan Garten, Trump's counsel.

"It has come to my attention that you plan on producing and disseminating certain radio, television and newspaper advertisements directly and personally attacking my client," the letter reads.

"Though we believe your decision is fool hearted [sic], please be advised that in the event your ads contain any false, misleading defamatory, inaccurate or otherwise tortious statements of representations concerning Mr. Trump, his business, or his brand, we will not hesitate to seek immediate legal action to prevent such distribution and hold you jointly and severally liable to the fullest extent of the law for any damages resulting therefrom -- and will look forward to doing it."

Fernandez included his own caption reading, "Only in America can an immigrant scare a #bullyionaire... If there is any damage being done to the Trump brand, it is by Donald Trump himself."

Bush's leadership PAC, Right To Rise, was also listed as a recipient on the letter. It is unclear as to why Garten included it as there is no evidence that there was any coordination between Bush's campaign and Fernandez.

This isn't the first time the Trump Organization has sent this kind of a letter to try to head off negative advertisement. Just last month, Garten sent a letter - with similar language - to an Ohio Gov. John Kasich-aligned Super PAC, New Day For America, in response to reports that the group planned on launching a $2.5 million ad buy targeting Trump.

The group responded with its own letter.

Later in the letter, New Day For America implied that Garten was breaking the law by using non-campaign stationary to send the letter.

"Moreover, with limited exceptions that are not applicable here, because The Trump Organization as a corporation is prohibited under federal election laws from contributing or coordinating with Mr. Trump's campaign, we were surprised to see that the letter came from you, as General Counsel to The Trump Organization rather than from Mr. Trump's campaign counsel. See 52 U.S.C. 30118. As you are probably aware, violates of the Federal Election Campaign Act can be subject to both civil and criminal penalties," it said.