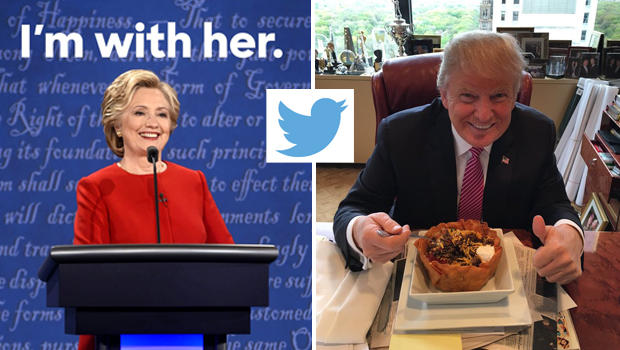 Some people have declared this the great Twitter election of 2016, and it’s hard to disagree.

With one candidate notorious for his 3 a.m. tweet-storms and another who has been known to release minutes-long videos slamming her opponent, one thing is clear: Twitter played a big role in this election.

In fact, the top two tweets the candidates posted this year are a back and forth disagreement between Donald Trump and Hillary Clinton over whether or not Trump should delete his account.

Between the retweets, insults and rants, Twitter users have had quite the show this election.

Let’s take a look back at some of the most popular tweets of the year.

2. A day after Trump’s wife, Melania, was accused of plagiarizing Michelle Obama in her her speech at the 2016 Republican convention, the GOP nominee fires back.

3. The taco bowl tweet was the talk of Twitter in May after Trump tweeted a photo of himself digging into a Trump Tower taco bowl, wishing his followers a “Happy #CincoDeMayo!” and declaring “I love Hispanics!”

4. “I never said I’m a perfect person”: Trump issues a late-night statement on Twitter apologizing for the 2005 conversation with Billy Bush where he was caught on tape boasting about grabbing, kissing, and trying to have sex with women.

1. Minutes after President Barack Obama endorsed Hillary Clinton for president, Trump couldn’t help but weigh in on Twitter: “Obama just endorsed Crooked Hillary. He wants four more years of Obama — but nobody else does!” Clinton fires back, “Delete your account.”

2.  While fact-checking the first presidential debate, Clinton’s campaign team digs into the archives to uncover a statement Trump made on climate change back in 2012, backing up her claim that Trump believes climate change is a “hoax.”

3. The Clinton campaign asks supporters to show that they’re standing with her on the night of the first presidential debate.

4. The introduction of Alicia Machado. Hillary Clinton releases a video of former Miss Universe Alicia Machado to highlight Trump’s problems with women. “One of the worst things he said was about a woman in a beauty contest — he loves beauty contests, supporting them and hanging around them — and he called this woman ‘Miss Piggy,’ then he called her ‘Miss Housekeeping’ because she was Latina,” said Clinton during the first presidential debate.

5. Clinton posts a video containing “Access Hollywood” footage from 2005 that shows Trump making lewd comments about women, along with a message urging women to vote.