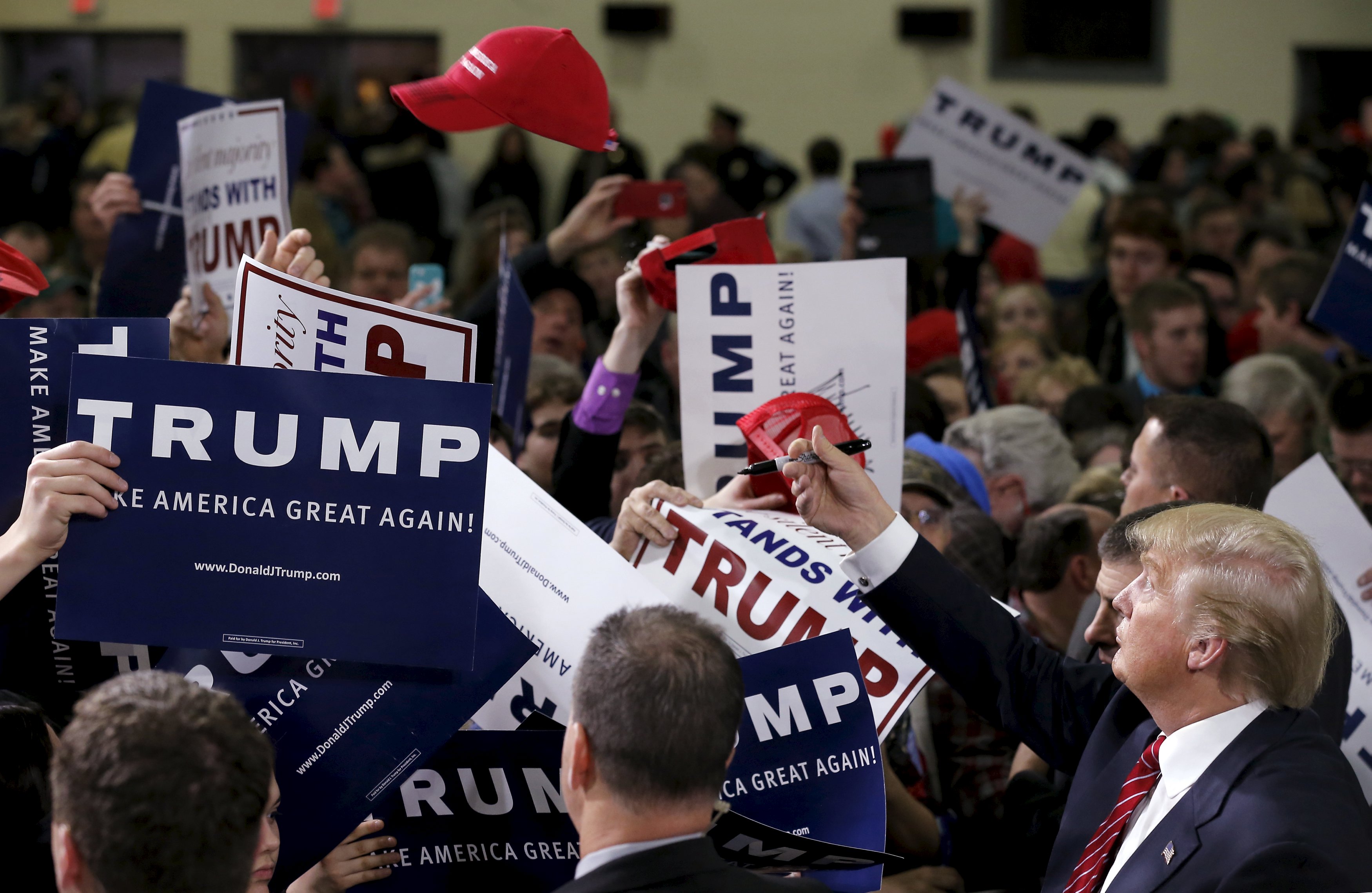 "We're building up numbers that are incredible within the Republican Party," Trump said on CBS' Face the Nation. "You've been seeing whether it's South Carolina or New Hampshire. I mean, the numbers are astronomical. And I don't think they've ever seen anything like this actually."

On Friday in Michigan, Trump declared the credit for the GOP voter surge belongs to him.

Then, with the kind of menace that he's practically trademarked, Trump added this:

"And if I ever left, they would go away."

The role Trump is playing in GOP voter turnout is central to his argument against an establishment-led effort to derail his pursuit of the nomination. Put simply, Trump contends efforts to defeat him will turn off the new voters he's brought to the table and thereby weaken GOP prospects in the general election.

But is Trump solely responsible for the surge in Republican turnout?

Trump has certainly won more votes at this stage of the GOP race than Mitt Romney. It's not even close.

But Ted Cruz and Marco Rubio have also driven turnout to new heights, and this weekend's results showed Cruz voters are just as tenacious as Trump's, and more than capable of propelling the freshman senator from Texas to victory.

The one place where this storyline falls apart is Puerto Rico, which Rubio won on Sunday. Turnout this year was far smaller than 2012 --36,660 compared to 128,834 in 2012. Romney won the Puerto Rico primary with 106,431 votes compared to Rubio's 27,485. Rubio still collected all 23 delegates up for grabs but did so in what -- from a turnout perspective -- looks more like a forfeit than a clear-cut victory over his GOP rivals.

The weekend's results reinforce a sustained increase in Republican turnout. But they undercut Trump's contention he alone is responsible for the phenomenon.

"He's playing the American public for suckers," Romney said, adding that flirtation with Trump was "improvident."

This makes for a pretty sharp contrast: a candidate who says he deserves credit for rebuilding a moribund party against that party's previous nominee, who argues he's killing it.

One metric for deciding who is right can be found in the votes cast so far. By that measure, it turns out Romney's argument is mathematically weak and politically suspect.

The 2016 nominating calendar is different than it was in 2012, but so far Romney and Trump share 18 contests in common over roughly the same number of days: Iowa, New Hampshire, Nevada, South Carolina, Alaska, Alabama, Georgia, Massachusetts, Minnesota, Oklahoma, Tennessee, Vermont, Virginia, Kansas, Maine, Kentucky, Louisiana and Puerto Rico. The one big calendar and process outlier is Kentucky -- it held its 2012 primary on May 22 and its caucus Saturday.

That's right. The Republican who wants to deny Trump the nomination collected more than one million fewer votes than Trump through the same 18 primaries and caucuses. The precise Romney deficit to Trump is 1,016,227 votes.

That is not a rounding error.

Trump can reasonably ask what Romney knows about the current conservative movement or winning or energizing Republican voters. Trump more than doubled Romney's vote total in Virginia, Georgia, Alabama, Tennessee and Nevada. He beat Romney by more than 72,000 votes in South Carolina, more than 46,000 votes in Massachusetts and more than 15,000 in Iowa. Even in Kansas and Maine, where Trump lost badly to Cruz, he beat Romney by 10,812 and 3,880 votes, respectively.

Does this prove Trump is remaking the Republican Party by himself?

Trump is a big factor. But so are Ted Cruz and Marco Rubio. Both are driving voters to the polls in nearly the same numbers as Romney as Cruz has won six states and Rubio only one and Puerto Rico.

These totals only reflect the 18 contests this cycle shares with the 2012 cycle over roughly the same time (meaning minus Texas and Arkansas). If you look at delegate allocations for those 18 states, Trump has 317, Cruz 180 and Rubio 133. Cruz has done more with his votes in terms of capturing delegates than Rubio.

Another way to look at the multiple layers of energy within the new GOP is Trump is more than a million votes ahead, Rubio's total is 56,418 behind and Cruz trails by 62,746. That's three different GOP candidates in 2016 with vote totals that obliterate Romney (Trump) or that run competitively with him (Rubio and Cruz).

The GOP field has three proven vote-getters who have expanded the attractiveness of the party, energized base voters and brought new ones into the process. There is no question Trump has driven turnout higher. But so have Rubio and Cruz.

In addition to the vote totals in Kansas and Maine that demonstrated the effect of Cruz's voter appeal and mobilization on turnout, one last statistic illustrates the point. Turnout in the South Carolina primary increased by 136,701 votes but Trump's winning total was 3,321 lower than Gingrich's in 2012. Not all increases in GOP turnout are attributable to Trump.

As for Romney, whatever his reservations about Trump, he is not in the same league in terms of drawing crowds, generating enthusiasm or garnering votes.